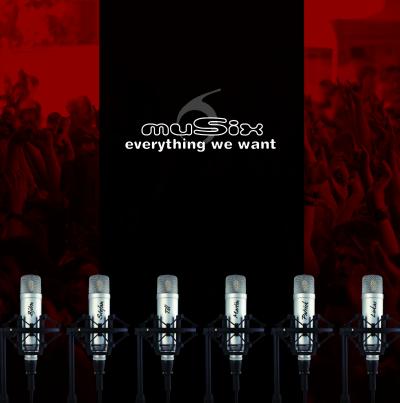 muSix's album Everything We Want is a solid and engaging addition to professional male pop a cappella. There's nothing groundbreaking here from this German group of seven men, but a lot to be proud of and certainly worth a listen by anyone who is particularly into this piece of the genre.

In the plus column, some very fun production with cool but appropriate effects, generally excellent arranging and block singing, and a constant fun energy that permeates the whole disc. The group does a fun mix of covers that stray a bit from the beaten path — Jamiroquai, Terence Trent D'Arby, and N*Sync (albeit the German translation) all make an appearance here. Most of it works, particularly the scorching opening track, the cheesy but fun Just An Illusion, and jaunty energy of Delicate.

On the other side of the line, solos were quite average — not bad, but not great. In particular, I found the head voices of most of the soloists to be a bit grating; given how often they were used, this was not a good thing. From an American perspective, enunciation inflections on songs like Sledgehammer and Everything You Want prove to be a bit distracting as well. I have no doubt my attempts to sing a German hit pop single would prove far more disastrous than muSix's highly competent work. I suppose such direct comparisons are unfortunately just part of the game when doing covers of such well-known tunes. The originals were fairly weak - Autosong was a creative if ineffective mix of randomly chosen pop song snippets juxtaposed against a vamped chord progression and Tribute's chorus made me want to throw my CD player out of the window. How the group can sing "What about friends ba ba — what about love ba ba - what about sex ba ba — you can't imagine how tender I am to myself" with a straight face is beyond me. The Poison Of Love, while a bit overdramatic with its whispered ominousness, was a bit more tolerable.

But enough nitpicking — the vast majority of the album was quite listenable, had my foot tapping, and even had me rewind a few times to catch a particularly pleasing moment of harmony or production (which is my the real litmus test for an album). While the album is far from everything you'll want from a professional group, it's still pretty darn good.

The second track on muSix's second album Everything We Want is the Vertical Horizon cover Everything You Want. So a natural progression/reaction would be to say that this album is everything I want. That statement is just short of being true, unfortunately.

Artistically, the album does have almost everything that you could ask for in a pop a cappella album — a few nice dance tracks, some Delicate rhythm & blues ballads, a hint of jazzy-soul leanings, a couple of interesting originals and more than a few stellar covers. The track Autosong is a prime example as it samples lines from some twenty different songs and genres of music... all to an exceptionally pleasing hodgepodge of a song.

muSix performs a satisfyingly diverse mix of tunes for its audience without straying too far from a cohesive repertoire. The major lacking point is the tendency to slate a lot of the mid-tempo numbers back-to-back. While this can create an overall pleasing soundscape when you are in a "chill/laid back" vibe, the middling of the tempos can drain a listener's patience. From their website: "Sometimes seductively gentle and sensitive, sometimes rhythmical and loud. A variety, which really reaches everyone, dance bear and snuggling mouse alike." I'm sure live, the energy of the performance is heightened... here, I'm almost lulled into moments of false serenity.

Musically, the group has a firm grasp on what it takes to achieve perfection. Brilliant tuning and inflection by these six German lads may be the final evidence needed to firmly establish English as the universal language of music — displacing Latin's former stronghold. Vocal Percussionist Patrick Oliver not only lays down some solid (and unobtrusive) drum lines, but is also the major arranger for the group. He is, in a word, gifted. He penned Tribute — the most tongue-in-cheek ode to narcissism I've ever encountered. But Oliver's arrangement deftly conveys an egoist's literal "self-love" through a tender love song. Yeah, you just have to hear it.

Vocally, all of the guys in the group have excellent voices, but two stand out as the stars and backbone of their prowess. Lukas Teske has a great lead tenor voice. He makes you pay attention every time he opens his mouth, feathery light like Terrence Trent D'Arby in Delicate to the sexy growling swagger of Jamiroquai's Jay Kay in the opening Canned Heat. Martin Hagen's baritone is to be envied. He brings a warmth and maturity to his tracks that is drool-worthy, especially the haunting Freisein.

The production on the album is top notch. Teske's mixing is clean and crisp where it needs to be but experimental enough in areas to create a sound that is definitively muSix. And for a young group of twentysometings, self-production can be a terrifying experience. I'll even forgive them for switching tracks 13 & 14 on the recording (Freisein and The Poison Of Love) and correcting the mistake on the liner notes. That's an oversight that someone on the production team should have caught.

I wavered a great deal on which score I'd give the album overall. I love the album and definitely recommend it for any pop enthusiast, but I need a little more "oompf" from the recording to feel comfortable placing this in the top tier.

I've been waiting to use that one ever since muSix's CD came in the mail all the way from Germany. It means, "Have you heard the German band?" (and comes from Broadway's "The Producers"), and really, I ask the question, because if you haven't, I think you should.

Pop-driven, bouncy, and full of hits, Everything We Want has just the right amount of drive, quality production values, and diversity of repertoire to satisfy a number of listeners out there. From Jamiroquai's kickin' Canned Heat all the way through to Genesis' high energy Land Of Confusion and everything in between, there are a bunch of tricked out tracks that showcase great arranging, nice solo work, and production mastery. Three originals (not bad, considering English isn't their first language, but none will win any awards for orginal lyrics) also pepper the album with a unique flavor, but one particular track is bothersome. It's either one great big inside joke or a Tribute (no kidding) to masturbation. "I don't need anyone besides me... No one, nobody loves me more than I do... You can't imagine how tender I am to myself." I don't know, dear reader. You make the call.

Lots of tracks here are reminiscent of old school Five o' Clock Shadow repertoire here but are done rather freshly and with great style. The Poison Of Love stirs up better bass work and a smooth blend of background voices behind a soulful, sexy solo. That's Just the Way It Is is perfectly evocative of Phil Collins' original with the signature sound of the pitched percussion and a beautiful "unaccompanied" refrain in the middle.

You've all heard Will Dich Zuruck, believe it or not. It's a translated version of N*Sync's "I Want You Back" and is probably one of the weaker tracks appearing here. While the arrangement is catchy, the solo work and German lyrics seem to take away some of JT's edginess heard in the original; it's a little bit prettier than you'd imagine. The glottal sounds not heard in English, however, remind us listeners that really, we're not in the U.S. anymore. But still, I'm rather impressed at the percussion and tenor, which really hold the piece together. The bass fails to keep the energy going by repeating the title lyrics at a place where, in the original, guitar and synth work sharpen the space between verses and really make the song pop.

This disc made me a fan of this Berlin-based boy band. While I'm not terribly drawn to the individuals as soloists, I think it has less to do with their talents and more to do with the manifestation of English words through the interpretation of German speakers. The arrangements are unique to muSix and show a kind of European sensibility toward a cappella missing from most of our genre's mainstream groups in America. For a change of pace, pick up Everything We Want and hear the German band.

You can order the CD on the group's website or by emailing contact@mu-6.de.