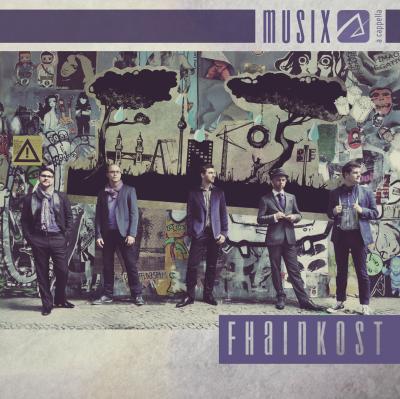 If you love Owl City, but desperately wish that they were a German a cappella group, your prayers have been answered.

Certainly, muSix has a wider palette than Owl City — meine liebste and koffer sound like reggae and ich kann nichts dafür, ich bin so even ventures into the kind of punk that Oingo Boingo would have been happy to perform. But the group's primary sound is sweet, clever electronic pop.

Not-so-recent advances in studio technology mean that the choice to perform a cappella hasn't been a truly timbral limitation for almost twenty years. What many groups struggle with is keeping a semblance of soul and a sense of proportion. Mults, effects and sweetening tracks can bury a group's identity as much as enhance it. muSix fully embraces technological enhancements on almost every song, but having defined its genre, the group doesn't become drunk with the technological power of unlimited tracking. muSix arrives as a small synth-y ensemble, not an army of vocobots.

Sixteen tracks full, fhainkost wows listeners with a complete hour of incredibly listenable and inventive music. True, there's not much for purists other than weisst du and often not much more discernible singing than one hears in non-a cappella. But the process, however circumlocutory, however processed, however accomplished still results in a cornucopia of terrific music.

The boys from Berlin are back! André Bachmann, Till Blumenthal, Stefan Flügel, Patrick Oliver and Björn Sterzenbach of muSix have released fhainkost — a pop confection that is tuneful and thoroughly enjoyable even if you don't speak a lick of German. Taking the genre's name at its word, these sixteen tracks are unabashedly sunny and unadulterated fun.

Looking at some of the translations of the song titles, the guys really know how to make some silly sounding songs seem serious (Yes, yes I did just write that!) like blinddate and peilo. And they really know how to rock it out with ganz ganz oben. But as usual, the tracks that really touch my heart are the languid melodies: kopfsprung, ich will mehr, and my favorite track on the album, sommer. sommer is straight up fantastic and completely spellbinding. Go to the group's website to listen to the clip. Then come back and thank me for making your day magical.

There are strengths galore on the album, but the main one is the effortless shift between natural sounding backgrounds to full-throttled studio pyrotechnics. The group can be gritty and raw with a sense of urgency, and then immediately turn around and be mesmerizing and engaging with electric guitar. And even though the album starts out a bit slowly, the energy and tempo pick up after a few songs and drives to the end of the disc.

At least two of the songs bring to mind other watershed songs that rocked the a cappella world. ganz ganz oben and sommer sound like they could have been lifted right off of Streetnix's genre-changing Ignition, and sonntag will make you remember why you originally fell in love with that shoegazer anthem Fireflies. Meanwhile, the opening phrases of blinddate will have you humming Fork's My Sin.

One can sense the camaraderie among the singers during each of the tracks. It's the perfect example of what being in an a cappella group is all about. Even if the harmonies aren't always technically aligned, or the intonation is an acquired taste, you can hear every moment of group unification throughout the disc. Every uttered sound from the singers means "I've got my muSix brother's back". The members support each other so well that the sounds become secondary to the emotions — though not overwhelmingly — and that is definitely transfixing. For someone who understands little to no German except for English cognates, it has to be to get caught up in the joy being delivered.

fhainkost is a fun listen. Give it a try if you like your pop songs with a cheeky flair.

I really wish I was better at German. fhainkost is a vibrant, exciting album filled with original material, and I struggle to understand a word of it. So, I will tackle this album from a purely musical standpoint and sadly eye my high school German textbooks, filled with regret.

What really stood out to me upon my first listen of fhainkost is muSix's exceptionally strong group sound. Leads and solos are distinct and well-executed, backgrounds are tight, and bass/vp is vocal-focused without sounding hopelessly old-fashioned. The songwriting is effective and simple, with muSix hanging out in pop playgrounds that accentuate its quirky nature. This is not to say this a bubblegum album; muSix tackles rock and hip-hop tracks with the same infectious quality.

muSix is clearly interested in experimenting in the studio, and for the most part fhainkost presents a picture of the studio as an enhancer. I loved the Phaser-laden bass vocal that opens flieg, and the Wah pedal effect on machen dich frei. Distorted vocals inhabit much of the album's soundscapes; there are points where I have to take muSix at its word that they are using entirely human vocals.

Something that worries me about a cappella sometimes is when it is treated as a genre in and of itself. It's not a genre, it's an instrumentation. To think of a non-a cappella group releasing an album that features songs as varied genre-wise as fhainkost would be inconceivable, but versatility has always seemed to be the name of the game in a cappella. I would suggest that muSix consider narrowing its focus for the group's next album — finding what the singers are strongest at musically and allowing their strengths to shape a strong album that happens to be performed a cappella.

To order this album, send an e-mail to shop@musixonline.de or visit the group's online store.