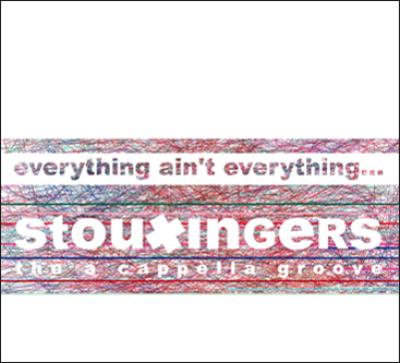 American vocal jazz apparently lives in Europe now. Germany's Stouxingers have come sizzling out of the Manhattan Transfer tradition with a verve I haven't heard from an American group in years. The songs are hot, the blend locks and the solos are superb.

Snows in April is the standout on a standout disc. Its luxurious, liquid arrangement oozes around this Prince song, aided by a lovely tenor solo and a few well-placed dissonances. The Stouxingers inhabit it, leaving its origins behind in marvelous fashion. Their version of Stevie Wonder's I Wish is more conventional, but able to hold its own with m-pact, the Logarhythms and the other great covers that came out last year. Harlem Nocturne and Father, Son are slow and lovely, while Du Bon Son is far catchier than most of the Europop that makes its way across the Atlantic. It's also an original, composed by the group's star arranger Michael Eimann with text by soloist Konrad Zeiner.

Waiting is this album's weakest point, which is still stronger than a lot of other groups can manage. The song isn't very interesting, nor is the homophonic arrangement, and the group's non-native English comes to the fore in a way that most of the other numbers avoid. Still, the tight blend and catchy energy get the album off to a good start.

One of the best things about this disc is the incredible blend of the group's four men and four women, who each have their own distinct timbre yet are able come together in oscillating horn riffs or old-school block chords. The swing is omnipresent, yet it varies to suit the mood of each number. I even liked All My Loving, despite my general blase reaction to anything Beatles.

Everything Ain't Everything is vocal jazz at the top of the game. If that's your thing, this will be too.

I haven't been so moved and fascinated by an organic pop/rock sound since I first heard SoVoSó's Thank You. That's the kind of feeling this German octet of performers give you when listening to their new album Everything Ain't Everything. No heavy processing to cloud the pleasing vocal quality of the singers. The men and women are talented; there is a joy in their music that comes across in the arrangements and soloists.

Jazz and gospel influences permeate the group. Their sound is all very earthy and urban and totally contagious. According to their website, the decade-old group started out singing spirituals and gospel numbers. The tracks feature lush chords enhanced by syncopated rhythms and a kicking swing you can only achieve when you are truly singing in the pocket.

Several tracks completely captivate the listener and propel this album over the average hump. Harlem Nocturne is not to be believed. To use highly clichéd descriptors (but so apt nonetheless), the Stouxingers create a bed of plush voices, with soloist Katharina Debus a heavenly blanket of melancholy in this haunting lullaby. Du Bon Son sounds like it has been plucked right from The Manhattan Transfer's genre-blending and GRAMMY®-winning album Brasil. There is a great crispy edge in this Latin-flavored number.

But the capper is Sometimes It Snows In April featuring the group's arranger Michael Elmann. I have to give them kudos for digging into the "Prince" of music's repository to pull this oft-overlooked gem from Parade. This is one of my all-time favorite songs, and they do a stellar cover. It's soothing and riveting at the same time, lulling you into a false sense of security while ripping your heart with the thought of losing your best friend. The guttural scream partway through the track establishes perfectly this clash of turmoil and tranquility ... emotions running so deep you don't know whether to scream or cry. Man.

On the flip side is the out of place ditty Why Do Fools Fall In Love, the first song that I arranged when I was in college. (Some say it should have probably been my last.) Memories! Regardless, they tread on dangerous waters with such a kitschy song on an otherwise solid album. The jazz scat in after the second verse keeps the interest on an otherwise deadly dull song.

If you like your music highly nuanced and slighty adorned, Stouxingers' Everything Ain't Everything is the jazz/pop album to get. They describe themselves as an emotional and groovy a cappella delight. I couldn't have put it in better terms myself.

"We've been waiting for so long / We want to sing for you some of our songs ... / We've got so many songs and stuff to do / We're making this concert especially for you ...".

The lyrics above are from the Stouxinger's opener, Waiting. What a thoroughly vapid way to welcome a listener to an otherwise respectable album! Since the group felt the need to put crap at the beginning of the album, I feel it is only fair that I mention at the beginning of this review that the song is crap. And on we go...

Other than one bona fide clunker, there really isn't much additional negativity that can or should be drudged up regarding Everything Ain't Everything. The group spans a variety of musical genres without spreading itself too thin, which is rare. The group goes from a jazz arrangement of All My Loving right into a dazzling rendition of Ellington's Harlem Nocturne, followed with doo-wop, Prince, Stevie Wonder and some French rap. Looking at the track list one would expect variety for variety's sake, but the group stays true to its "sound" throughout the disc.

Speaking of Stouxinger's "sound", although the men are certainly adequate, it is the unique strident quality of the female voices that make the group stand out. The a cappella world is filled with sweet blendy voices; these women tend to side towards brassiness which is actually helpful in most of the tunes they've chosen. This is especially the case with Harlem Nocturne — the ladies do the blendy thing where needed, but also convincingly performs the dirty, gritty stuff that is hard to do.

The overall scores tended towards "4" because just about every tune is truly good. There are very few apparent mistakes on the album, performance-wise and recording-wise. The recording levels are robust and with a good balance between the soloist, backing voices. The bass is thick and warm, while the drums are solid, although occasionally mechanical or overly busy. Nonetheless, the scores mostly did not reach a "5" because as good as they may be, they lack an amazing musical moment, an infectious groove, or some other unforgettable, superlative quality.

All initial "crap" comments aside, these crazy Danes have produced a commendable work. The disc does not fall among the upper eschelon of recommended discs, but would certainly be an asset to many a discerning a cappella listener's collection.

Order via Mainely A Cappella or directly from the group's website.