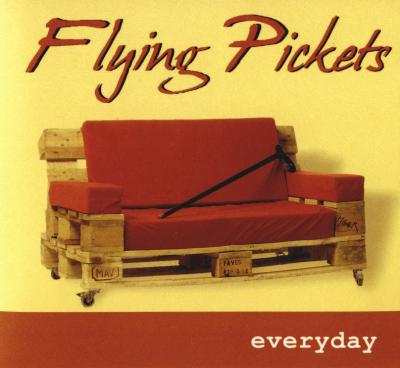 Simon John Foster, I bow to you.

OK, so I'm supposed to be reviewing Flying Pickets' new CD Everyday, but I can get that out of the way pretty darn quickly. It's fantastic — a no-brainer as a 2004 CARA nominee for Best Pop/Rock Album. It's exactly what you'd expect from the Pickets, and they don't disappoint. Solid grooves featuring spot-on VP, tight singing, interesting and different arrangements (wasn't sure the first track really was Everyday Is a Winding Road until about a minute or two into the song), brilliant solos, generally impeccable blend, and a healthy dose of covers and originals. Sure, there are some low 5s (the originals on this album — with the possible exception of the final lullaby — are a bit weaker musically, and especially lyrically) but overall, it's unquestionably excellent and as good a pro album as you've likely heard in a while, up there with the best in the biz.

There. Done. Buy the album. Go.

So if you're still reading, let me say Simon John Foster alone is enough reason to buy this album. Take Stevie Wonder, Joe Cocker, that dude from The Commitments, Michael McDonald, and maybe Steve Perry or Dennis DeYoung and roll them up into one and you get something resembling the virtuosity that Simon John Foster shows off on Everyday. "Wail" is an insufficient word since it would seem to lack a certain finesse and style; "blows the roof off the place" is a bit of an exaggeration, or at least an injustice, as it's not the power (at least not solely) that makes Foster's voice so impressive; maybe the only way to go is to move to a more generic metaphor. Yeah, I think that would be better, so let me put it thus:

Love Rears Its Ugly Head had my mouth open, and it turned out to really just be a warm-up for what was to come. Roxanne will leave your head shaking — it's deconstruction taken to the limit, but that killer solo coupled with some crafty VP and bass work make it impossible for the listener not to be impressed. On I Keep Forgetting, your amazement will continue, culminating in the two words I typed into my computer when I listed to Long Train Running — namely, "holy crap!"

This may be the easiest review I've ever written (it's certainly the least journalistic and, much to my editors' collective delights, the shortest). Buy this CD. Chances are you'll love it anyway and even if you're not as impressed by it as I was, I dare you to not be in awe of ... yup, you guessed it ... Simon John Foster.

Talk about taking suggestions from a panel of reviewers and turning out an amazing product. The Flying Pickets have produced one of the best albums of 2004 and 2005. Possibly a decade from now I'll still be extolling the virtues of Everyday.

To quote myself in regards to the Next Generation album: "I want a studio album from this group — that album is going to be O.O.C./O.T.C. — out of control and off the chain." Hip, funky, pleasing, intoxicatingly soothing and sensual, Everyday fills all of your pop/R&B needs. It seems that even professional groups can benefit from the comments that we make here — that's priceless.

Oftentimes simple (the tender, straightforward cover of Tracy Chapman's Fast car, the bare-boned and sublime Roxanne, and the gorgeous Here Comes the Flood), sometimes ethereal (the James Warren-penned Everybody's Got to Learn Sometimes), and all the time amazing (especially with Everyday Is a Winding Road and Keep Forgetting), The Flying Pickets have stepped up their studio game in ways I only dreamt about on the last album.

The songwriting is as tight as ever on this album. Four of the songs on the album are originals penned by group members or for the group. Chapel on a Cloud by Michael Henry is probably going to be the breakout hit. It's a fun pop number, though a bit confusing. I'm not sure what a chapel on a cloud (which makes me think of the child auditionee de facto ballad from Les Miserables) has to do with getting your partner to communicate with you. But not everything can be black and white, I guess. My personal favorite, though, is Dylan Foster's Perfect Day. The song is just that — perfect: succint and personal lyrics, Foster's delicate tenor gliding effortlessly through the lyrics, lush background vocals, and a rhythmic pocket that propels the energy forward.

CASA ambassador Andrea Figallo is a gifted arranger, crafting the current sound of the group through his music making. He's creatively exploited the talents of each of his bandmates to a soul-baring sensibility. The one reservation I have is his use of "fa" in what seem overly exposed moments especially in the opening track.

The singing is as incredible as it was on the live album. New Picket Simon John Foster (he joined in January '04) brings a rock element to the group with a guttural delivery on Long Train Running.

The one detraction is that most of the songs are mid-tempo, so there isn't a lot of diversity in aural experiences. It's such a minute problem that I was reluctant in addressing it, but I can't have an overly glowing review lest I lose my curmudgeon card.

Get Everyday. I'm sure you'll listen to it as often as the title suggests.

Everyday is an impeccably polished product geared for mass consumption. This is the most Top 40-friendly album I've reviewed, following a template straight off the radio: loud leads, loud bass, thumping percussion, lots of harmonies and arpeggios, and a bunch of other background stuff that is neatly but softly woven into the sound.

The result is an excellently made album that could easily become a blockbuster. The group takes few risks, and it certainly isn't my favorite genre, but one has to appreciate an almost perfect album upon hearing it.

This album is a marvel of engineering and production; the album oozes with professionalism, top-notch producers, and lots of money. There isn't a single wrong note, an off-beat rhythm, a vowel not perfectly blended, or a line sticking out. The bass line is especially strong with true sonic resonance, excellent pitch and tonality, and tremendous energy. The album is an excellent example of a super-produced album not sounding super-produced, and it is palatable for the general audience.

Soloists for the most part are great (again with lots of help from the studio). Keep Forgetting stands out with a smooth and soulful rendition, and the scatting in Roxanne is also excellent. The one exception is Everybody's Got to Learn which is clearly out of the soloist's range.

I was disappointed with the number of covers from such a high-caliber band, with only a few originals. The originals definitely stand up with good songwriting, so branching out and writing some more would be a great improvement. The arrangements are creative and rarely simply mimic the original. Roxanne is a standout; with only a lead, percussion, and bass this pared-down cover works great in the middle of the album and shows off the group's strongest elements.

Overall, this is a great album. Despite its unabashedly pop-infused and profit-driven musical formula, the caliber of performances and production is simply too great not to enjoy.

To order the album, visit Mainely A Cappella, Primarily A Cappella, or Amazon; or contact the group directly at manager@flyingpickets.com .