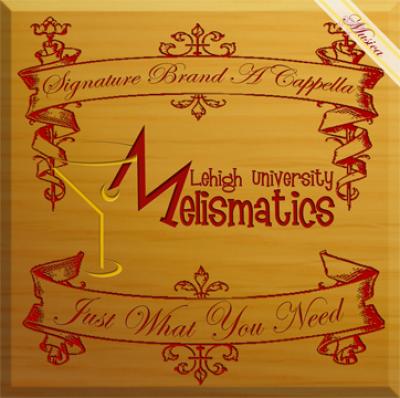 The Melismatics are at their best when they are off the beaten path. Short Skirt, Long Jacket is not in tune, not a fancy arrangement, and not always easy on the ears. But it's one of the more brilliant college a cappella tracks I've heard all year. All praise to Andy Rosenbloom for a take-no-prisoners lead that drives the song and gives the background something to hang on to.

Arranger Brett Philpotts has an ear for that kind of stuff, for things that take a tired old formula — 15 college students! pop music! no instruments! — and add a new twist. His album-opening spin on Doin' Something has no words, tricky chords and the best performance of anything on the album. Over the course of his six contributions to this disk, he shows a number of good instincts, like an excellently deployed figure that periodically puts the basses in octaves with one of the upper voices, adding a drone or a pedal point to whatever else is going on. Whirlwind is a particularly good arrangement, with lively textures that swirl around the theme and a chorus hook that sounds India-inspired.

It's these touches of grace that balance out the rest of the album. It is, to put it bluntly, not very good. Most of the voices are game but mediocre, and most of the chords sag like a battered couch cushion. The blend is pretty sketchy, with a soprano or tenor often sticking out at random. Maybe it was intentional, or maybe it's just a bad mix job - either way, it rarely works. Drive is particularly inscrutable, with a lone bass, raw doots and a generally amateur performance. The Don't Stand So Close To Me train wreck at the end of With Or Without You is equally inexplicable — why crash there, after making it through so many tougher spots? The song starts off with a great falsetto hook (even if the block chords are often off-key) and our pal Brett keeps it going through the Maroon 5 interlude before disaster strikes.

As for the solos — Raina Savitsky (Are You Happy Now) is the best, followed by Derek Wilson. Few of the rest can really keep up, although fortunately nobody really screws the pooch. Overall, this album can't keep up either. Thank goodness it's got some new ideas for those of us who listen to it anyway.

Lehigh University's Just What You Need is an unintentionally avant garde bit of clean and occasionally jazzy cacophony for the thinking listener. Why is the soprano independently operatic? Why so many different syllables at the same time? Why such sparse vocal percussion? How do the arrangements have a simultaneous squareness and theatricality, yet also an easy pop delivery? I can't quite wrap my arms around this mixed ensemble. Is that good?

Take Superstition as an example. Derek's solo is very enjoyable; he conveys that perfect soul tone color with some juicy little licks thrown in for fun. The backgrounds are divided between dying feline guitars, blended, simple chord changes, and some respectable VP. The elements that don't seem to fit are so blatant as to make one wonder if these are choices. Despite the pop rep, the Melismatics really don't sound like any other group I know.

Purists should be drawn to the clean, uneventful production. And in general, listeners should be drawn to the group's calm, quirky charisma. The harmonies aren't rich. The wall of sound is more like a strangely carved, misshapen fence. In fact, there's something almost Brechtian about the Melismatics, as if they wanted to present raw, unadorned portions of a cappella for listeners to piece together on their own.

Often this works on some odd level. The Michelle Branch hit Are You Happy Now comes out as a cross between Rahzel, Nine Inch Nails, and a glee club. On the other hand, if intonation, blend, or tone color are important elements for you, you may have some trouble with this release.

I'm always pleasantly surprised by the generally high quality of a cappella albums engineered in whole or in part by a member of the group. Consider Mikey Vu's work with Octopodes. Or Tom Baran and the 'Mates. Or James Gammon with AVP and the Sils. Dizno and the Aires. My Columbian colleague Jon Spring and the Clefhangers. David Kang and Juxtaposition. (My apologies to anyone I'm forgetting!) Solid-to-amazing work all around. Given how often so-called professional engineers screw up when faced with recording an a cappella CD, you'd think that most albums recorded and mixed by an engineering novice on a shoestring budget and ghetto-fabulous equipment would sound, well, more like the latest release from Lehigh's Melismatics.

Ryan Hansen, billed as the group's "technical director", recorded, mixed, and mastered Just What You Need. I salute his dedication, but he's managed to commit every engineering error in the book. Backing vocals are single-tracked, leading to a thin sound, and the group sounds much smaller than its 14 members. Solos sometimes stick so far out as to be headache-inducing and are sometimes almost inaudible. Percussion lacks depth, and bass lacks presence and warmth. The whole affair is so hideously overcompressed that, in places, the vocals audibly drop off about 7 or 8 dB with every drum hit, only to come roaring back to their original levels the millisecond the hit trails off. Mixes are cluttered and busy. Preamps are too often overloaded. (Actually, once would be too often.) Grooves lurch about as though no click track had been employed.

As for the Melismatics themselves, they're your everyday mediocre college a cappella group, unexceptional in every way. Solos are generally passable. Energy is basically high, albeit in a glib, cheesy way. Tuning is fine one minute, unrecognizable as music the next. Arrangements range from adequate to atrocious. Vocal percussion is terrible; percussionist Andy Rosenbloom needs to learn that there's a difference between putting together a beat and simply cramming as many cool sounds into each measure as will fit. A great deal more economy and restraint are needed to tame his cluttered grooves.

Biggest missed opportunity: Derek Wilson turns in a beautiful solo on Superstition. Unfortunately, the arrangement is a travesty, overflowing with exaggeratedly nasal "wow"s and other "look what weird sounds we can make with just our mouths!" syllables. Also, you can barely hear Wilson through a thicket of hopelessly out-of-tune backing vocals that are mixed way too high.

Faint praise, unfortunately the best I can do: The arrangement of Are You Happy Now? is infinitely superior to the Loreleis' inexplicably CARA-nominated chart. And the album art is kind of cool in a whimsical, low-budget way. There aren't really any highlights or lowlights; the tracks I gave 2's are somewhat better than the tracks I gave 1's.

Again, I'm thrilled to pieces that the Melismatics decided to go the DIY route. But they, and Hansen, have a great deal to learn. Just What You Need is anything but.

Just What You Need can be ordered through the group's web site.