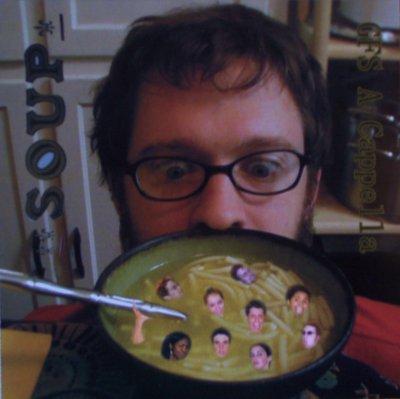 A lot of really good stuff on this vivid album from Germantown Friends School, trailblazers of high school a cappella. The three best songs can keep up with the top tier collegiate scene, another handful are darn decent and the remainder are nothing to be ashamed of. This new album gets off to a slow start but builds up and on from 2003's excellent 440.

On to the songs. The GFS gang has sensibly abandoned its three-group format for one big happy ensemble. The new disk loses nothing by giving up the variety of all-male, all-female and coed voicings. And the combined output sounds together and energized on pretty much every song. Tuning is imperfect but usually acceptable. On the songs that slip, charisma usually saves the day.

Here With Me is the best song, sung by the stunning Claire Fuller. Du Hast is the other showstopper, its loud Europop making a terrific impression. It's not just a novelty tune, either — most college groups can only dream of delivering a dance tune with this much drive. Possession, ably led by Sara McCarty finishes off the first tranche. In the second tier, Fuller reappears and elevates Vogue, while 1979, Fake Plastic Trees and even With or Without You all have their strengths. Wake Up is another successful loud song; I'd put it on par with the rank and file tracks on Off the Beat's latest.

I love the variety on this disk, from '80s chestnuts to the more adventurous loud numbers. Thriller is less than thrilling and the production ranges from the polished of Here With Me to the, ahem, unadorned Every Breath You Take. The Police get a pretty dull arrangement — reminds me of the schlock I was turning out in the early 1990s — but I have to say the cheeky baritone hook made me smile every time through. Another You also deserves a mention — it's a darn good attempt at channeling the Real Group, and soloist Kristin Young has a deft touch with its sky-high stylings. There's a lot of musical theater buttkicking in her future, if she wants it.

This album is fresh, joyful and often pretty darn good. Its singers sound inspired and full of promise, which hopefully will rub off on listeners too.

Combining mostly monotonous arrangements (think "doos", "doos", and more "doos" — with an "ah" if you're lucky) with unseasoned high schoolers' voices could be a recipe for disaster. But GFS fares a bit better than on their last yearbook album in producing a fairly mediocre album by collegiate standards, and a decent one by high school ones. The new director of GFS A Cappella, Allan Drew, seems unsure of where he wants to take these kids. His contributions to the tracklist include a Rage Against the Machine song, an all-girls version of Smashing Pumpkins and Radiohead, and an awful Weezer cover. The predominance of pop on this album belies the fact that these kids are at their best singing jazz like Another You or Calling You, where their school choir vibratos and blend work for them rather than against them. Soup is a more consistent album, but consistent mediocrity is not something to shoot for.

Soup is an unfortunately appropriate descriptor for the mix - nearly every track is drowned in reverb, burying the solo and background singers. This only accentuates the groups' difficulties in attaining rhythmic unisons, but probably helps hide some of the most offensive pitch problems (often found in the soprano lines). Despite the continued overenunciation and classical tones, the girls of GFS fare far better than their male counterparts, whose solos were uniformly weak. Though they sound understandably young here, Jackie Arrington and Sara McCarty are undoubtedly taking some college groups by storm right now, whereas Kristin Young's chops will serve her well the classical arena. And Jessica Hershberg deserves credit for taking me from incredulous laughter at a soprano version of Billy Corgan to grudging appreciation for a very different take on 1979. The all-girls tracks are as strong as much of the collegiate female work out there, but they suffer from many of the genre's limitations (lack of range, energy, edge, etc.).

As always, I find it hard to rate high school albums when the age of the group members (and their voices) puts them at an inherent disadvantage. But having heard other work out there, it's clear that the high school world has more to offer than this. My guess is that GFS A Cappella does as well, and would be well served to look more broadly for inspiration the next time around.

The good on this disc is simply fantastic. A trio of songs toward the beginning of the album, Another You, Wake Up, and Here With Me are some of the better tracks I've heard this year. Another You features a soloist with almost inhuman vocal control, making the fact that she is only in high school that much more impressive. This track also has great inner voicing and a complex yet expertly executed bass line. Here With Me managed to impress me despite the aversion I have to the original. With another incredible soloist, well nuanced emotion from the backing, and incredible use of dynamics (not to mention stellar tuning), I found it a compelling listen. However the best track is Rage Against The Machine's Wake Up. Good arranging and phenomenal tuning create a solid backdrop. With a chilling soloist and non-stop energy and punch from the basses and baritones there is little not to like about this track.

Unfortunately most of the other tracks do not live up to these gems. Engineering tends to be more amateurish, especially on the final track where the soloist is clearly overblowing the mic. Arrangements also don't measure up: Every Breath is a rehash of countless other covers, whereas With or Without You is too busy with inner voices to the point of distraction. Other soloists range from barely palatable to slightly better than average, but can't measure up to the above-mentioned triumvirate. With the exception of 1979 — with laudable originality — solos mimic the original as closely as possible. Tuning comes and goes, but is generally decent throughout.

Overall, the effect is much what you would expect from a high school album — performers of widely varied abilities creating a widely varying product. For such a young group, both in terms of age and experience, it is a solid starting point. The better tracks might be worth the price of admission, but the inconsistency makes it worthwhile only when listened to selectively.