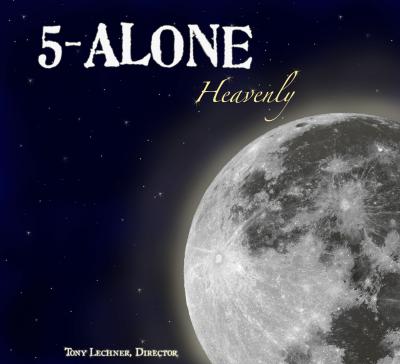 Mixed high school jazz ensemble 5-Alone's music is more challenging than most college groups dare to attempt. 5-Alone's non-enhanced intonation is exceptional. Director Tony Lechner's programming choices are a delightful mix of classics and those that will be. And 5-Alone's soloists are often talented beyond their years. The result is Heavenly a fun, creative, and endearing album sure to please current fans and convert new ones.

The noticeable difference between this talented ensemble and some that have been around the block a few more times, the same difference that keeps the scores from all fives, is consistently dynamic phrasing. With few exceptions, (Ridin' The Rails, I'm With You, Can't Stop Thinking 'Bout You) the listener is aware of the talented singers' youth. The divine ebb and flow, the breathless elasticity that made the original tunes immortal is a tough act to follow, emulate or improve on. But this comparison is the razor's edge of RARB: reviewers are charged with comparing 5-Alone, not with other high school groups, but with all recorded a cappella, including the Take-6s. Hardly a fair contest, but certainly an exceptional showing.

These singers are graduating with solid blend, exceptional intonation and a repertoire that couldn't be more rare at this level. It's a monumental achievement. But in a perfect world, the next level is respecting every note, phrasing, micro-phrasing, nano-phrasing until each line takes on its own life in service of the song and arrangement. If ever an ensemble was up to the daunting challenge, it's this one.

There are great soloists, and there are mediocre soloists. There are great songs, and there are mediocre songs. 5-Alone's latest, Heavenly, is a tit-for-tat selection, inconsistent in its song selection and execution, and not as praiseworthy as its Pick of '04 predecessor Good Vibrations. An interesting combination of sweet vocal jazz (Thousand Things, I'm With You), doo-wop (Heavenly; God Only Knows), and cinematic soundscapes (In The Waiting Line), the achievement of the group tackling each genre successfully is rather spotty.

Beginning with Thousand Things, the kids — high schoolers, no less — match themselves well against professional jazz singers, and execute an energetic performance close to the Real Group's original track. I was thrilled with the scat singing, and while soloist Cari Stanford is slightly pitchy, the piece leaves the listener with baited breath, eagerly anticipating the next track ... only to be disappointed by the sedate, boring Heavenly. While the background vocals are fine (save for the distracting "boop-de-boodely-boodely"s), they seem overly concerned with singing on key and thus take away some of the fun that might have gone into the piece. The soloist here is utterly deadpan.

Which brings us back to one of the highlights of the disc, David & Goliath. I adored this fanciful piece with an excellent solo by Daniel Plimpton, the Justin Timberlake-like frontman. Reminiscent of last album's Get Away Jordan, David & Goliath has a lot more polish and feels a bit cleaner. The dynamic plummets yet again with Body & Soul, sung in close harmony. I don't have the best ear for this kind of thing, but it seems as though only a part of the group is singing on this track, and I feel as though some of the breath, tone, and timing issues may have been resolved with more singers or at least multiple tracking.

The best of the album comes smack in the middle in the form of Arianna Clark leading the 5-Aloners in the slick, delicious upbeat Ridin' The Rails. It's a pleasure knowing there's young talent like this out there, and I'm dying to know which lucky college group swooped down and recruited her. You can, of course, skip over God Only Knows, which for some strange reason makes use of three different soloists, as if to say "We didn't want to leave you guys out of getting a lead somewhere on the CD, so you can share this one." And to mix it up a little, One Day I'll Fly Away is also forgettable. I'm With You is a nice closer to the more traditional songs of Heavenly.

And just to prove that they're not just choir geeks, 5-Alone tosses In The Waiting Line into the mix, the languid, dreamy song you'll remember as the one Zach Braff trips out to in "Garden State." This unpretentious techno number is followed by Can't Stop Thinking 'Bout You, a modern blues number with more sophisticated background vocals and a believable lead by Trevin Bond. Heavenly closes out with a lovely harmony on Silence of Time.

It's strange to hear an album whose songs are so polarized between above-average and really, really average. You can chalk it up to youth, or perhaps to having a teacher as musical director. Either way it's still a release notable for its best tracks, even though they intrigue me to seek out the originals.

If I could reach through the CD drive on my laptop and high five these kids then that would be creepy, but well deserved.

Once again, Tony Lechner's students have stepped up to the plate as an artistic force worth reckoning with. I can hear how much fun they had in each track which made everything that much more pleasurable to listen to. Oh yeah, that and they can sing tight, five-part jazz harmonies. Interesting and varied arrangements allow each song to naturally develop without forcing anything. Although the girls have slightly more control over how they place each note, all the solos are heartfelt and rich. The only thing keeping me from giving this album a "5" is that pesky "complete body of a cappella" caveat.

Blah, blah, blah, they rock. Everything else I could say has already been said in the reviews for Good Vibrations or will be said by the other reviewers for this album so I'm going to take this opportunity to redirect this review for a second.

I hope there are more junior and senior high teachers that read this site than I think there are because they need to go get this album right now. We are taught as teachers that an extrinsic motivational quality for our students is to have them listen to good music that inspires them. There is no denying the benefits of motivating non-performance-high-school students with their own peers rather than perpetuating the status quo that this kind of music is only achievable at the college level with the plethora groups vying for fresh membership. However, this goes for you, too. You need to keep exposing yourself to new and challenging music to stay fresh and excited about sharing music with them. I understand that a lot of students might be in your chorus just because it was an elective that fit into their schedule, but even a watered down version of any of these songs could prove to be the hook that cultivates new singers and refines the current crop. Or maybe just having a few albums like this one hanging around your library could inspire a few students to start a group of their own! Self motivation, what a concept.

Bottom line; You're missing out if you don't have this album or see 5-Alone live and if you're an educator, then you are doing your students a disservice if they don't have access to this album.

To order this album visit A-Cappella.com.