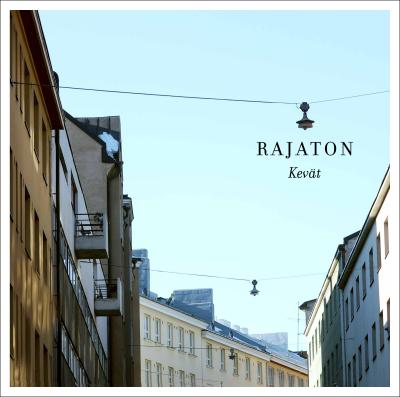 I make no secret about my affinity for the Finnish sextet Rajaton and I have enjoyed their last three CDs (and reviewed them accordingly), despite each successive release having been less accessible to me than its predecessor.

I have to admit that with their latest CD, Kevat, they are trying my patience a little.

It's not that the album isn't good — it's lovely, and up to the highest standards of composition, performance, intonation, blend and feel that are now expected from this talented ensemble.

But there's truly not a bone to be found for us non-Finnish speakers and that's very troubling. On Boundless (their 2nd CD but the first reviewed by RARB), the majority of the repertoire was in English, with stellar results. They followed that with Sanat, and album of sacred Finnish music, which managed to be equally compelling thanks in great measure to informative liner notes that provided line-by-line translations. Next up was Joulu, a 2-CD set of mostly Finnish Christmas music that dispensed with the translated liner notes making it entertaining, but a difficult listen for a non-Finnish ear, save for a few jazzy English standards thrown in. Understand that Joulu was a smash hit for Rajaton in Finland where it went platinum and reached #2 on the charts, but as I said at the time, it may indeed be one of the best albums you needn't buy.

Now comes Kevat, meaning "Spring", and featuring exclusively original songs written in Finnish specifically for Rajaton by some of Finland's top songwriters. Once again, however, the group has chosen to dispense with translated liner notes, so now, the non-Finnish speakers like me have nothing to go on. Yes, I know many of us can listen to French chansons or Spanish madrigals or Schubert lieder without understanding any or all of the words, and indeed, Kevat's pop sensibility makes it quite listenable, but listenable does not equal truly enjoyable and in having to make that distinction, I was disappointed.

Nevertheless, from a technical point of view, the album is nearly flawless, showcasing a diverse range of musical styles and featuring some fantastic singing and arrangements. Their website suggests that a few of the tracks from this CD will be included on an English-language album scheduled for release later this year and perhaps that will be the one that restores my previously unbounded enthusiasm for this terrific group.

Rajaton's Kevat places me in a quandary unlike any other album I've been charged with reviewing, despite having reviewed the group's Sanat. Where Sanat mixed Finnish compositions with songs familiar to chamber singers, Kevat is, for me, unique among a cappella music.

Kevat shows Rajaton moving firmly into the pop genre. Some songs have the easy listening groove of a cool Euro lounge (Lunta) while others show influences from rock (Sydän ei vastaa, Nälkäiset linnut), salsa (Kertosäkeen nainen), and even reggae (Venelaulu).

Many songs are individually indescribable. Älä mene pois, for example, begins with a warm, delicate alto solo and moves into a jazz-infused groove, then builds to a remarkably Madonna-like moment in the melody ("Like a Prayer"). Nälkäiset linnut has the feel of George Michael's "Careless Whisper" in the verse but shifts completely in the choruses. The verse of Jos sanot reminds me of the plucky French children's song "Alouette", but it features a gorgeously chorded chorus — and a bridge reminiscent of Queen's "Scaramouche, will you do the fandango".

This album doesn't play by the rules. Songs are not identifiably ballads or lullabyes or lovesongs, yet they are all undeniably stylish. Many begin with delicate intimacy, arc gently, and resolve quickly but smoothly. The feel of the album is calm, with small, polite accelerations of energy and easy builds so that the willing listener is urged along gently and never jolted. This is music for a reserved cocktail party.

The album is performed in familiar pop a cappella conventions, but I have real trouble relating to it. Kevat has made me realize how monotonous much of recorded a cappella has become. It's amazing to me how much I appreciate the minutest differences in the pronunciation of a key lyric between two recordings of the same song. It's astounding how much I've grown to care about the way different choices of syllables help to push the same phrase of two versions of today's top 40 hit. Denied the familiarity of language and confronted with Kevat, an album that defies convention and to which I have nothing to compare, I'm left feeling lost and unqualified to review it.

I don't speak Finnish and this seems to be my gigantic loss. I have no idea what Rajaton is wailing so intensely in the choruses of Sydän ei vastaa. The swirling energy of this song alarms me — I feel like I'm missing something crucial, that in not speaking Finnish I might in fact be missing out on a revelatory warning which could help me to live a better life. Not knowing how these words are supposed to sound when spoken, I can't appreciate how Rajaton has crafted them into song. It would be arrogant to expect a translation, but one would have helped.

I can tell you that sung Finnish sounds to my ignorant, unpracticed American ear like a cold version of Spanish. The language seems to feature many variations of "ah" sounds, most of which fall somewhere between the warmth of the Latin "ah" and the hard flatness of the English preposition "at". In fact, so much of the "ah" and "yah" sound grows tiresome later in the album as it is featured so often (Nälkäiset linnut being my "Jeez!" moment).

Rajaton's Kevat is difficult to describe. I struggled with the album, grasping for a category it would fit into. The album defied me, though it is musically excellent and listeners should feel comfortable with the instrumentations and studio work. While Rajaton's Sanat is a more comfortable introduction to the group, open-minded listeners should do well with Kevat, and I think most will find it to be an interesting cultural experience.

Rajaton, a co-ed Finnish sextet, proves they are still the premier Norwegian vocal ensemble — which is no small feat considering their growing amount of competition — with their fifth release, Kevät. This album is, simply put, everything a cappella music should be.

Their sound is incredible. Full, rich, warm, phenomenally in tune, unified, blended. Pick a term you want a vocal instructor to say about your ensemble's sound, it probably applies to Rajaton. This is aided by superb mixing. There is a digital cleanness to much of the sound, yet still layered with human warmth and emotion. Reproduction is stellar.

Interpretation is also amazing. The songs swell with feeling and emotion. Each member of the ensemble knows exactly where the song is going at each moment. Despite the fact that I can't understand the music, its rich and invested performance kept the disc interesting throughout. Nothing is ever static — these are musicians that know what they are doing.

My favorites were the two pieces I would consider some of the most folk-music like of the album: Sydän ei vastaa and the penultimate Katosimme kauneuteen. In the former I love how the singers really let loose, and also the innovative use of engineering to add a twist to the traditional. Katosimme kauneuteen is clearly the disc's best. It has a great arrangement with a slick groove and beautifully sung harmonies that seems to climax over and over.

From my first listen through many repeats, this album has consistently wowed and never gotten stale. A fine accomplishment.

To order this album visit Plastinka.