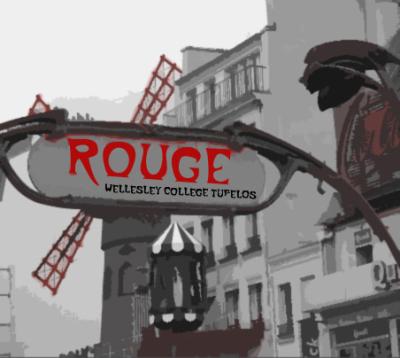 The Wesley College Tupelos don't always nail it, but they sure make a great first impression: pop rock beats and slick production backing up powerful, expressive soloists. Nothing timid. Nothing less than all the way. (Until later.) ROUGE isn't original, as a glance at the track list reveals, but it is often sexy and bold, sultry, evocative, and kickin', just not consistently so.

The production, alas, is uneven and wisely stronger toward the opening. But when they hit it, John Clark and Ed Boyer's work is exceptionally good. The Tupelos interesting arrangements are highlighted and enhanced and their busier arrangements are mixed with such a delicate hand and sensitivity to space that, at times, the production has to be credited with nudging this album's scores that extra notch up.

With few exceptions, the song selections play to the Tupelos' strengths and the programming works like a charm, frontloading the best tracks and making for smooth transitions between songs.

In the end though, it is the leads that are the great strength of the Tupelos. So evenly balanced are the talents of this group that it's hard to highlight one over another without suspecting that the honor is actually derived from the song selection, arrangement, or mixing. Suffice it to say, these leads can hold their own with any collegiate recording out there.

My most damning critique of the album is directed at the artwork (or possibly the printing; it's hard to tell where things went wrong). I can only hope that no one has to make their purchasing decision based on the low grade PhotoShopping of ... is that a windmill? And an elevator with a circus tent for a top? And a sign being held by a gargoyle? Is this an attempt at evoking the romanticized notions of old European whorehouses? Whatever it is, me no likey. Me also no likey this all-too-familiar sight on collegiate CDs: the faded greyscale headshots. And finally, me no likey the lack of credit given to the composers, lyricists, publishers and original artists, without whom this group wouldn't have any material. Ahem.

When the Tupelos are on, they are fantastic. When they miss, they're still pretty good. Fans of women's a cappella will find much to enjoy on ROUGE and the best tracks are sure to get played for years.

Sometimes collegiate groups will seemingly spring up out of nowhere, even if they have a history older than most of today's stars. Such is the case for me with the Wellesley College Tupelos. Why haven't I heard of these talented ladies before? The group has been in existence since 1949. Considering how great their new album is (and the other tracks that I've listened to on their website), they should be at the pinnacle of collegiate a cappella's queendom.

Their latest album ROUGE is a complete pleasure. They have possibly produced the most perfectly-paired recording of soloist to song that I've heard in years. No, not all of the singers are perfect, but each soloist's voice conveys an emotional conviction to the meaning of the song. You feel the whimsy, the longing, the lust and the anger permeating through each lyrical phrase.

Even the background voices are rich in texture and nuance. Producers Ed Boyer and John Clark have grasped the subtlety needed to create a solid wall of sound that sounds both current and natural. These are women singing, and even with the use of an octaver, it's a very natural sound. Captivating and brilliant.

The arrangements have a lot to do with the success of most of the album. Meg Tirrell and Jacquie Stone steer clear of the traps that often befall female groups — too ambitious vocal palettes resulting in guttural, forced-sounding alto lines and screechingly over-exposed sopranos. These two know how to reign in runaway voices with finely crafted arrangements like There Is No Arizona, In the Waiting Line Walk On and Let It Rain. The best part is that they aren't alone. Three other women share their arranging talents on the recording and do a commendable job at keeping everything to a high standard. The only laughable part is the unfortunate syllable choice that Kerry Wagner decided to use on Don't Speak. It doesn't translate well, so you'll just have to find out for yourself by buying the album.

The major problem that I have with the album is the fact that everything is cast into a nice mid-tempo range. Songs are either moderately fast or slow with nothing reaching for either extreme. The lack of diversity would normally make for a truly boring experience for this reviewer, but I'm so smitten with the sound of this group and my "new discovery" that I can't find too much fault with them. I mean, the Tupelos actually made me tolerate Accidentally in Love, a song I normally loathe.

To make this an educational review, I have two things to offer. Please fix the liner notes. There is no acknowledgement of the drummers, the original artist credits or how to contact the group (though I'm sure that Ed and John were thankful for the website plug). Plus the fact that the jacket looks like it was run on an inkjet printer and copied at FedExKinko's doesn't help the overall professionalism of the album. Also, I advise the drummers to keep working. Usually they are all are spot-on (is there more than one?), but there are occasions where the beat is a little belabored and plodding — especially Demons and Don't Speak.

I cannot wait for their next album.

The Wellesley Tupelos have been around since 1949, yet ROUGE is the first album they have submitted to RARB and damn am I glad they did. When you listen to as much a cappella as a RARB reviewer typically does, it's rare to come across an album you just don't want to stop reviewing. ROUGE is such a treat.

This album pretty much has everything you might be looking for. The Tupelos have successfully handled multiple genres, from country (There Is No Arizona), to rock (Zombie), to hip hop (Always Be My Baby). Every track is excellent. Performances are spirited and musically nuanced, spot-on in pitch and rhythm, and almost always perfectly blended. These ladies can sing, and they aren't afraid to let it fly. The backing parts clearly illustrate the commitment each member has to her own part and how it fits into the whole.

Huge success comes from awesome arrangements. They are full and rich, musically intense, and never boring. Personally I thought Zombie was the best; it was full of complexity and layering of sound, and further unfolded throughout the song to develop as the song gained momentum.

Soloists never fail to please. While the ladies can take on many personalities — alternately sultry or focused lamenting or celebrating — each lead fits her song perfectly. Voices are never strained, performers are confident. Every performer owned the song. Matched with the awesome performances of the background parts it's a win-win combination.

Of course no modern album is complete without the engineers. The Tupelos have chosen a generally natural sound, with a little octavization thrown in for good measure. Reproduction is stellar and it's apparent that the album was mixed with care. For my part, I would have preferred percussion to be a bit more forward, but it's a minor complaint.

On an album with so many great tracks, how do you pick a favorite? I enjoyed Guster's Demons, though I must admit my affinity for the original. (Nice job giving a nod to the homegrown talent as well!) I was most consistently floored by Always Be My Baby, even more surprising for how much I despise the original. There's a certain sweetness and simplicity to the way the Tupelos present the song that you can't help to be engulfed by their warmness and focused groove. Following this is a powerhouse rendition of Fix You that never fails to move me despite its slow start.

Well, that's enough gushing for now. It's obvious I loved this album for its music and appreciated it for its unpretentiousness. Hats off to the Tupelos, and I look forward to getting another album soon.

For clips and to order this album, visit the group's website.