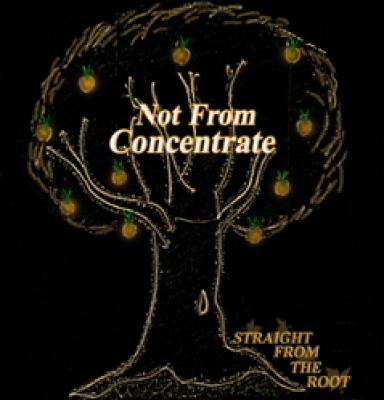 Here is a sentence I have always wanted to write about an a cappella album: the original music on this disc is superior to any of the cover tunes. Thank you Not From Concentrate! Standing applause!

Sadly, there isn't a lot more of that coming. Although I'm thrilled to see six (by my count) original tunes on an a cappella album, most of them aren't particularly songs for the ages. It's just that some of the cover performances are so terrible. Not a nice word, I know, but there's just no excuse for tuning this bad. Particularly from a group that already had a decent album under its belt.

Not From Concentrate has not lived up to its own standard on Straight From the Root. Recording in 2003 — just one year after Pulp Free — the group has apparently lost a few key members and a lot of its musicality. The tuning here ranges from barely acceptable to rehearsal tape, and not a very good rehearsal at that. And that's sad. Especially when you have a group of energetic young singers trying to make original music.

Speaking of originals, Space & Time is pretty good in concept and performance — too bad we had to survive the rest of the album to get there. The Courtney Song is probably the next best complete package. Doo Wah and Make Up Your Mind were lightweight ideas that, had they been in tune, could have won me over. But they weren't even close.

Hopefully the Not From Concentrate guys have moved on to bigger and better things by now, so this review won't mean much in the grand scheme. I hate to be such a downer, but the group set itself a pretty high standard with Pulp Free. I went back and had another listen, to see if it was as cute as I remembered, and it was. Tuning was just enough better to be passable, and Pretty Boy was still excellent. Let's hope that's the standard Not From Concentrate is remembered for, and not the leftovers on Straight From The Root.

I really hate to say it. I say it with reluctance and regret, and with my head tilted downward in an expression of apologetic sympathy: Straight From The Root is worse than Pulp Free.

Where Pulp Free was an oddball summer fling for some high school buddies between semesters, Straight From The Root feels like a forced endeavor put together on short time. The album suffers from fundamentally weak singing and lack of attention to musical basics.

Not From Concentrate has moved from a fuller collegiate, large-group sound to the vocal band format of bass, vp, solo, and harmonies. This change has prompted the adoption of beefy eq for the bass line and vp. The shift to band-dom has also led the group to take an admirable second step into songwriting, with six of twelve songs originals compared to one on Pulp Free. Despite the increase in sonic range from separately eq'ed bass and vp, the group's sonic downsizing and amateur songwriting has left songs feeling sparse and full of holes.

The singing sounds much to me like studio re-hashed DAT recordings of live, outdoor performances, but without the extra energy. Mainly, the singing is very inaccurate, and I get the impression that Straight From The Root is pretty much how Not From Concentrate would sound from a distance on a town festival's outdoor sidestage.

Solos are sometimes muffled or distant, with flat middle-American pronunciations and slushy enunciation. Louder solo lines are toneless and shouty while quieter moments lack expression. Most soloists seem to disregard style in their deliveries, preferring to concentrate on shelving notes above pitch or letting them slide under; the entire album features "cringe-worthy", live sound intonation in solos, higher background voices, and even the bass line.

The bass and vp tracks are delivered awkwardly without fidelity to the tempo or phrasing. Their warm eq makes every misplaced note, late attack, and stiff cutoff even more dramatic. The vocal percussion lines are unnecessarily complex, as if to impress a live audience, yet unrefined in their drum sounds.

Straight From The Root sounds like the hasty recording of a group that spent the summer gigging at small town, outdoor festivals instead of grinding out a quality album in a studio. The group has clearly matured since Pulp Free, substituting songwriting for sophomoric humor, but in comparison, Pulp Free is a better album musically. On Pulp Free, soloists sang with some style and decent technique while background vocals blended tone and matched pitches most of the time. The bass and vp were not eq'ed, but the group's arrangements had more range and complexity and less of the directionless repetition of fledgling songwriters.

I respect Not From Concentrate for experimenting with the vocal band format and for developing their own repertoire, but I urge the group to work on their musical basics and then employ the studio to its full capability. Most importantly, get better at the fundamental acts of singing: expressing an emotional experience while pushing air from your lungs and out your mouth. Record yourselves — even if it's on a used, lo-fi tape deck — to learn about your tendencies. Get an experienced musician to provide in-studio feedback on entrances, cutoffs, and blend. Use pitch correction devices. Spend the tedious time it will require to line up percussion and bass with the tempo. Pan and compress tracks to expand and sweeten your sound. Stepping back from Pulp Free and Straight From The Root, I have to remind myself that Not From Concentrate is a young group, both in years and in experience, and that young groups often learn fastest.

I found little positive about Not From Concentrate's first album, Pulp Free. This is understandable: first tries are usually full of mistakes. More frustrating is their second release, Straight From the Root, especially as it repeats all the mistakes of their debut, offers little improvement, and completely ignores advice given in Pulp Free's review.

This album is just plain bad. Arrangements remain almost insultingly simple, repetitive, and boring. There is no nuance, no excitement, no heart. When you start with such poor arrangements, you are doomed from the start.

Yet Not From Concentrate manages to capitalize on mediocrity by singing virtually the entire album out of tune. Tuning issues range from iffy (Fast Car) to obscene (Make Up Your Mind). Nothing locks. Tempo is inconsistent, blend is atrocious, and rhythm is all over the place. Cutoffs are never together. Soloists are average at best, and often sound uncomfortable both in regards to performance and the ability to hit the notes. There are several moments where soloists switch ridiculously from chest voice to falsetto and back, disjointing further. The tracks compete fiercely with each other for honor of the album's worst, though Two Trains won it out for me. Strident, out of tune, poorly mixed. If offers nothing positive.

Not From Concentrate is aiming for a natural, unaffected sound. Unfortunately, they just don't sound good enough to pull it off. Production is spotty. Sometimes the bass overpowers, other times the top parts drown out the soloist. Soloists are rarely loud enough. Percussion sounds amateurish and spotty in regards to temp and consistency. The above-mentioned tuning issues are not helped at all in the post-production phase.

I have to give some props to group's attempts at originals, which number half the album's tracks. But such poor performances make it difficult to judge the originals' merits. Make Up Your Mind just plain sounds awful because of spotty tuning and while the groove starts out decently on The Courtney Song, I have no idea what the song is about since the top parts drown out everything else in the song including the lead. The album's two best originals are Money Tree and Space & Time, each achieving a modest amount of interesting portions mixed with performances I could stand to listen to.

Unfortunately, I find very little salvageable in Straight From The Root. The NFC Boyz, as they refer to themselves, need to make some serious changes or relegate themselves to the bottom rung of modern a cappella in perpetuity. As it stands, there's no reason to purchase, or even listen to, this CD.