Out of the Dawg House 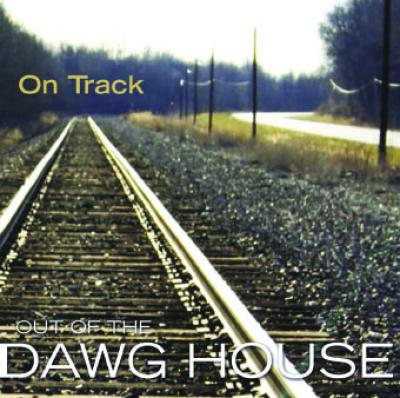 Out of the Dawg House, Butler University's all-male group, is a mere three years old; their album On Track is their first entree into the a cappella recording sphere. Once in a blue moon, some rookie comes up to the plate and hits it out of the park. But seasoned RARB readers will pick up those warning signs to leave the game early, and they would have made the right call.

The majority of On Track is a litany of a cappella no-nos: inconsistent and sloppy tuning, listless arrangements, typically weak soloists, and worst of all, a big lapse in hidden track judgment. Now I'm all for giving newbies a pass on a few mistakes here and there. But putting a hidden track on the album that is a live version of Insomniac, already on their studio tracklist? Unforgivable, especially when said live track has the exact same tuning missteps and warbly solo we suffered through half an album earlier. Seriously, guys. If it weren't for the excruciatingly long and self-aggrandizing stage banter, the tracks would be virtually indistinguishable.

The album does start with a few passable if uninteresting tracks before veering off into eyes-glazing-over territory, initiated by the ominously minor chords of Fields of Gold. While the quality of the background singing was typically alright (though often inconsistent), the timid, vibrato-saturated solo performances dragged most songs under. With so many definitive performances of these songs already recorded, just singing the notes doesn't cut it.

Out of the Dawg House typically acquit themselves best when singing a simple, "traditional" tune like Good Old A Cappella, where there is a lot less to get wrong. That's not a target I'd want my group to adopt, and I'd suggest the dawgs work harder if they don't want to be defined by it.

Many people reading this review can likely relate. You are a new group. You can sing pretty well. Your smallish liberal arts college loves you. Girls swoon. Guys want to be you. Maybe some guys swoon too. You really aren't bad. You get all excited and get together the cheddar to make your debut album. You make it, listen to it, love it. Your friends all say, "Wow, Tom, that's an awesome album. Congrats." You are young and eager to learn, so you submit to RARB. Plus, my album was good, right?

Unfortunately, On Track isn't. I commend these boys from Butler University for founding an a cappella group and getting an album out the door. That is a feat in itself. But it simply isn't sufficient in the modern a cappella world.

On Track is essentially a rehash of what other people have been doing for the last twenty years, except done worse. Song choices are uninspired. Arrangements were all done by someone else. Everything has been sung by other people, lots of times.

And while Out of the Dawg House really aren't bad, they aren't great either. Their lack of innovation is compounded by their mediocre delivery. Clearly there is some singing talent. In particular, I found many of the solos well done. But pitch has a tendency to wander, tuning and blend aren't spot on, and vocal percussion is average at best. The group is its best singing in choral-style block: Fields of Gold is a good example. Another of their better tracks is Insomniac, with some interesting parts and clearly energetic performances. But it's also telling that the disc contains both a studio and a live version of Insomniac, and it's difficult to tell the difference between them. There is little studio polishing, and if OOTDH were military shoes, they would fail inspection.

Sidebar: I always feel a need to comment when a group doesn't put the songs' original artists in the liner notes. I find it unprofessional and disrespectful. How professional an album cover containing a picture of your group with its pants down is, I suppose that can be up for debate.

So what we're left with is like a box of Triscuits you have left open all night. Not bad, but stale. For Butler, I guess old Triscuits are better than no crackers at all. But for the rest of us, stick with something fresh.

On Track is such a parody of itself that it may as well be called "In the Still of the Night (in Africa), MLK and the Insomniac Walked in Memphis Through Fields of Gold". Granted, Indianapolis is a far shot from the a cappella Mecca of Bloomington, but these guys should know better. This weak offering suffers from bad syllables, speed singing (with the exceptions of Fields of Gold and Walking in Memphis, which both run about 10 bpm too slow), awkward soloists, and of course, a track listing far below expectations.

To be fair, it's not a bad recording, but all things considered, this is one boring album, even if most of the founding members appear here on what I'll assume is the first release for "Out of the Dawg House". Block chords pervade most of the songs, with occasional layering to produce texture, but for the most part the album is a lot of "oooh"s and "aaah"s (or some variation with a consonant in front).

Of course, the issue is in the arrangements, none of which come from any of the group members. Indeed, the strongest tracks are those that come straight out of the CASA library (It's So Hard to Say Goodbye to Yesterday and Good Old A Cappella), and even those are pretty standard, although I don't know what happened to the bouncy bass under the chorus on "Good Old", which makes it sound quite glee club as opposed to doo-wop. The worst offense on the album? Insomniac. Not once, mind you. Twice. First as it's listed in track 6, and then hidden just past MLK as a bonus. Kids, listening to that 9-year-old Virginia Gentlemen arrangement a second time is not a bonus. It's punishment.

The thing is, I didn't even really have to listen to the album to know it wasn't going to impress me. You've got a track listing that for the most part would have been outdated 10 years ago, and the only thing On Track has going for it is a decent studio blend. Other than that, this album could be lost in the a cappella archives for eternity without being missed by anyone but the Dawg House themselves.