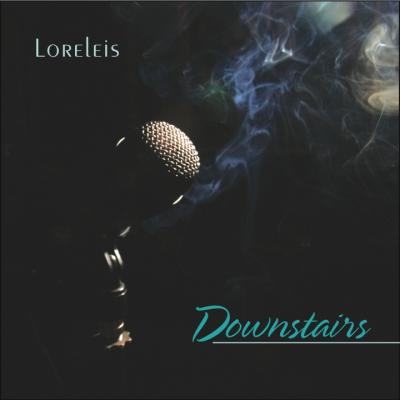 Where Take a Big Whiff went so terribly awry, Downstairs goes so delightfully right. In just two short years, the Loreleis have blossomed into artists to be reckoned with. Chock full of pop with a slight country seasoning, this album is some of the best women's collegiate a cappella you can buy.

Sure there are quantum leaps forward in arranging and intonation, but what's the real secret here? Leads, leads, delicious leads. Believable, engaging, strong, sensitive, emotive and, judging from the CD art, hot. To call them belters may accurately describe their power, but falsely implies a coarseness that these singers have left behind. These are sophisticated leads with the control and artistry to do so much more than land the notes and mimic the originals. They add their own stamp and tell their own stories. That's so much of what makes for repeat listenability.

Producer, Dave Sperandio has outdone himself on Downstairs. The attentive production is some of the best I have ever heard on a collegiate release. The balance of voices in the mix, the use of creative, tasteful effects, the seamless transitions between songs: Dio took out the big guns for this one and the Loreleis clearly gave him the berth (monetarily, artistically, etc.) he needed to get the job done right. I can't imagine too much else a group could want from their producer.

Well, maybe I can imagine a little. I suppose he could have talked them out of Waterfalls and Heartbreaker. The former starts uncomfortably and then proceeds to get downright awkward by the time the rapping starts. The latter, while more comfortable, still comes across as just beyond the Loreleis' ability to sell as genuine — an unhappy departure from the rest of the album. Despite aggressive production choices, the last three songs just don't work as well as the first eleven. Lorelei the last of the three, is an obvious choice for inclusion, but needed just a little more overhaul in arrangement and production to fit with the rest of the album stylistically. It's an OK track anyway, but pales in comparison to the rest of the CD.

For the uninitiated, just pretend the last three tracks aren't on there and buy this one. The good stuff is definitely going on "downstairs"; you'll miss out if you don't follow the Loreleis all the way down there.

In the more than eighteen months since I reviewed the UNC Loreleis' last album Take a Big Whiff, I've heard quite a bit of first-rate, all-female collegiate a cappella. I mention that because I very much enjoyed their newest album, Downstairs, yet my scores are lower than those given to Whiff. A contradiction perhaps, but the bar has been raised even in the last two years by groups like Divisi (University of Oregon) and Random Voices (UCLA), so the "4"s and "5"s should rightfully be harder to come by.

Once again, the Loreleis have fashioned an album of music by women and once again, the variation is commendable. From the folksiness of Dolly Parton to the attitude of Avril Lavigne to the plaintive simplicity of Sarah McLachlan to the take-no-prisoners rocking of Muse to the almost nostalgic early hipness of TLC, these ladies haven't met a musical style they aren't willing to tackle with wonderful energy and confidence.

Once again, the solos are spread around the group and unlike Whiff, the album doesn't suffer for its egalitarianism. There is an occasional tendency to allow nasal tone to substitute for attitude and edge. The whine in Heartbreaker is no match for the rawness of Pat Benatar's original and the solos in Objection and Consider This also became a bit taxing past the first two minutes or so. By contrast, Elizabeth Wright's energy on My Happy Ending had to be a big contributor to the track's inclusion on BOCA 2006, and Amanda Bolch deserves a shout-out for her versatility in ranging from beautifully sweet on Candleburn to go-for-broke on Vindicated.

Overall, Downstairs is front-loaded with its best solos, arrangements, and overall songs in the first four tracks. The aforementioned My Happy Ending is a perfect mix of a layered arrangement, VP that enhances without dominating or overwhelming, a killer solo, and expert production by Dave Sperandio. CARA nominations should rightfully reflect this early next year. Jolene is by no means a terribly interesting song, but the solo is lovely and the variation in the arrangement in the second verse ensures that it never gets boring. The solo on Somebody to Love just falls a bit short of the passionate edge that would really make the track sizzle, but it's a wonderful example of how an arrangement can work on its own musical terms first and then utilize VP to make it that much more effective. And Candleburn is just really, really pretty — if the complexity of the kick drum rhythm draws a bit too much attention to itself, that's certainly forgivable on what otherwise is beautiful work.

The rest of the album, however, can't quite rise to the level of these opening tracks. There are by no means any clunkers, and indeed, even the lesser-quality tracks make for a good listen, especially if you're a fan of the originals. But whereas the first few tracks showcase nicely textured arrangements, the later tracks are often one-faceted, with opening grooves that never develop beyond their first statement (Waterfalls most notably) or "ooh-ah"-based choral arrangements that get louder (Stronger, Stupid) without getting any more interesting or compelling. To some extent, the contrast between the opening tracks and the rest of the album only serves to re-affirm the obvious: how singularly important a well conceived arrangement is as the backbone of any top-notch track — ballsy solos, intricate VP, and crafty engineering are just leaves on the tree that can't survive its uninspired roots.

In all, Downstairs is solid work and it certainly keeps the Loreleis in the upper echelon of all-female collegiate ensembles. But they definitely should be looking over their shoulders because it looks like they're going to have to do even better work to stay there.

Something supernatural must have happened in the 275-mile drive between Clemson, South Carolina and Chapel Hill, North Carolina over the last year, transforming the Carolinas into the a cappella Bermuda Triangle of the south. I don't know who or how — though I have a pretty good guess — but the Loreleis' Downstairs is the second fantastic women's album I've had the pleasure of reviewing over the last year. This album punches with pizzazz and gives new meaning to edgy.

It's a smart compilation full of femme fatale superstar originals ranging from Shakira to Pat Benetar, Sarah McLachlan to Faith Hill, and even Dolly Parton. And yet there's no passivity; even through the slow, mellow Candleburn and woeful, regretful Stupid, the album is fully engaging with stunning, soaring soloists and clever, inventive arrangements. Though I find Vindicated to be slightly on the whiny side and the breaks in between verses of Consider This a little weak, they're still clean, thoughtful performances that bode well against the overall vocal texture of the album.

The album resonates with me in particular because it's a focused, steady effort that shows off the multitalented Loreleis for who they are, as opposed to their previous release Take a Big Whiff which ultimately disappointed me after hearing about their stellar reputation. The Loreleis have now acquired a musical finesse and sass that explodes in their music: Jolene is not merely a country song, Objection attacks the difficulty of a cappella tango with style and conviction, and Somebody to Love (Jefferson Starship — not Queen — thank goodness) is both pop and classic rock developed into a very solid all-vocal execution. Together with TakeNote's Now That We Have Your Attention, Downstairs rescues the genre of all-women's a cappella from its downfall.