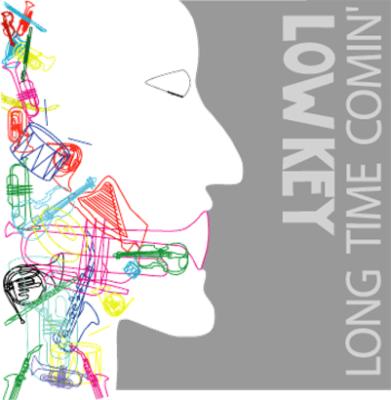 Long Time Comin' may have felt long overdue for JMU Low Key, a young mixed collegiate group of only six years. But this debut album meets just about every stereotype within the young group/first album genre, leaving the rest of us content to wait a little longer.

Like many mediocre albums, there is a tendency here to pull songs from their particular speeds and moods to a mid-tempo purgatory of sound, with mixed results. On one hand, you have the shimmering choruses of the boppy Strong Enough, almost pretty enough to compensate for the lack of pathos from the soloist. On the other, you have This Love. Essentially a funeral dirge with a pop beat, the arrangement's held chords (not entirely correct ones) drown out of any of the original's infectious energy.

One glorious exception — replacing Frou Frou's melancholy with the soaring, pulsing ride of BOCA-selected Let Go works brilliantly when executed with such shiny, slick panache. The track also has a clarity of sound that I found missing from most of the album, which felt muffled at times. The inconsistency in production and tuning across the tracklist is so jarring that I'm left with only one explanation — Low Key ran out of money while mixing. How else to explain the exuberant (if heavily distorted) Spiderwebs alongside the sullen Galileo and whiny Creep? James Gammon is working with some fairly average solo performances and doh-bah arranging here, but his past achievements suggest he's more than up for the task of spinning straw into gold. Yet it's hard to believe he would have been satisfied with such a patchy end product. And thus my theory that 75% of the mixing budget went into 25% of the album.

One specific piece of advice: a number of singers here have the annoying habit of re-enunciating held vowels, as in "You and I both lo-ho-hove", "I think I'll write a boo-hoook", "I will never see the light, oh the li-hi-hight". Yes, sometimes that can be an effective stylistic choice. No, it is not in fact effective in any of these instances.

Low Key has a rather adorable website that enthuses "Now that we know creating a CD can, in fact, be done, we will begin our next album this Fall of '06." Well said — Low Key's next hurdle will be striving toward excellence rather than mere existence.

Long Time Comin' is a respectable first album, from a group that just sounds too hesitant and polite to really kick it.

The females are wearing the pants in Low Key. There's a definite lack of male oomph in the inner mix. Where are the tenors in this operation? Too often we only readily hear women, a subtle thick bass, and the soloist. The rest is compressed into general warmth. I have a hard time sitting still to this style with mixed groups. I want to hear it all. And I want to hear stronger intonation, more distinctive background lines, and more risk taking.

But I can't scold Long Time Comin' too much when James Gammon and Low Key fashioned the masterpiece Let Go. Frou Frou remains a hit in the aca scene, and I'm confident the Low Key interpretation is the best anyone could dream up. Apparently I'm not alone in my opinion, as Let Go was chosen for BOCA 2006. Creep had a lot of potential but was paired with a shaky soloist. I was wondering how he'd handle the intensely high part when the baton was suddenly handed off to a female in the group. Well, that's one way. I liked her style better and think she should have sung the entire song. Back to the praise, The Zephyr Song is an instant mood booster. And I love the special touches, clarity, and wonderful dynamics in Strong Enough. Each time I listen to it, I hear another little gem.

Bits and pieces were awesome, but on the whole, Low Key has a few more miles to drive. Here's to more Let Gos and Strong Enoughs.

It's hard for me to get fully on board with the JMU Low Keys' Long Time Comin'. My concern is a complete lack of consistency between and within the songs of this album.

On one hand, there are moments that make me start bobbing my head and tapping my toes; the driving and bouncy lead in Center of Attention, the highly produced percussion in Let Go that skillfully supports the vocals, the passionate yet lethargic lead in the same song, and the energetic frustration that the lead in Spiderwebs portrays. On the other hand, there are moments that make me cringe a little and wonder, "Why?". Why were songs like Let Go and Spiderwebs given so much studio attention when songs like Creep and Dust on the Bottle have such blatant issues with intonation? Why was the percussion treated so differently in each track to the point of distraction? Why wasn't the quality of each track spread around a little more so that it doesn't sound like a different group is singing each song?

I have a feeling that it happened to work out that most of the group's favorite songs are sung by girls, which is why it seems that they are carrying most of the weight on the album. It's unfortunate, because I suspect that if more of these guys were singing songs more comfortably in their range, or weren't trying to mimic the poor technique of the original artist, then the overall product would be much better, and more importantly, more consistent across the board. I would be a greater fan of Long Time Comin' if it sounded less like the Low Keys were trying to sound like everyone else and more like they were stamping their unique sound and style on everyone else's music.