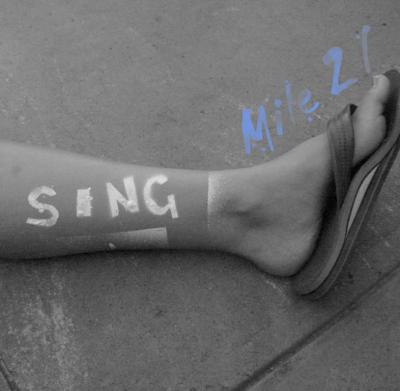 The album name that Mile 21 chose for its first album reveals much. Sing is simple, unadorned singing. Mile 21 has a stripped down sound that demonstrates an understanding of the musical basics of a cappella singing, but it's time for this group to enjoy the advances pioneered by the rest of collegiate a cappella.

Mile 21 seems musically competent, with a tendency to stay in key and on tempo. The group has a grasp of variation, making verses sonically different from choruses, attempting tepid swells in volume, and building some contour into each song. I'd go out on a limb and say that soloists understand the need for intensity.

Yet Mile 21 does not exploit these techniques that make a cappella so much more than the sum of its parts. Sing doesn't meet the high standard's of today's a cappella. Instead, Sing feels like the typical a cappella of the mid to late ‘90s: the songs sound like covers rather than something new, the soloists are typecast, the arrangements feel a little transcribed. It feels almost as if the group didn't trust itself to make crescendos big, to depart from the original song, to pour their hearts into it — you know, to get excited about singing.

Most striking about Sing is that it feels amateurish. The group is imprecise with a few entrances and cutoffs, with a few noticeable differences between the male and female contributions to a chord (Virtual Insanity). Multi-tracked sections have a soft syncing of rhythms instead of the squeaky clean lines I've grown used to. The studio only mildly eq'ed bass and vocal percussion lines, leaving the group's tonal range feeling shallow compared to today's octave-spanning approach to vocal rock and pop. The basses sound like baritones struggling unconvincingly to pull double duty (I Wish, Killing Me Softly). Instead of providing a deep foundation and thumpy rhythm line, these guys sit in the middle range, blending like guys who couldn't hit their notes an octave down (bottom notes of Flake). Other solo and background vocals go naked in spots that effects would have strengthened (Toxic). The group's tempo wavers, usually accelerating to a rushed tempo (They, Toxic).

Typical of recordings from the mid and late ‘90s, Mile 21 has difficulty blending. First, the group's arrangers don't range far from a cappella's building block syllables, so the ear can more easily pick out tonal differences amongst voices on the same line. For example, imagine casually mouthing the instrumental line to Flake while running an errand in your car and those are exactly the syllables Mile 21 chose to commit to this studio album. Second, the arrangers don't thicken up individual voice lines with doubling, so voices feel exposed and some lines are left thin. I think I could meet members of this group and pick out their lines just from hearing their speaking voices. Third, small inaccuracies in entrances/cutoffs and pitch aggregate slowly into a veneer of roughness (Down to the River, Long and Winding Road).

For such a young group — Mile 21 was in just its second year while recording Sing — there are signs of promise. Mile 21's understanding of the basics is something that used to take groups many more years. I encourage the group to listen to the top groups in the country to inspire ideas for arranging tricks and syllables (maybe a "music appreciation" rehearsal now and again?). Definitely work to make verses differ from other verses and choruses from other choruses (some songs get repetitive). The group's soloists have good voices and sing with style. Amp up the solo energy, gang; soloists are a strength of your group. When soloists have the confidence of a supportive background and an arrangement that will build to meet their energy, a group like Mile 21 can really learn to sing.

Is it the air? The water? The altitude? The snow? Whatever they have going on in Colorado I want to know. This is the second debut album I have reviewed from a Colorado group this year, and both debuts have been far above the average quality of debut material I typically see.

Mile 21 is a co-ed group from the University of Colorado that sings a variety of music but mostly with jazzy flair. They have a fundamental grasp of singing and recording and offer a solid album. The rely mostly on the strength of their voices, presenting what might be considered a remarkably organic-sounding album for the 21st century of a cappella, though it feels a little thin and compressed to me for how fully the group is singing. Tuning and articulation are fairly good. Percussion is also decent.

Despite its strengths, Mile 21 has some work to do as well. First and foremost is blend, which Mile 21 can't seem to get just right. Parts seem disjointed and independent of one another, particularly on the more modern numbers. I disagree with many balance choices. Basses seem to be out of their range at many times, and they overcome for this with a pointed sound that doesn't meld (but I did like the energy on the bass line of I Wish.) While ensemble numbers such as Long and Winding Road fare a little better blend-wise, the group still doesn't move together. Further, the group doesn't fully understand dissonance, especially how to blend into, within and out of a dissonant chord.

Some creative arranging appears, such as the sparseness of Toxic and Killing Me Softly. In a personal confession I will probably regret later, I really like the original Toxic; it's musically one of the better-written pop tracks I have heard in a long time. Mile 21's arrangement really allows the unique chords to come through — though medley-ing it with Hey Ya completely cracked the mood and ruined the tempo. Yet despite these few gems, most arrangements are monotonous and repetitive. Don't Lie is bad, but the worst is the almost mind-numbingly dull They which is only saved by a sultry performance on the lead.

Overall this is a solid debut, one which Mile 21 should be proud of. I look forward to more success in the future.

Who are these adorable, peppy kids, and why have I never heard of them before? I'm enthralled by the slightly sloppy yet incredibly charming collegiate ensemble Mile 21 A Cappella out of CU-Boulder. Taking a bold risk by relying on vocal execution rather than studio production, they successfully escape the perils of poor blend and boredom, mostly through the creative arrangements of music major Chris Carey and engaging soloists.

Demonstrating a strong command of musicality, Carey's arrangements range from a mellow, fluid, and jazzy Long and Winding Road to the Black-Eyed Peas' pop hit Don't Lie, all of his pieces show off what really matters most to me in collegiate a cappella: blend, skill, talent, and most importantly, the ability of the group to gel together. Unlike a lot of previous first releases I've had the unfortunate opportunity to listen to, Sing is quite a gem. I don't know about "vocal pyrotechnics" (as described in the liner notes), but the music certainly impresses. Even Virtual Insanity, of which every a cappella fan has heard at least five versions, is fresh and fun. There's a bit of repetitive overkill in the background syllables on Flake, but I'll forgive this slight because the Jack Johnson original bores me.

Beyond the arrangements, the lead vocalists are rather capable, if not above-average. But the second half of the album falls just flat of the first, with a diversity of arrangers culled from the rest of the group. I'd have preferred a little more sass from lead Liz Ager and a less sparse arrangement from Graham Fuller on Toxic, and certainly without Hey Ya inserted in the middle. When Toxic returns, the tempo is raised about 10 BPM. It's a bit of a downhill slide from there, with a slower I Wish and a few more overdone (yet somehow undercooked) tracks including Clocks and Killing Me Softly. I have to add, though, that while Down to the River is one of those tracks a lot of us could live without, it is particularly compelling as a disc closer featuring the no-last-name Julia as the song's initial soloist.

But what a great entrée into the national collegiate scene! Mile 21 A Cappella has all the makings of a stand-out group based on the emerging talent from group elder Carey. A few in-house arranging workshops and perhaps some a cappella listening parties could help pull up this group from good to great. I'm pleased to hear something so nice from a group so young.