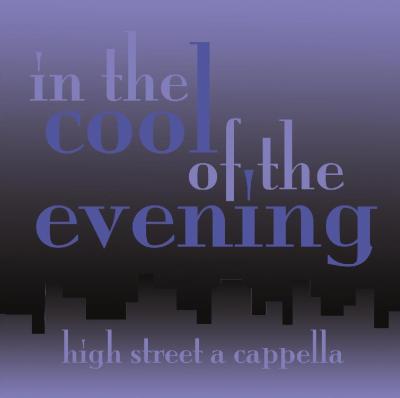 At first listen, High Street A Cappella's in the cool of the evening is refreshing in its old-fashioned way. This is the way your dad's a cappella was made. RARB doesn't review too many of the glee club style collegiate groups anymore. Have low scores born of genre-prejudice scared these groups away? It's possible. Perhaps many have simply been overtaken by groups seduced by the allure of modern technologies. But whatever the reason, RARB tends to review collegiate groups that perform mostly pop, rock and R&B. Not here. While High Street's track list seems to indicate that they cover these genres (Georgia, Late in the Evening, Thriller), that's not the case. Forget the titles; cover to cover, this is a Glee Club. Though these singers are pretty good, the recording wasn't flattering enough to make the listen a good one for this reviewer.

There is no VP, little studio trickery, no enhanced bass, no discernable autotune use at all. This isn't a problem in itself, but there's a reason the stars use lighting experts; its absence reveals our flaws.

Other than maddeningly generous helpings of reverb (What Matters Most, for instance, appears to take place in a long forgotten well), you'll only occasionally come across noticeable effects at all. This might appeal to the purest of the purists, but it's a tough sell for those of us accustomed to radio ready sounds, even in the context of a glee club.

Vibratos can be mismatched. Pitch is considerably better than the average group live (and much of the album was recorded live — though oddly without an audible audience) but worse than the average studio recording. It makes numerical scoring difficult.

The lack of compression leaves volumes far too rangy. The singers' tones blend well, but their mix is often off as if they sang around a single mic and some voice stood too close or momentarily sang too loudly.

The overall sound of the group is uncomfortably dark because of the ever-present reverb. Most of the time, the production seems mildly awkward; rarely does it highlight the talented singers. It's hard to believe that the normally rock solid team at Liquid 5th had anything to do with this release, much less mix one track and have Dave Sperandio master all of them. Fans of this powerhouse production studio's work would do well to skip this release.

Of note, High Street A Cappella features an enjoyable George Michael-esque tenor on Georgia and Thriller. Unfortunately, he, like all the soloists, publishers, original groups and songwriter affiliations, remains uncredited. His performance along with the group's usually good blend, strong dynamics and capably toned basses and tenors make the album more listenable than it might otherwise be. In the end, this release is best suited to the fans and family who seek to relive the sounds of High Street's undoubtedly impressive live concerts.

Really? Finally out from under the ironclad rule of the choir conductor, and this is the music you choose to sing? High Street A Cappella formed from alum and current members of The Ohio State University Men's Glee Club, and the repertoire of in the cool of the evening reflects the group's roots.

As a fellow music nerd, I enjoyed singing You Are The New Day and Ave Maria as much as the next nerd, but there comes a time when the choral music that taught us to sing becomes tiresome, and, like the youth of every generation, we want to bust out and rage against the machine. The machine is, in this case, stodgy choral directors, a musical destiny to which each and every singer of High Street A Cappella seems doomed.

Half the album is choral songs and most are blandly bad. Even the self-proclaimed King of Pop's hit song Thriller is tainted with Faure's "Requiem". Only Sleeping involves lyrics like, "please don't spoil my day I'm miles away and after all I'm only sleepin'". Can you feel the glee? What Matters Most proclaims that "what matters — is how well we loved — ea' chuh-uhtherrr… It's not how long I held you in my arrrms, in my arms. What matters is how sweet the years — too-geh-ehtherrr.". You Can Close Your Eyes is one of those melancholy choral songs with lyrics that begin affirming life but conclude ending it ("I don't know no love songs, and I can't sing the blues anymorrre. But I can sing this song and you can sing this song when I'm gonnne."). Choir directors eat this stuff up! They get moist in the eyes!

You Are The New Day and Ave Maria, both arrangements that most of RARB's readership could sing blindfolded and earplugged, are pleasant exceptions. High Street A Cappella performs both songs well, with a freedom that is unusual for these songs's recordings. The group pleasantly takes its time, allowing crescendos to swell naturally and chords to ring. The group has recorded its choral songs live in an acoustically beautiful church, which infuses long chords with a wildly natural reverb — a welcome departure from the mathematically calculated reverb that my ears have come to expect. But this lovely reverb and the group's avoidance of these song's usual stiffness are the songs' strengths; the blend and balance are rough and the intonation is only decent.

Georgia has a plucky energy and nice solo harmonies. The soloist performance is solid, though the arrangement forces the melody into several underwhelming soli moments. To call Late in the Evening an uptempo version of Paul Simon's song would be an understatement. The song is too fast to enjoy the headbobbing funkiness of the original. The song accelerates out of control; by 1:40 the soloist is barely able to spit out the lyrics and the background parts are muddy. This tempo was a terrible mistake. Spooky sounded good. The soloist has good presence and strong style. The bass line is nice and clean. The arrangement is simply and doesn't tend toward muddying up. The group ruins a solid performance with a crazed Green Goblin cackle (Spooky, get it?). Radiomatology is a sophomoric campus-specific song about dating; it's not relatable to the rest of us.

So, I guess if we take this album in the context of our small little world of a cappella, in the cool of the evening isn't so bad. There is a time and place for hokey English language choral music. But take High Street A Cappella out of the sheltering arms of a choir-loving audience and this group would be reliving the abuse of high school.

For this former Buckeye, the name High Street evokes fond memories of my two years in Columbus. The doo-woppy barbershop sound of the band named for the main street that defines the eastern border of The Ohio State University proudly reflects the energetic buzz and vibrant campus excitement of any given school day. Though the group doesn't define itself as being a collegiate group, its men are culled from some of the best vocal groups of the university's acclaimed music program, a direct relation to the quality and execution of the music heard here. Save for a few recording flaws and poor song selections, in the cool of the evening delivers a strong performance by these Ohioans.

It seems standard now for these new-to-the-scene groups to try and pack as much genre variety into their freshman and sophomore releases: with everything from doo-wop to classical to pop, the execution is all over the charts from great (Georgia) to bland (What Matters Most). And with half the songs recorded in a local church and the other half recorded in studio, there's a clear, audible distinction in blend, echo, and tone.

The studio pieces are more appealing, with a clear, delightful blend and a nice use of dynamics. Lack of vocal percussion doesn't diminish the energy of Spooky, and the arrangement makes good use of jazz chords and the delightful low bass (even though the attempted trill on the final note comes off a little sloppy) to conjure up images of a not-so-normal, slightly creepy girl. In studio, blend is dead-on, and difficult chord progressions sound simply effortless. Georgia is a lovely album opener, showcasing the group's skills in backup and solo performance (no soloists are indicated in the paltry liner notes), reminding me of a kind of mix between Kenny Loggins, George Michael, and the Four Seasons — in a good way. I really love the boppiness of these upbeat, bass-propelled pieces, which leaves me absolutely confounded about some of the other songs heard here.

Is it even legal to record "New Day", Star-Spangled Banner and Ave Maria anymore? I thought the aca-police outlawed this ten years ago. Needless to say, besides good blend and breath sounds, these are two songs in the cool of the evening could have certainly done without. The last piece to have been recorded in the church, however, fares better than the other four, though just barely. You Can Close Your Eyes, led by a beautiful baritone and backed by gorgeous dissonant minor chords, creates a vocal texture with more depth and originality than the traditional pieces. There is a major flaw on this track, however, in which the producers (purposefully or not) include about a minute of patter between the vocalists during which they actually criticize their own performance as not having enough "frenetic energy" as previous performances. What a downer, and what a misplaced sound bite.

Still, the pieces that are great are quite memorable. And with an album sound so close to live performance, High Street A Cappella is deservedly gaining popularity as the hot new group in a cappella-deprived Columbus. As far as records go, in the cool of the evening is neither musically creative nor cohesive as a whole, but the vocal execution leaves me wanting to hear more of High Street's stylistically best genre: doo-wop. More focus on the street corner sound High Street is named for should help the group advance its talents further than in the cool of the evening allows them to demonstrate.