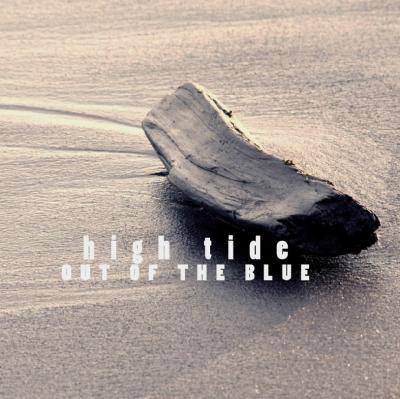 High Tide is a high-water mark for Out of the Blue. The group is improving incrementally.

High Tide makes Freefall sound shallow and ragged. The group has further embraced the role of the studio, boosting the eq on the basslines, running low grade effects on background vocals of nearly every song, and working hard to differentiate voice parts through panning, balance, and time and tonal effects. The intonation and blend problems that plagued Freefall are less obvious on High Tide, but it is time for Out of the Blue to stop compromising on quality.

High Tide is consistently uneven with moments of sophistication sandwiched between moments of amateurism. Accidentally in Love is well sung with good energy, some decent layering, and a good build through the bridge. The arranger deals cleverly with the difficult pause that's built into the song's transition from chorus, adding an artificial harmonium keyboard effect on an "ee-oo" syllable. The gimmick works beautifully to sustain our attention as we wait for the solo line to re-enter. But the bridge duffs with a "beer neer" guitar solo. The album's second best song, The One and Only, has a thumpy bass drum kick and a good backbeat. The "big chord" choruses are the biggest and most layered of anything I've heard from Out of the Blue with good blend and no pitch problems. But the crash and ride cymbals sound like leaky steampipes, not brassy plates of rock 'n roll glory.

Most infuriating is the group's medleyism. Superstition's funk is interrupted with the disco of Stayin' Alive. Sex Bomb, admittedly a silly song that needs any help it can get, features brief references to South Park and Rob Thomas's Smooth. Snippets of U2 songs ruin and render anticlimactic a limply underarranged bridge of Fix You. Yes, I get that Coldplay sounds like U2 lately, but these invasive alien phrases completely overshadow Fix You and its glorious, anthemic bridge. Why cover the song if not to nail the bridge? Matinee is a true medley of Franz Ferdinand's Matinee and Take Me Out and The Killers's Do You Want To. All three are good songs that deserve unabridged treatment. Here, the arrangement is half-hearted, relying on the gimmick rather than more thoughtful creativity. The bottom line: If a song isn't good enough to stand alone, then commit to some songwriting in the arrangement or don't cover it at all. Snippet medleys are a cheap, amateurish way to impress or score yuks from a vapid, unthinking audience. I find them insulting. Don't add pieces of another song unless it makes a complementary musical statement.

The album's best song is Fastball's The Way and reveals the potential of Out of the Blue. Within the first minute, the ear is treated to three tonic textures. The arrangement is very nicely executed, with good layering and variation between verses and choruses ("dak ittuh dow", "dank", solo harmonies, well-placed lyric repetition, a secondary melody). This recording is a well-balanced blend of energy, natural vs. effected voicing, and solid intonation and rhythms. The song's parts work together nicely… and there is not a single freaking medley or snippet to be heard.

Out of the Blue should continue to embrace the studio and refine its sound. The group needs a solid year of intense focus on the details of singing. Ironing out those final pitch problems and paying closer attention to blend within layered voice parts and dark vowels in individual voices should really polish the group's steadily improving sound.

The boys from Britain are back. And as Martha would say — "It's a good thing." Overall, the album High Tide is a step up in quality from the group's last endeavor Freefall. I could take a moment and point out the foreshadowing in the titling of each album. But I'll let you readers make your own conjecture.

Unfortunately, they aren't keeping up with the rest of the world in terms of output standards. Granted my score would be a 3+ if that were possible, signifying that this recording is just at the apex of the tide rolling in before disappointingly ebbing back into the sea.

They possibly fall into recording anxiety issues if their runner-up placement at the 2006 International Championship of Collegiate A Cappella says anything about their performance talent and abilities. On the recording, there are a couple of tracks with disastrous tuning issues. Fix You. Wow. I mean, I don't really know what to say about it. It was the one song that I was actually looking forward to hearing. As I thought, "I wonder how a English/European group will sound on this Coldplay song." Not good is the answer. Though they do have the most creative bridge of any of the versions that I've heard. So they are talented in the creation if not the execution.

The opening track Superstition is excellent. I actually like the inclusion of Stayin' Alive as a bridge. It lent a great springboard for Marc Vastenavondt's achingly pure, high scream as it switched back into the main song. I thought I was in for a treat when I first popped in the album. But the following tracks quickly established a sense of mediocrity that grew less palatable with the passing of time.

It's not to say that the album isn't a lot of fun, though. I enjoyed listening to it after I got over my initial disappointment. Sex Bomb is funny. Postman Pat is just buoyant enough to end the album on an upward curve. The One and Only has energy for days. Again the bridge work in of Take Me Out lifts Matinee to new heights. So they have it in them to make a really great album. They just haven't reached that tidemark yet.

They're cute! They can sing! And they're British! It would have been really easy to pan this album right off the bat with an opener like Superstition, but overlaid against Stayin' Alive and with killer production values and sky-high energy, you just can't help but bop your head. It's bouncy, it's got a nice beat, and for a while, it's somewhat listenable, but as the album progresses, the tracks grow less and less appealing. From the energetic opener to the closing track (the theme to a BBC kid's show — thanks Wikipedia!), it's a downhill slide.

Not gonna lie, I still hate Accidentally in Love, but it's salvaged by a listenable arrangement and solo. It's cute: super lively and a little flawed, but isn't that what shoots Brit pop boy groups to stardom? The lyrics and soloist are muddled behind a heavy-voiced background in The Way — but not with a lack of energy — during which the quarter notes are far more pronounced and plucked than any other vocal part. These repetitions quite honestly kill the interest of the song, which might have benefited had Out of the Blue maintained the almost Latin-like feel of the original. Following suit, Sex Bomb, which should be a spirited, funk/disco number is almost a mockery of Tom Jones: the relaxed soloist and blah arrangement makes it sound more New Age than '70s.

As a listener, I am often encouraged by arrangements that seek to achieve a new interpretation of an old favorite (or even new undiscovered diamond in the rough). But pieces found on High Tide seem fearful of pushing the envelope toward new writing territory. When I hear another "same old, same old" version of Fix You, it does nothing to impress, especially with I Still Haven't Found What I'm Looking For and another unintelligible piece woven into the instrumental bridge. Sometimes, you just have to leave well enough alone; Clemson TakeNote really hit this Coldplay number out of the ballpark for me last year and I haven't found a group to top its overwhelmingly melancholy, woeful character.

Though I've gotta say that as much as I've panned Jack Johnson in the past, I found Rodeo Clowns a more convincing song, with light percussion, a heavy but not overwhelming bass, and clicky percussion that kept the piece floating. Out of the Blue seems more successful the less they play around with the studio knobs. I don't love the emo-pop of Franz Ferdinand's Matinee in general, but the parts that stand out to me are the less manipulated vocals, the background syllables that are actually distinct.

High Tide is within spitting distance of the mark of "good" on the RARB scale. In its effort to cover a wide variety of genres and head in a lot of different directions, the results are a mixed bag of highs and lows. For a group making its way into the international a cappella scene, it's a decent release, but one that surely does not stand up to its American colleagues. And with contributions from Tat Tong and Freddie Feldman, I'd have expected a little more control and cleanliness. Messier than its inspiration yet still full of spirit, High Tide is a respectable if not accomplished release.