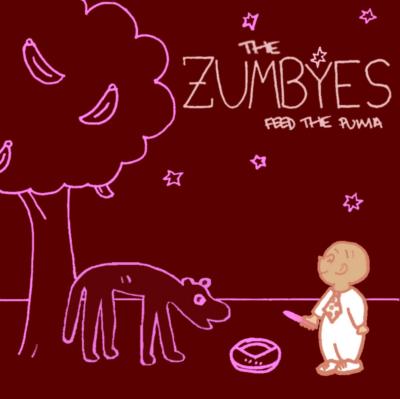 I am saddened to report that what I found most interesting about the Amherst Zumbyes' Feed the Puma was the group's name, which appears to simply have been made up made up by one of the group's charter members some 57 years ago. The name just stuck ... Lord knows why, but it did.

There's really very little else about Feed the Puma that engaged me quite as much as their name, except perhaps that the work offered up by the Zumbyes forced me to reconsider the ranking "average" as it applies to all-male collegiate a cappella. While much of what is featured here might have passed for average fifteen or so years ago, the CD's rampant tuning issue, alternately too simple or too uninteresting arrangements, and unflattering production just don't pass muster even as "average" in this day and age.

On their website, the Zumbyes claim that "from the outset, [they] adhered to the theory that blend is the single most important element of small group singing." I beg to differ, and offer up tuning as the single most important element of just about any singing. Sing alone, sing with a small group, sing with a huge chorus — if you ain't singing the right notes, the rest just doesn't matter all that much (ok, maybe you can hide in a huge chorus). To be fair, the Zumbyes do accomplish their goal: their blend is significantly better than their tuning, but their tuning is so shaky, especially in quick-moving passages, and especially in the Tenor Is who are way too frequently called upon to push the limits of their range, that it just doesn't matter. The arrangements, which regularly feature voicings at extreme ends of the spectrum and no chordal center to speak of, don't do the group any favors in the tuning department either.

Examples of the above are just too numerous to mention, but consider the first two tracks which are really a mess throughout. Ditto for a good deal of Here Without You (particularly the words "about you" towards the beginning), most of Can U Handle It and a sizeable chunk of Christmas Time Is Here (especially "sleighbells in the air" which is downright painful). Technical production is also of little help as the group certainly sounds like they recorded en masse, rather than in parts or individually, thereby providing limited editing options — and if the tuning in the final product is the best of those takes ... well, you get my point.

There are a few moments that are worthy of middling praise: Hit That Jive Jack is among the group's best work, ideally suited to their abilities with vocal lines that sit squarely in the middle of their ranges, unison rhythms for the most part, and harmonies that are jazzy without being too complicated for their own good. The King's Singers version of And So It Goes is lovely too, though as a cover of an a cappella cover, I kinda found it pointless. And What's Your Name, in the group's repertoire for 30 years or so and offered up here with some revised lyrics, brought a nostalgic smile to my face, albeit with a less-than-compelling arrangement of an already-not-very-complex song.

All in all, this mediocre work at best. A "friends & family" album. I don't even have much in the way of advice for the guys except step 1) sing the right notes and 2) then and only then should you worry about everything else.

Feed the Puma is a great yearbook album for a not-so-great year of the Zumbyes from Amherst College. The chapel-style recording techniques emphasize the lackluster energy and laissez-faire attitude the group has towards musicality and musicianship. On the flip side, all of their fans are sure to gobble it up, because it probably sounds just like the group does live — concert memories are strong purchasing incentives.

Actually, the CD is a bit misleading. Four of the first five tracks have some pleasing elements about them. Take September for example: it hits a great groove and has excellent leads — even though the balance in the background is horrible. 'Round Midnight contains some juicy chords and a smooth vibe when it is in tune. For me, the Zumbyes' signature song is Hit That Jive Jack. They killed with it at the ICCA championship a few years back. This version has all the pep and verve of my own "concert memory". Here Without You has the best choral singing on the album.

And when they go awry — wow — it is beyond belief. Can U Handle It sounds like a bunch of screaming and Wang Chung Feng was possibly a good idea at some point in time.

And I wish I could tell you what was the purpose of the hidden track. "No Tango/Tengo"? Not sure. But it must hurt. IT MUST.

So while Feed the Puma isn't going to win the Zumbyes any new fans, I'm sure the die-hards bought more than enough copies to send the guys to Japan. Have fun on the trip!

When a RARB reviewer is assigned a new album, he/she will usually get the assignment before the actual album. While I always try to keep an open mind, I couldn't help an eye roll when I heard I was reviewing a group called the Zumbyes, with an album titled of Feed the Puma no less. Then, when I cracked the disc open and found a picture of a bunch of guys in polka dot ties with a guy in a giant banana costume I thought I knew for sure what I was getting myself into: more men's jocular banality recorded solely for the group's own posterior enjoyment.

Imagine my surprise when I actually began to listen, for these men sure do take their music seriously. For a start, they take an approach I haven't recently heard on a collegiate album: actually letting their voices do the work. This is almost unadulterated singing. There might be some subtle mixing, but there are almost no effects, and it approximates what I think these guys would sound like live on an un-mic'ed stage. They also offer a powerhouse repertoire, ranging from Nat King Cole to the Beach Boys, Marvin Gaye and even a song sung entirely in Chinese.

The albums gets off to a good start with Grapevine. Decent arranging, fairly solid tuning and blend, good musicality and a spirited soloist got me thinking I could easily dig 50 minutes of this album. Then things took a turn for the worse on September, as the group is clearly outmatched in trying to come up with a good arrangement or in singing the arrangement they have effectively. (The soloist still rocks, though!)

After the first track, I could pretty much take or leave the majority of the album. Unfortunately, the group's performance has some major flaws. The basses manage a consistent blend, but the other parts clearly have several people almost singing the same thing. Tone is unfocused and airy throughout, but especially when the tenors sing in falsetto. Intonation is fine when the members are within an octave and a half of each other, but falls askance when parts are spaced widely or singing dissonance, especially on Christmas Time Is Here. While the jazzier tracks can sound pretty decent, more modern choices like September and Good Vibrations just sound empty. Finally, what's the deal with the hidden track? Could anyone not in the group possibly find any enjoyment in several minutes of studio antics? Doubtful.

Despite the flaws, the Zumbyes have a strong foundation to build on. Soloists are very nice — nuanced, unforced, versatile. Musicality is also solid, with appropriate dynamics and swells, and their soft ballads, such as Lately, have the perfect mood. I also liked the repertoire, and found myself especially bopping along to Hit That Jive, Jack and Can U Handle It.

With a bit more refinement the Zumbyes' next effort could be stellar, especially if they carve themselves into the jazzier niche of collegiate men's groups.

To order this or any other Zumbyes album, send a check payable to “Amherst College Zumbyes” for $13 per CD plus $3 S/H to:

For more information you can email the group.