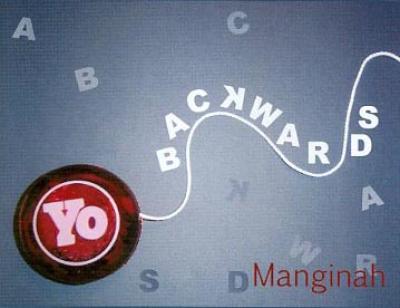 Decent songs and decent singers ought to add up to a decent album, but here they don't. That's the bald truth about Yo Backwards, the latest from Brandeis University's Jewish a cappella group Manginah.

More rehearsal time might have helped, along with a blunter assessment of what's really ready to record. If the group members don't have enough time or money for that approach, best to slap a "yearbook" label on this and print a few hundred copies for families, friends and bar/bat mitzvah clients. The rest of us will give this a pass. Few of these songs are in tune, and the various efforts at studio assistance are innocuous but ineffective. The sopranos are shrill, the baritones are fuzzy and the whole thing just doesn't tune right.

At least the tempos are good. The majority of this album bounces along quite nicely, with a fair bit of groove. Yalla Bye is downright catchy. Soulmate also caught my ear, not just because it has more English in it, and I quite liked the textures of Geulah. There's clearly some arranging talent here, as well as a good ear for what makes a good song. Variety also is a good sign — these songs are generally distinguishable one from another, even to a non-Hebrew speaker like me. Most are pop, except for Maoz Tzur, which sounds classical and may be traditional, to judge from the lack of liner note credits.

With all of those good things, it pains me to pan this album. But it's just not easy on the ears. I hope the good singers of Manginah had fun making it, and I hope they remember it fondly as they get on with the rest of their lives.

Being a former Jewish a cappella performer and still a big fan, I've seen Brandeis's Jewish a cappella group Manginah perform live on several occasions. Audiences, often fellow students, and visiting parents/extended family always seem to be having a terrific time and "shepping nachas", i.e. taking great pride in the performances and musical accomplishments of their sons/daughters/relatives/friends.

Unfortunately, that's really the best I can offer in connection with Manginah's third album, the awkwardly-titled Yo Backwards (get it?).

This is collegiate a cappella circa 1990, when arrangements tended to be pretty simple, soloists didn't often blow the listener away, tuning was sometimes less than perfect, vp was seemingly in its infancy, and in general, the experience of singing a cappella was often more important than the music-making itself.

A decade and a half later, we all know the sophistication and professionalism that has become the hallmark of the best in collegiate a cappella. Sadly, Manginah has been left well behind the curve.

The inconsistencies and trouble spots are almost too numerous to mention: scattershot tuning throughout, both between voice parts and even within unison voice parts; "ooo-ahh" arrangements that are more simplistic than what most high school ensembles are performing these days, often absent a true bass line altogether; soloists who are often not equipped to vocally handle the complexity of the material; extremely rudimentary vp that lacks both a solid kick drum and a popping snare; a good deal of repertoire that is either outdated or has been done to death in the Jewish a cappella world (though admittedly, may still not yet be known to many a casual listener); and, most inexcusably, mixing that does the group absolutely no favors.

This last point was particularly troubling for a group that is based in the Boston area, where a number of terrific a cappella producers and studios can be found. For the most part, the mic settings for this recording are as dry as the Sahara. I'm guessing the group recorded as one rather than in individual parts which may have left fewer mixing options, but given the group's tendency toward suspect tuning, surely some effects were in order (let alone some auto-tune!). Rare are the moments of true ensemble sound, and better attentiveness to the groups needs and weaknesses by their engineer would definitely have been warranted.

There are a few bright spots to be had: the choral arrangements tend to be better than anything with multiple moving parts so HaMasah (recently selected for the upcoming BOJAC — "Best of Jewish A Cappella") and B'Shem Hashem are pleasant if not quite inspiring and Maoz Tzur is quite good, though the lack of attribution to its composer, Benedetto Marcello (or its arranger who was not Marcello) is pretty inexcusable. Dorit Ingber's solo work is a standout both on HaMasah and later on Balbeli Oto, and Meira Soloff's singing on Darkenu, especially when joined in the duet sections with Miriam Jacobson, is very lovely.

But all in all, this is "friends & family" album — one to play for the grandparents so they can "kvell". For the rest of us, we'll just keep playing our old Shir Appeal and Kaskeset CDs for the best in recent collegiate Jewish a cappella.

Songs from a World Tour of the East Coast was a raucous romp through traditional Hebrew language songs and spoofs on REM/Weird Al Yankovic (Spam in the place where you ... ), Sugar Ray (Every Purim), The Muppet Show Theme, and Adam Sandler's ode to Hannukah. It was breathy, unbalanced, miked raggedly, and many songs began with all voices singing the melody line. In short, the album was the Jewish equivalent of what one might expect of a high school youth group choir.

While Manginah still needs more rehearsal time, Yo Backwards exposes a group dangerously on the brink of taking itself seriously.

Hannukah Hey Ya is not an example of this. The song is a regression to the a-musical silliness that marred the group's previous album, but it illlustrates a theme: Manginah sounds much better singing songs in Hebrew than in English. Hey Ya crams an already bad song with hokey references to Hannukah ("Manischewitz, ‘schewitz, ‘schevitz ... and a kosherized pickle" instead of "shake it like a Polaroid ... "). The intonation is just as grating as the original and this version is just as repetitive but lacks the thumpy hip hop beats. Soulmate's arrangement is full of sonic holes where everyone in the group comes to a stultifying halt. This regretful love song has no chance to build emotionally because it stutters to a stop every four bars. The soloist blandly sings her way through vacuous pop lyrics; her delivery is elementary.

Yet the group can sing pop. Yalla Bye, perhaps because of its suspicious resemblance to Your Body is a Wonderland, is quite pleasant and engaging. The soloist has a likable voice and a matter-of-fact delivery that strikes me as charmingly genuine. The solo harmonist complements his voice nicely in the choruses. The Hebrew lyrics are surprisingly diverse, with unexpected sounds every verse. The song is active, bouncy, and uses a hugely diverse set of syllables combined in creative ways like "dim dim" against "jimmuh limmuh", "oogah chuh-guh", "doowah dah-doh", "oo" against "yammuh". And the song swells to a satisfying climax. There's not much more to ask for!

Ensemble singing in Hebrew is the highlight of Yo Backwards and the strength of Manginah. B'Shem Hashem begins with rich, nicely spread chords and smooth blend. The group moves as one unit, easing smoothly into chords and matching timbre and intensity beautifully. The song moves into a march-like 6/8 time at 1:30, and the extra wattage of an inspired women's section tilts the song's balance and draws the ear upwards, away from its warm center. But the women's passion is worth sacrificing a little blend and balance, and the men's passing harmonies end the song with dignity.

Darkenu is a sensitive, tenderly sung ballad full of lovely counterpoint harmonies. Two soloists take turns offering heartfelt performances, differing only in their vocal tones. The first soloist is slightly undersupported, yet her attention to detailed delivery is entrancing. The second soloist sings farther back in her throat, but this serves to thicken her tone, which is especially clear and rich. The song has an organic, human feel and a reverence that is moving.

Individual songs on Yo Backwards show a huge improvement over "World Tour", but Manginah still has room to improve. The women need to work on intonation, as the higher voices are often flat, especially on sustained, bright notes. Nimble runs of notes often gloss over their intended pitches (Boche el Hakirot, Balbeli Oto). Several of the female soloists underemote while others have flaws in their tone (shrill or nasal). The whole group needs work on breath support. Weaknesses in the male voices are somewhat vague, much like the male parts. The men need to establish themselves with more energy and cleaner entrances and cutoffs to avoid a muddled sound. The bass part and vp would gain needed depth and impact with more eq. This easy studio adjustment would only benefit a group with such well spread chords.

Manginah, you are on the cusp of great things. Stick to your roots. Rehearse rigorously. Add more low end eq.