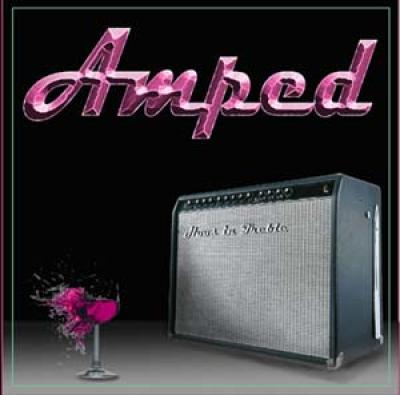 Cheerful, grooveful music fills this new record from Hoos In Trouble. Amped is a good name for it — there's plenty of electronic boost here. And it works. On this disk, even the simplest bass line sounds better through an octave doubler. The sopranos come through crisp and bright, and the light soloists sound their best when firmly in front of the mix.

All the songs have great rhythm. You can dance, sway or bop along to the fine sounds of disco, the '80s or the oldies. If you don't like one song in a medley, just wait for the next one. Alone, for example, has a great finale buildup after the less remarkable Listen To Your Heart. The percussion is basic but consistent, and the soloists tend to have a good feel for their material, which has a surprising amount of breadth. These Hoos do a great job with Holding Out For a Hero, as intermediated through Frou Frou's dance remix, while a convincing lead saves Wouldn't It Be Nice from turning into a treacly train wreck. I quite liked the idiosyncrasies of the lead on But I Do Love You. Likewise, Cold Day in July featured a lovely solo, and the lead on Some Kind Of Wonderful has a youthful energy that carries the day.

Arrangements are the weakness here. The studio tricks can't completely cover a fairly basic approach to many of the songs. In Dreamlover, for example, there's a yawning gap between the sky-high riff and the artificially low bassline. With so little in the middle, the tuning can't hold together. Too often, the altos/basses sing long, steady notes that leave all the rhythm to the percussion, or sometimes a few homophonic offbeats in the upper parts. I would have liked to have heard fewer held notes all round, along with more layers or variations. Even songs with rhythmic background, like Name still have too many long notes booming through. Along these lines, I'd ideally like to hear more ideas from the group, and less exploitation of other people's innovative takes on familiar songs. Still, the group has an ear for songs that suit them, whatever their source material.

Overall, Amped is an upbeat, groovy record. I enjoyed it, and I'll look forward to the next one.

Hoos In Treble, the youngest female group at UVA, undoubtedly has a tough Marcia Brady act to follow with big sisters The Sil'Hooettes a mainstay on the recent CARA and BOCA circuit. Amped shows that the Hoos can hold their own, even if they haven't quite found the voice yet to really stand out.

I could take or leave most of this fairly standard track list, but Hoos In Treble does themselves a favor by selecting two lesser-known covers of a cappella staples. The result is the stunning and spare Holding Out For a Hero, courtesy of Frou Frou's electronica remake. Israel Kamakawimo'ole's haunting medley of Somewhere Over the Rainbow/What a Wonderful World works well with Tricia Kolar's heartbreaking alto. Tricia also lends good pathos to Name, marking herself as the strongest soloist among a crowd of decent but unremarkable performances. While there were no clunkers, there also weren't the vocal pyrotechnics needed to pull off a Heart cover or to do pop divas like Mariah and Robyn justice.

Mixman James Gammon is building quite the stable of southern collegiate groups, and his recent haul of CARA nominations suggests he's doing something right. My ears certainly seemed to think so — Gammon's style is clean and warm, enhancing voices rather than distracting from them. He's helped by a set of generally well-textured arrangements that, while not breaking the bank on creativity, pretty much always get the job done. However, most of these tracks could have kicked up the tempo and intensity a couple notches; I liked the pulsing chords of Name and the jazzy choruses of Can't Take My Eyes Off of You, but I could have loved them with a bit more edge behind the prettiness.

Only a few years ago, Amped would have been one of the female collegiate albums of the year. Hoos In Treble can still be proud; this album is capably and well sung, and worth a listen. But it's not particularly rockin' or creative. And with new Marcia groups like Clemson TakeNote and UGA Noteworthy pushing new boundaries of energy and arranging approach respectively, capable and good doesn't earn a spot at the top anymore. That's bad news this time around for these solid singers but good news for a cappella fans more broadly.

Amped is the third album from the all-female Hoos In Treble, who hail from the University of Virginia. I had never heard this group before, and I was pleasantly surprised by their musical, mature sound.

Amped is a very well-crafted album. The production is great. Parts are well reproduced, given the right amount of engineering bells and whistles, and superbly blended. There's some nice, not overdone octavization and your standard sequenced percussion. Yet Amped goes to show that technology will never be a substitute for real singing. The women give a nuanced, wonderfully musical performance. The inner voices are incredibly blended, moving as one and perfectly in tune. Despite the fact that the syllable choices are fairly bland (lots of "noo"s, "din"s, etc.) and could potentially be boring to sing, it's apparent that each singer is shaping her line at every point throughout every song. All phrases have beginnings and ends that lend energy to an otherwise unremarkable song selection.

Arrangements are also top notch. The Hoos In Treble seem to have mastered the juxtaposition of sustained and rhythmic notes that will give an arrangement both a sense of fullness and also a sense of motion. The arrangements are particularly suited to the strong performances the backing parts give. Arrangers also prove themselves able to handle a jazzier flair, as on Somewhere Over the Rainbow.

The excellent group blend is countered by lackluster soloists. It's clear these women are better when they sing in block than when they sing in the lead. The women don't have tremendous solo voices to begin with, and the performances are uninspired. Often groups must face a trade-off between great individual and great group voices, and the Hoos In Treble have made a decision toward the latter.

However, the main thing tempering my enthusiasm for this album is its lack of oomph. Yes, these women sing absolutely beautifully and I enjoy listening to them. But they stick to slower or mid-tempo pieces, and to call their performances gentle is the understatement of the year. There's no edge or grit, and it just gets boring after a few tracks. I felt like I never got to hear the Hoos sing loud even once in the 45 minutes they present. Even the upbeat Unwritten lacks any power.

The Hoos In Treble sing wonderfully on Amped and it's an enjoyable album. However the group's style seems better suited to more classical or jazzy selections, and falls short of being able to deliver pop/rock. A little more oomph would push the Hoos a long way.