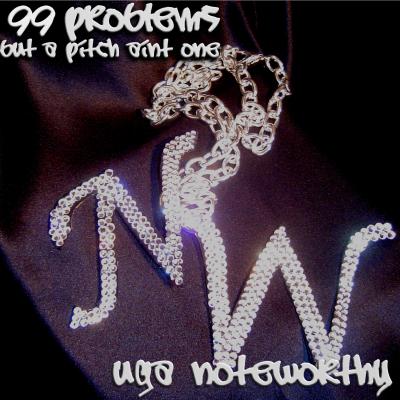 99 Problems But A Pitch Ain't One is proof positive of UGA Noteworthy's place as one of the country's best female collegiate a cappella groups. Blessed with genuinely captivating leads and rich, fearless arrangements, Noteworthy adds the perfect icing with often spectacular production. For fans of collegiate a cappella, this is a sure winner. Own it. Crank it. Check it.

With the advent of increasingly affordable studio technology, a predictable debate has developed over the proper line of demarcation between the studio blessings and curses. Perhaps the purists and technophiles will always eye each other suspiciously across the mixing board. But 99 is as likely a candidate for a meeting of the minds as I've heard in a while (with the notable exception of Hear Me Out which will delight the techs and torture purists). All the imperfections entering 99 have been surgically removed, but the result is still teeming with life and vigor.

Although the soloists, production and musicality are all worthy of attention, the arranging simply commands notice. Wonderwall and When Doves Cry are head-turning, standing ovation shockers, bold and brilliant. But Don't Turn Around, Hear Me Out, Can't Find Home, and I Want You Back are sparkling standouts in a stellar collection. Look for BOCA and CARA awards to mercilessly stalk the ladies of Noteworthy.

99 starts strong and just keeps getting better. This is one for the ages. My sympathy goes to the freshman; the next generation of Noteworthy have some mighty big pitch pipes to blow. But for now, this is one group that can lay back and bask in some well-deserved a cappella glory.

I'm tired of preaching, but it seems like I won't be able to stop for the near future. Collegiate group recordings should not consist of repertoires created entirely by non-members of the group. The ladies of UGA's Noteworthy were able to arrange only one third of the twelve tracks available on their latest release 99 Problems But A Pitch Ain't One. I'll leave out the groan factor of the pun name for the album, since it's quite the feminist re-appropriation of the original.

Seriously, when you have someone like Maggie Smith in your group who can craft an original tune like Can't Find Home and a deeply complex track like When Doves Cry, why not branch out from the man? Don't get me wrong, James Gammon and Paul Berrell are at the top of their games — both of them are work horses to the nth degree. And the two Marks (Chilla and Lambeck) add great tracks as well. I'd just like to see the ownership come from the performing members of the group. It just adds an extra level of artistry to the mix.

The production creates a deeply velveted smoothness that simply resonates throughout the entire disc, the only blip being the ill-conceived closing number I Want You Back. Mo-Mo, no-no. The octavizer adds a depth that doesn't seem forced or fake while the sonic timbres of the upper voices dance trippingly over a solid groove. Noteworthy is possibly the best-balanced group that I've heard in the past two years.

Run, don't walk to get your copy of either 99 or Sing 3 if only to hear the excellence that is Wonderwall. Burrell's arrangement magnifies the beauty of the voices in Noteworthy to make it just that: beautiful. No wonder it's captured the attention of nearly everyone in the a cappella community. Casey Branch is divine. Tracks like Hear Me Out, Behind These Hazel Eyes and Breathe will be on anyone's top 10 list. I'm being a curmudgeon by not giving the album a "5", but the group knows what it has to do in my eyes to earn one. They are so there.

In many ways, 99 Problems is a lot like this season's "American Idol": many middle-of-the-road tracks and a few real standouts, but nothing outstanding compared to albums that have come before. In fact, the songs on 99 Problems match quite nicely with some of the season six "Idol" wannabes. (Note: This review was written in Week 1 of the Top 12 finalists.)

There's the Antonella Barba of the group, How Will I Know, to begin. To paraphrase Simon Cowell, it's a very pretty song, but I just wish the soloist could sing better! The arrangement is rather lacking as well, relying on standard syllables and an octavized bass for a sparse background that mixes in random lines from (to name a few) Britney Spears' Crazy and the Fine Young Cannibals' She Drives Me Crazy. With such a run-of-the-mill arrangement, legato words identifying the backup notes, and such a processed sound, the song falls victim to too many an a cappella gaffe.

I Want You Back suffers a similar malady, not the least of which is unoriginality. This is Haley Scarnato, a nice vocal but ultimately forgettable. The song begins with promise with a cute, peppy lead, but the belted part in the middle ends up in head voice and only brings disappointment. In this category are also Behind These Hazel Eyes and Devils and Angels, two other tracks that found their way into the 2006-2007 a cappella rotation, and have appeared in far better form elsewhere (this season's Feelin' Good, performed twice in the last week of February as the finalists were being narrowed down). Say goodbye to Sanjaya Malakar and Phil Stacey.

All four of the aforementioned songs, as Simon might say, are too big for the voices performing them. The talent is certainly there, but the emotion and vocal power to convince the listener is simply not there. It should be noted, though, that Meg Reynolds has some unexpected vocal chops that are buried as the duettist on Behind These Hazel Eyes. While she performs a decent lead on Don't Turn Around, it's on the Kelly Clarkson track where she busts out a killer belt. This gal, like "AI"'s Stephanie Edwards has some undiscovered potential.

Yet scattered throughout the disc is an amazing potential top three, if you will. Can't Find Home, self-written, arranged, and soloed by Maggie Smith, is a soulful Gina Glocksen, ripe with colorful tone and a unique personality. Interestingly, it reminds me a lot of Transit's cover of the bluesy/funk number Home off their self-titled album. With a little bit of revision and a similar workup, Noteworthy's track could achieve total success. Hear Me Out is a stellar arrangement with a simple yet appropriate soloist in Lakisha Jones. With nice punctuation and syncopation, uncluttered background vocals, and engaging lyrics, this track is one of the best; it's well suited to the talents of Noteworthy. (It's this combination of good song selection and star power that will take Lakisha all the way.)

In the end, though, there can be only one American Idol winner. And on 99 Problems, there is only one track worth a "5". Wonderwall is the clear, consistent Melinda Doolittle of the bunch. Unique, different, and unabashedly intimate, Noteworthy's take on Ryan Adams's version of Wonderwall best represents the talent pool so evident in the rest of the songs but fully manifested in one overwhelming winner. Wonderwall will not soon be forgotten, having already landed a place in the collegiate a cappella Hall of Fame on BOCA 2007.

The songs on 99 Problems are not, for the most part, the Kelly Clarksons, Clay Aikens, and Carrie Underwoods of recorded a cappella. And while pitchiness (as the judges might say) is not a problem, song selection, arrangements, and originality certainly are. Simon Cowell would call it a safe effort, perfect for the cabaret, but ultimately "boh-ring". And Randy Jackson would give a shout-out to say "Dawg, it wasn't your best performance, but you really kicked it on some of those tracks." Paula Abdul, of course, would love it. But this judge/reviewer will conclude by saying that as a whole, it's not a definitive work of a cappella, but some of the better tracks do merit the recognition they received from being CARA nominated. In the end, the season 6 AI contestants and 99 Problems don't hold a candle to their predecessors.