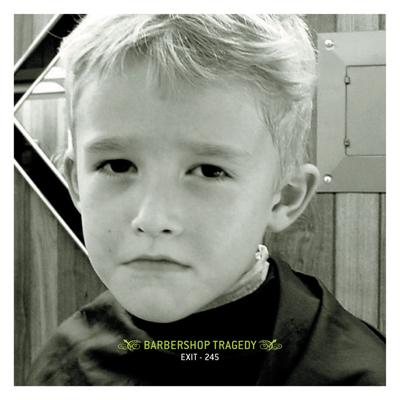 Exit 245 of James Madison University doesn't waste any time coming out of the gate. Barbershop Tragedy has possibly the best album art I've reviewed in six years. Gorgeous, melancholy photographs depict the process of coercing the cutest little boy ever reluctantly into a haircut: sheer brilliance. And the first grade class picture used for their group roster is the comedic icing on the cake, as it painstakingly matches Exit 245's all-male roster to Ms. Myers' coed class, row by row. Collegiate groups take note — this is what albums should look like.

The first track would leave you to believe Exit 245 is more than just smart marketing. King of Wishful Thinking is an absolutely fabulous arrangement, taking this well covered song and deconstructing it into a new, vibrant, vocal band styled gem. Listening to it, I was reminded of the first time I heard Rockapella's take on Tempted and realized what a cappella arranging could really achieve.

This makes what follows the opening of the album and the playing of the first track all the more disappointing. The rest of Barbershop Tragedy is all over the place, from a lurching take on Invisible that had me actually missing Clay Aiken (the end of the world is nigh) to the shimmering pop-country of I Melt, with a lot of pleasantly forgettable stuff in between. Producer James Gammon continues his trend of spinning Southern straw into golden sound here, but I think his Rumpelstiltskin touch can only go so far. Much of the album feels a bit too deliberate, with slightly laborious tempos and energy. The almost preppy Cry Me A River lacks the dirty edge needed to take it over the top, and sloppiness keeps Take Me to the Pilot from what should have been a soulful, snappy ride. The soloists here acquit themselves admirably, but Brian King stands out with soaring, searing turns on I Melt and Roxanne. It's no wonder those tracks are the obvious keepers on the disc (despite a comically high bass line that mars the latter's wonderful Moulin Rouge meld). But it also unfortunately makes me suspect that Exit 245 is simply a well packaged concoction of capable but customary singers, with a great graphic designer, talented mixer, and one kickass soloist on the team. That's not a bad thing, but it's also not quite the promise that the first five minutes of my interaction with Barbershop Tragedy hinted at.

Is Virginia the hot spot for a cappella today or what? James Madison University's all-male Exit 245 add a quality offering in Barbershop Tragedy. Strong arrangements and strong singing allow Barbershop Tragedy to poke its head above the generally indistinguishable electronic wash that characterizes many of today's collegiate a cappella albums.

The one trait about Exit 245 that most struck me was versatility. This is a fairly long album (almost 50 minutes) which showcases a wide range of styles including traditional and modern rock, pop, ballads and country music. Most surprising is the consistently good quality. Rare is the collegiate group who can churn out decent performances on both ballads and up-tempo tunes, not to mention the balancing act required by mid-tempo jams, but Exit 245 is such a group. While not the best track on the album, Cry Me A River remains interesting and well presented even following Don't Cry, a stunning ballad with wonderful musicality. They even manage a decent job of Clay Aiken (perish the thought) with Invisible.

Needless to say, the singing is pretty good. Tuning and blend are solid, and production is above average even if I did find the basses a little too washed for my taste. I could have used a little more bass throughout. I enjoyed several of the arrangements, especially the opener King of Wishful Thinking. Considering the dozens of previous versions I have heard, I found myself surprised to like this track. I was most impressed by the soloists which tend toward greatness. I especially liked Brian King; he offers a CARA-nominated performance on Roxanne, but I thought he peaked with a fine rendition of I Melt.

My main criticism of Exit 245's previous album, Solve For X, was that it was wildly inconsistent. They seem to have fixed much of that on Barbershop Tragedy, as there are no awful tracks. Despite this improvement, there is a smattering of throwaways that don't add much, tracks such as Still the One and Easy Lover that hold Exit 245 back from a truly standout album. If they can deliver top performance for a full 50 minutes, the next release will be a real keeper.

Those of you who have read my reviews for a while know that I love a good road trip a cappella album. The kind that keeps me going through winding, backwoods North Carolina one-lane highways, or the kind that makes me want to roll down my window and get everyone else stuck in I-40 traffic to sing along with me. I'm happy to report that Barbershop Tragedy is exactly that album. From beginning to end, it's inventive, creative, and an overall fantastic listen that's a refreshing departure from your run-of-the-mill collegiate male pop a cappella album.

What's so great about Exit 245's latest release, besides its excellent production, nice diversity of above-average soloists, and choice of repertoire, is that many of its arrangements are not merely transcriptions of the original songs, but innovative re-creations that break the mold of typical a cappella covers. Clay Aiken's Invisible becomes a percussionless "In the Still of the Night"-ish street corner doo-wop number instead of the bubble gum pop number Aiken made into a hit. King of Wishful Thinking opens with a delightful four- or five-part into, develops a new rhythm with emphasis on different beats, and has a tasteful, multi-textured bridge that works rather well. And Roxanne, the best re-interpretation on the album, is simply stellar. Gone from the first few verses are the familiar reggae chords and syncopated beat. Soloist Brian King nearly puts Sting to shame with his powerful, emotional ode to the titular prostitute. Although completely new, the arrangements don't distort the songs to the point that they're foreign and indistinguishable. They're still quite hummable, and most are quite memorable.

Some of my other favorites that are arranged analogous to the originals include Take Me to the Pilot, Don't Pull Your Love, Still the One, and Easy Lover. Yes, my tastes also incline toward classic rock, but I'm afraid the more contemporary pieces fare a little less successfully than those previously mentioned. Cry Me A River's execution is sadly a little too 2003 to compete with the timelessness of some of the other arrangements. And while I liked All Things Considered, the country flair isn't Exit 245's strong suit.

There's no actual exit 245 on I-40 in North Carolina, but the James Madison University group's sound will be heard up and down the highway for years to come, blasting from my car speakers. A fantastic, restrained a cappella album that's not at all arrogant, Barbershop Tragedy is definitely not the catastrophe its risky title may have implied. A surefire hit with lots of promise from this emerging Virginia group.