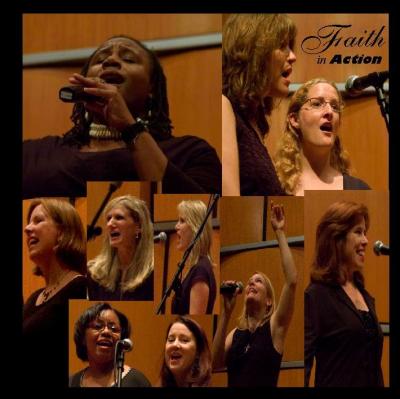 Faith in Action Live is a collection of ten concert tracks from a Boston women's a cappella group with a self-described jazz gospel sound. A Christian message runs clearly and proudly through the repertoire, but FIA manages to deliver it without the sanctimony that sometimes mars other Christian albums. Unfortunately, this doesn't negate the fact that we're not getting particularly good singing along with the grace.

Mild but persistent pitch issues crop up throughout the album, but the larger issue is the blend. At best, Faith in Action sound like a serviceable act at my old church's Friday night talent show. At worst, I'm reminded of the choir in Sister Act before Whoopi Goldberg got a hold of them — a cacophonous melange of warbly altos, shrill sopranos, and generally tremulous singers. Traditionals like Courage My Soul and Show Me the Way allow the group to mask its deficiencies with unison harmonies, whereas the majority of the repertoire, arranged in a more contemporary style, leaves each individual singer exposed unflatteringly.

Fully half of the tracklist are original compositions, which deserves notice; these, however, range from somewhat passable (the neo-spiritual groove of It Ain't Right) to stultifying. Instant-message inspired tracks like 2 R Better Than One are better left to pop chanteuses under the age of 20, and sloppy execution (e.g., stumbling over quick-sung lyrics like "half the trouble and twice as much fun, with a chord of three we can get the job done") doesn't help.

Onstage banter at the close of one song exhorts the audience, "Does it get any sweeter than that?" It probably doesn't; the pictures and text on the FIA website and liner notes scream earnestness and authenticity. It's just a shame the voices don't match the good intentions.

Sometimes recordings will hit a person on two levels — a visceral, emotional level, and from a purely technical standpoint. Such is the case with the debut disc by Faith in Action. Hailing from Boston, the "higher-powered women's a cappella group", lifts the spirit in devotion, not in delivery.

I have clamored on before about the yearbook recording. What perplexes me is that such a characterization isn't limited to the scholastic arena. Greatly enthralled by songs on their eponymous disc, I want to give the CD a score of 4, but as a marketing tool — the artistic achievement renders it a 1. So, I decided to be generous and give them a 2.

Several of the songs are performed and recorded in front of a live audience at the 10th anniversary concert of the group. The others are recorded in studio without the use of sampling or sequencing. That's a very strong choice to make in this day and age. Unfortunately, in this instance, it's not easy to discern which songs are which; the clapping audience tends to be the only clue.

Most of the musical issues on the disc — balance, blend, tuning, dynamics and intonation — could have been helped with the aid of the tools available. Multi-tracking the bass would have provided a stronger foundation on which the upper voices could have locked chords. (And isn't a strong foundation the base of any religious endeavor?)

Five of the songs are penned by members of the group. That really "saves" them. There is a creativity evidenced by the songwriting and the melodies created. The arrangements don't always serve the group well, yet I find myself compelled to listen to their messages — the mark of true evangelists. Hence the high repeat score. Even when my ears begin to bleed from a wreaked chord or screeching sopranos, I'm still listening to the songs. Still listening to them. Wow. I can't help it.

Faith In Action Live as a album is not for everyone. In fact, I'm feeling selfish and will say that no one else will really appreciate it on the level that I do. If you are general a cappella enthusiast, you shouldn't even bother trying.

Faith in Action offers a respectable line-up and satisfactory vocals for Christian a cappella listeners, though predicting that Faith in Action Live will fly off shelves would be a risky assumption.

Generally, music groups (a cappella and otherwise) open their albums with a hard-hitter to show off their goods. Faith in Action would have been wise to rearrange the order of their album, but after a weak beginning, we hear a commendable, energetic group of women. Highlights include Julie Kinscheck's stellar horn solo on It Ain't Right, a feat so impressive I've never heard the likes of it before. The lovely duet in Down to the River to Pray is worth hearing more than once, and powerhouse We Are is a call to arms standout on this live recording. And for a live album, the sound throughout is generally consistent, balanced, and clearly audible — conditions rarely achievable on live works.

It is Faith in Action's star, Toni Franklin, who takes this album to a different level. When Franklin's on the scene, and she is quite often in these ten works, it's hard not to be wowed into a quiet stupor. But her talent has an undesirable effect, bringing to light the performance gap between her and her group members. This observation is most evident in the soprano section, where wispy voices and shaky pitches are prevalent. Another undesirable effect is the blend problem Faith in Action possesses, where the ensemble often strives to be ten soloists instead of achieving a cohesive, steady, tight tone. It's certainly a justifiable angle for gospel-infused music, but a solid blend is just so critical to a cappella because it can significantly affect tuning. And there were definitely tuning issues on Faith in Action Live.

That said, I still must recommend this album for Ms. Franklin and Faith in Action's passionate energy, two unforgettable points of interest on Faith in Action Live.