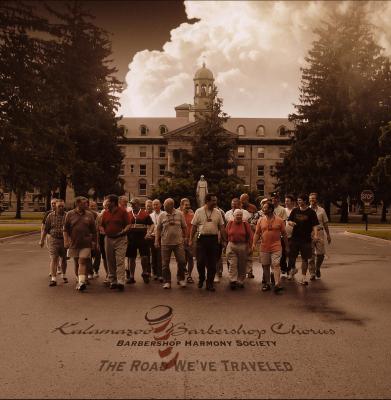 The Road We've Traveled is a collection of men's Barbershop tracks from both the Kalamazoo Barbershop Chorus and its quartets. As Executive Director and Producer of CASA's East Coast A cappella Summit, I have programmed barbershop to be featured each year. I have seen many a barbershop performance garner a standing ovation. But what is it about barbershop that's so compelling? I'd have to say two things: the incredibly expressive phrasing and the uncompromising pursuit of perfect ringing intonation. Nothing on The Road We've Traveled resembles any of that barbershop. This is the sound of an all-inclusive community chorus where the goal is participation and the tragically fated pursuit of excellence.

The intonation is that of the average live chorus, which is to say like hacking through a dense jungle to determine a pitch center. Tone colors range from passable to unlistenable. The entrances and cut-offs are (what's the kindest way to say this?) generously democratic.

Although a respectful degree of loving attention has been visited upon the songs' dynamics, the performances still drop like stones to the bottom of a dark lake. If there was any genuine emotion in these performances, all proof has been erased.

It's important to note that barbershop is difficult music. Not only are the harmonies challenging, but anything less than a stellar performance usually fails miserably. Barbershop comes alive in the harmonic arranging. When that fails to lock, when the soaring, swelling, ringing chords are gone, you have little left other than sickeningly sweet sentimentality and century old attempts at humor. It's not pretty.

Despite the great efforts involved in preparing and recording the tracks and the redeeming social value of these ensembles, this is, with few exceptions, about as weak a release as I've reviewed since I joined RARB nearly a decade ago.

The Kalamazoo Barbershop Chorus Barbershop Harmony Society is an approximately 20-member barbershop society from, you guessed it, Kalamazoo, Michigan. The Road We've Traveled is the first album they have submitted to RARB, and while I applaud the initiative of seeking feedback I am unable to applaud the music on this disc.

The Road We've Traveled isn't very good. The main stumbling block is poor tuning and balance. This is especially apparent in large group numbers such as the opener I've Got A Gal In Kalamazoo and The Lord is in the Place. The album does feature several tracks sung by smaller groups of folks and these tend to fare a little better, but even within these there are some standouts for poor tuning (for instance, She Didn't Say No.) The men can't seem to quite get that basic building block of most music down: pitch. Without decent pitch, other tuning and blend aspects such as part synchronicity, timbre, vocal production, vowel unity, energy and feel can't really get off the ground.

The Kalamazoo Barbershop Chorus is also impeded by poor production. Again, in this regard the smaller numbers (such as When It's Night Time In Dixie Land) fare better: you can clearly hear all four parts and it sounds like it was actually recorded in a studio. The larger group numbers sound like they were being caught on one or two mics at the back of a muddy rehearsal hall. This makes it very difficult to discern emotion, dynamics, or occasionally even individual parts. Under such conditions, it's no wonder tuning and blend weren't very good. Post-production seems to be nearly nonexistent, though such a traditional group adding electronic bells and whistles might only make it sound more bizarre. Regardless, on their next effort these men need to do a better job of capturing and reproducing their sound.

In the end, I don't feel great about panning an album by a community chorus where the members are clearly in it for a good time and not to make world-wide music waves. But when taken in comparison to the typical album that I review for RARB, it just doesn't stack up. If you have some personal connection to The Kalamazoo Barbershop Chorus, perhaps you will enjoy The Road We've Traveled. Otherwise, the album doesn't cut it.

As a newcomer to barbershop music, my listening experience was until recently limited to New Release, whose performances at Harmony Sweeps last year and at SoJam in 2005 may have set my expectations too high. Nevertheless, Kalamazoo Barbershop Chorus falls short of two of the fundamental goals of barbershop: intonation and precision.

The Road We've Traveled is a collection of barbershop songs, some performed by a chorus of several quartets, others by individual quartets.

Tuning issues abound throughout the album. The sonorities are often unconvincing, and the ringing overtones I expect in barbershop music are absent. Those performed by the quartets, while tighter than the chorus numbers, are no exception, though Each Time I Fall in Love stands out from the rest of the album in its rhythmic and harmonic precision.

The album's lyrical content — limited to sweethearts, barbershop singing, and the Lord — make this already dated and inaccessible musical style even harder for me to appreciate. What the gentlemen of Kalamazoo must have considered very droll bits scattered throughout the album furthered my irritation. I asked several people before eventually learning the definition of the term "skin flint" from my father, who is fifty-six.

The members of Kalamazoo Barbershop Chorus obviously enjoyed making this album, evidenced in part by its length and by the inclusion of the two hidden tracks. I struggled to form some constructive criticism to impart in my review, but given the spirit of the album, which seems to chronicle a barbershop event of some kind (liner notes explaining the event would help), I imagine the participants are pleased with it.