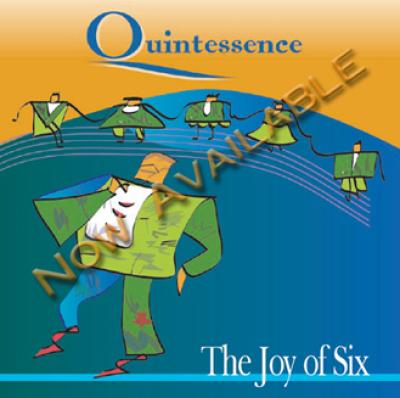 With clear influences from groups such as The Manhattan Transfer and The Real Group, Quintessence has been around for nearly 25 years singing squeaky clean jazz. There's nothing majorly offensive about their latest album, The Joy of Six, but there's also nothing that warranted a high score of repeat listenability, either. What Quintessence excels in is their overall tuning: with difficult suspended 4ths and 9ths and chords typical of many vocal jazz pieces, the group clearly has spot-on singers with great ears for pitch. In addition, they also have incredible timing and diction that matches up seamlessly throughout the voice parts. Les Duettistes shines in both senses.

The recording isn't overly produced or auto-tuned to death. In fact, slightly more time should have gone into the production end to achieve a more solid balance dynamics-wise. It's a very soprano-heavy album. Because of lack of dynamics, many songs fall flat and, though technically well-executed, lack emotion. Nearly every song is middle of the road, mezzo forte, with only slight departures in volume for emphasis. On nearly every song, the bass line isn't as audible as other parts. At times, I worry notes were out of his range entirely, such as in Goody Goody and I Got a Gal in Kalamazoo. With the majority of their repertoire following a "walking bass, everyone else on words rhythmically in unison", missing a solid bass part is a pretty big fault.

Speaking of their arrangements, there are a few standouts with Birdland and I Can Recall Spain, but most songs suffer greatly because they are literally inundated with overused "ba ba da" and "doo doo doo". Listen to Summertime: it's nearly all dee doo da (and a bass saying "deeew"' against the group's "doo" is harsh). My favorite track is I Can Recall Spain; touches of its introduction is reminiscent of Bobby McFerrin's "Circlesongs", and the rest of the song is a great up-tempo, crisply tuned, widely varied arrangement.

The Joy of Six has no earth-shattering, "How on earth did they sing that" arrangements, no soloists that are fantastic (none that are truly bad, either), and the choice of repertoire has a few gems scattered throughout many "too overdone!" song choices. Quintessence certainly has talented musicians amongst their group, but the album is in need of more emotion, more variation between songs and syllabic choices, and less middle of the road performances.

The first thing I thought about when I received the debut recording The Joy of Six from the jazz sextet Quintessence was the second season of the Toon Disney/ABC Family Jettix cartoon "W.I.T.C.H." On the show, the leader of the Guardians is Will — a spunky teenager with raging hormones and massive power, who would comprehend the need for a book called "The Joy of Sex" — oh, wait, I'm getting ahead of myself. Wrong story.

Anyway, the Guardians are led by Will, who wields absolute power, and the four other elementals: Irma, Trelanee, Cornelia and Hay-Lin. They aren't necessarily witches; that's just the first letter of each of the girls' names. They were granted extra special powers from the previous season when Will started uttering the word "quintessence". Looking the word up on Wikipedia and Answers.com I found out that it meant "the fifth and highest essence after the four elements of earth, air, fire, and water, thought to be the substance of the heavenly bodies and latent in all things". Hmmm.

I think some of Will's power would have helped this recording. Not to say that The Joy of Six is a bad album. It's not. Not at all. But there isn't anything really special about it either. There is no quintessential moment where everything just clicks and sparkles. No orgasmic experience filled with wild abandon. Just some pretty singing on mostly simplistic arrangements. The chord structuring is pretty standard for a jazz group. No major tuning fiascos. Tempos are held fairly consistent and within a comfortably boring range. All of the markings of a debut recording. Nothing truly to fault the members for. But nothing to celebrate either.

Of the three originals (Acoustic Souvenirs, Planesong Blues and Kelly Danielle's Lullaby) only the last track had any memorable weight to it. And really that's because I'm a sucker for sentimentalism.

I really wanted to love Summertime — it being my favorite song in the world — but Susan Mayo's solo just didn't cut it for me at all. Something just seemed very forced. But just to show how much of a nut I am for the song, it is going into my "Summertime" iTunes folder. Same goes for I Can Recall Spain. But Quintessence's version goes to prove how jaw-droppingly exceptional was the version by Hyannis Sound. The two French songs were good, especially founder Paul Jay's solo on Les Feuilles Mortes.

The Joy of Six is really a take it or leave it kind of album. If you are missing some fairly facile jazz from your life, pick up a copy. If you want a little more excitement, read the similarly titled book instead.

My first thought when I popped in The Joy of Six was something like, "This is a debut? These folks sound like they have been singing together for years!" Alas, fears of my incompetence were soon erased when I read the liner notes indicating Quintessence — a six member co-ed vocal jazz group from Ottawa — has been in existence since the eighties and has held its current configuration for seven years. It seems it just took some time for Quintessence to actually record, and in this case it's better late than never.

The musicianship in the block on this album is simply extraordinary. Group unity is top notch, and Quintessence gels on nearly every track. (Blend is superb, vowels are identical, entrances and exits precise, dynamics spot-on. Even more impressive is the group's ability to tweak its sound between tracks so easily and seamlessly. For instance, Les Duettistes is playful and slightly tongue-in-cheek; this is followed by The Man I Love where the block is presented with just the right balance of simple and sultry to make it effective; then comes I Got a Gal in Kalamazoo where Quintessence brightens up to hit to perfect mood for this classic. The diversity of jazz styles presented on The Joy of Six not only shows off the group's vocal chops but keeps the music interesting throughout. My only complaint is after the modulation on When I Fall in Love when they just can't seem to get back in sync. For the musicianship alone The Joy of Six is a marvel to listen to.

Quintessence could do something about its repertoire, however. A debut album might be expected to contain a certain number of classics or favorites, but The Joy of Six's track list reads like a high-school songbook reprint. It's no surprise that the two best tracks are originals by the group's founder Paul Jay. Acoustic Souvenirs opens the album with a bang, and it's easily the best track on the album. Planesong Blues is a cute little track that decries the woes commonly experienced in the airport. The third original, Kelly Danielle's Lullaby, doesn't add much, especially in comparison to the other originals. I would love to see more of Paul Jay's work on the next effort.

The other thing holding Quintessence back is soloists. Every signer is featured in the lead throughout The Joy of Six, which is a shame since only Melsness and Jovaisas have the chops to be in the front. I was particularly turned off by Susan Mayo, whose vocal antics are so overdone that I thought her singing was a caricature of a lounge act added for comic effect until I realized it was consistent throughout the album.

The Joy of Six is a fine album filled with wonderful moments, and it offers something for any a cappella listener. This is especially impressive considering this is a debut album. Yet despite its successes, there are still a few elements holding Quintessence back from achieving what they could. I anticipate even better results the next time around.