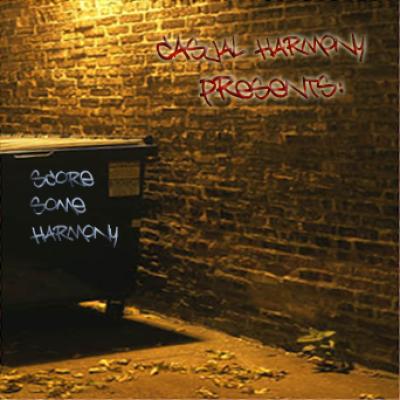 It seems to me that Casual Harmony, Rutgers's first and only male a cappella group, was formed as a way to, as some would say, "get chicks". Why do I have this impression? I was first tipped off by the liner notes, which extolled their dedication "to the propagation of orgasmic a cappella music" followed by their "one two punch of dashingly handsome young men and astounding vocal ability". By the by, the album is also called "Score Some Harmony".

All the innuendo crystallized for me as I perused their website and found this choice bit of information: "Casual Harmony, CH or Colossally Hung as some of our groupies like to call us, was started a mere six semesters ago by then sophmore [sic] Dave Rabizadeh".

Setting aside this claim to prowess, one must wonder whether the promised vocal talent is there. Is Casual Harmony merely a bunch of grunting cavemen? I think the answer is this: not merely, no. Casual Harmony has debuted with an album of which they can be proud. There are great moments and flashes of brilliance that bode well for them as a group. It is musically sound, has solid arrangements, and the production is there but not overwhelming.

The surprising thing missing is a level of aggression, power, and excitement that one would expect from a group so proud of manliness. The only track that provides a glimpse is Through With You. It is the best track on the album, not only for the groups energetic execution of a great arrangement, but also for the emotional commitment of the soloist.

Other great tracks feature soloists with beautiful voices (Aerials and Time Is Running Out), but their renditions focus more on sounding pretty than on impacting the emotional heft of the songs. While Aerials is the second best track on the album, when compared to Off the Beat's rendition of another System of a Down song (Chop Suey), Aerials unfortunately sounds a bit limp.

Score Some Harmony does reflect Casual Harmony's great potential. You should buy this album if only to provide Casual Harmony with the funds to record again. Once these guys figure out how to channel their bursting testosterone into their recordings, this will be a group to be reckoned with.

It's a risky move to record songs that have already got well-known, "seminal" versions — unless, of course, you are your college's first and only all male a cappella group. In that case, and in the case of the hundreds of a cappella backwaters of our nation's higher education system, you couldn't make a better bet. It's shocking, then, that an album brought up in such coddled surroundings could dare stand up to its full height, full of insolence, and look mighty groups straight in the eye. With Score Some Harmony, Rutgers' Casual Harmony jams a flag in the hardscrabble and claims a stake in the a cappella world.

Score Some Harmony is cleanly mixed, highly effected rock and pop that you've heard before, probably a cappella. The bass is octave-dropped, with some original voice intact. The vp mixing shows good judgment, with reasonable eq and balance throughout. The backgrounds are either filtered through a harmonizer or crushed through a distortion pedal.

Though the mixing itself is clean, Casual Harmony relied on too few tricks too often. Lines are sometimes over-intonated, resulting in the "Cher Effect" (Aerials, Superstition). A few tracks overcompress soloists, moving them front and back a little too far (I Write Sins Not Tragedies). The group sometimes overapplies the harmonizer effect, often to chords that are already full, and the result sounds overfull and fake (Jessie's Girl, Through With You).

But sometimes the mix is so brilliant it breathes life into tired songs, like We Are. The background sings a soft, drawn, open syllable "jem" which is clarified through a filter that makes its tone clear as a glass bell. The soloist has a smoky rock voice, and the complementary contrast is so stark and well executed that it's nearly visual. Further, the bass distortion is a burry, buzzy sound that balances beautifully against the clear, natural voicing of the higher tenor lines.

Other times, the group makes excellent spot decisions. The Beelzebubs own Karma Police, leasing it on occasion to Off the Beat, yet Casual Harmony's final chorus is a revelation. The meaty voice that joins the reedy, Yorke-like soloist revealed to me an unknown urge to hear the supporting harmony, and these beefed up 30 seconds make the song for me.

There's more gold in them thar hills. Off the Beat owns Aerials, but this version is warmer, thanks to the harmonizer and an inspired baritenor solo performance. Casual Harmony's arrangement is simpler yet it rocks hard and the warmth is easier on the ears. I Write Sins Not Tragedies leads off with a taut arpeggio of "bum"s and "bung"s, a counter-intuitive intro to an emo song. The soloist nails the whiny and energetic emo style, all the while backed by that taut "bum" arpeggio.

Casual Harmony isn't entirely ready to compete with the aca supergroups. Though Score Some Harmony is impressive for a rookie album, Time Is Running Out reveals a hesitance to fully rock. The eighth note "jun"s are too simple and don't drive the song. The choruses aren't half as explosive as other a cappella covers of this song. Instead, the group opts for soft attack syllables like "dah nah" to "dow now"s in the pre-verse transitions. The soloist just doesn't spit out his entrances and chew off his cutoffs. Short yet complex vp passages drive into the second and final choruses, but they make the rest of the song's vp seem simplistic. The group understands the concept of the song, but the attacks are underwhelming. Used To Love U lacks the machismo and testosterone of the Duke Pitchforks's version.

A few soloists need work as well. The soloist on Over My Head (Cable Car) and Champagne High has a good voice and technique, but his style is a little bland and his delivery is soft, mushy, and sometimes behind the tempo. Superstition is maybe 75% of the way there, with turns that are too soft and a style not far enough out on the soul spectrum. Nearing the end, his enunciation slackens and he retreats into his throat, wailing without form. Through With You's soloist has good energy, but he's a little too sweet to pull off a song as spiteful as this. We Are was nearly a "5" were it not for the soloist who sings at the same energy level from beginning to end. He should lean into the song and build it more. The soloist on Jessie's Girl sounds like he benefited quite a bit from the studio; the song seems out of his range and he lacks the control up high to hit the melisma, especially on the crucial lyric "girl". He sounds strained as if he were struggling to keep it together.

But what the heck, few rookie groups have the right to produce a first album this good. With more hard work, Casual Harmony could score some respect from groups many times its age.

Rutgers University's only all-male a cappella group, Casual Harmony, makes its foray into the recorded a cappella world with Score Some Harmony, a respectable, albeit flawed first effort. The album, with its thoroughly "modern" arrangements and production techniques, exhibits remarkable understanding on the group's part of what the components of a good album are. Smart touches of production are evident throughout, and the arrangements are bold, but as a whole Score Some Harmony is inconsistent in the execution of these ideals.

Casual Harmony tears out the box with Aerials, a heavy, forceful, mechanized track featuring an outstanding solo from Ryan Aiello and a sharply crafted arrangement from Jack Bender, his best on the disc. I expected that track to set the tone for the album, but Score Some Harmony quickly takes a turn for the worse with Over My Head (Cable Car), which, the few measures after the bridge not withstanding, is sleepy and uninspired.

Casual Harmony ups the ante every few tracks, with the opener, Used To Love U, and We Are standing out above the remaining eight tracks. Clayton Colmon adds a smooth solo to an arrangement of Used To Love U that proves Casual Harmony can sound good on both layered arrangements and those that have multiple parts singing the same rhythm. We Are, with its heavy bass line and strong solo, works in the same vein as Aerials, but doesn't quite match the opening track.

What comes in between these three tracks suffers from two problems. The first is Casual Harmony's tendency to over-complicate songs in an effort to distinguish them. When the arrangements get too ambitious, as they do on I Write Sins, Not Tragedies and Time Is Running Out, the result is a cluttered, muffled sound. The final "verse" in Through With You, added by the arranger, is a ridiculous, rushed mess, an unnecessary addition to what could have been an otherwise strong closing song. The second problem is frankly very surprising. For a group that produced strong, emotive performances on Aerials and Used To Love U, they can sound remarkably lifeless and square at times, with Superstition and Jessie's Girl the primary culprits.

It's regrettable that Score Some Harmony couldn't yield a few more standout tracks, because Casual Harmony certainly has quite a bit of vocal and arranging talent on its hands. This performance is indicative of many of those qualities. Once Casual Harmony can leave behind the mistakes and lack of direction many emerging groups make, it will be able to produce a coherent, consistently top-notch album. But for a group only three-and-a-half years old, Score Some Harmony is a big step in the right direction.