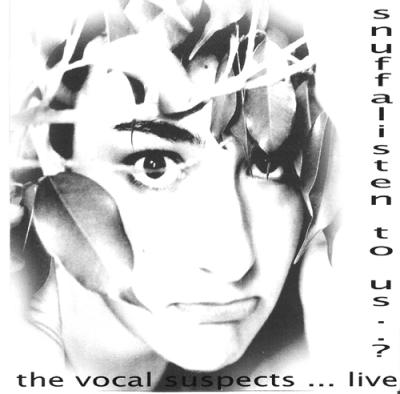 When I review an album, I always try to keep an open mind. Whether it's a group I've never heard of or a group well known for excellence — or anything in between — I try to give each group a fair shake. Thus when I received latest release from The Vocal Suspects, Snuffalisten to us..?, I tried to keep an open mind despite receiving a CD-R with no label and a photocopied insert.

Unfortunately, the album doesn't sound any better than it looks. Snuffalisten to us..? isn't an album at all, but instead a collection of live tracks that sound like they were recorded with a DAT on a one-mike setup during a concert and then burned onto a CD without any post production. Why anyone might purchase said "album" is beyond me.

I actually needed to struggle to listen all the way through. Having seventy minutes of music is a push for some of the best albums out there, and Snuffalisten to us..? doesn't even sound good. The biggest problem is almost staggeringly poor production and reproduction. The solo line is loud and the backing parts are quiet and muddled. I could barely hear what was going on in the block; bass and baritone were especially non-existent. Blend is atrocious, with individual voices popping out all over the place. Pitch is sometimes there and sometimes not, and tonics often wander from the starting note. Solos are almost uniformly awful, sounding whiny and over-sung.

Musical mishaps aside, the album is also a snoozer to listen to. Even beyond barely being able to hear what's going on, all seventy minutes sound about the same. Some tracks are slow, some are fast, but all lack attitude and a sense of energy. Maybe the visuals during the live performance kept the audience entertained, but no excitement translates to the recording.

I'm not against live albums. I think they can show off a lot of talent and can be a good option for groups without a ton of money to put into studio recording. But there is a certain baseline of production needed for clarity's sake, and Snuffalisten to us..? doesn't pass muster. In comparison to what even a mediocre studio album sounds like, there's no way The Vocal Suspects can compete. In one sense I feel bad that the production is so bad that it's hard to tell if the singing is any good, but The Vocal Suspects brought it on themselves. So for all you cash-strapped groups out there, let this be a lesson: setting up a mike or two, recording a concert, and burning it onto a disc does not an album make.

Remember when they first introduced Snuffleupagus on Sesame Street, and only Big Bird could see him? Everyone made fun of Big Bird because they thought he had an imaginary friend that simply didn't exist. I hate to say it, but I kind of wish the Vocal Suspects' Snuffalisten to us..? was the same way: a make-believe album that only the Vocal Suspects could hear.

As a RARB reviewer, I get albums like this on occasion that beg me to ask, "Why even bother?". Unless it's to get honest-to-goodness criticism (which I am certain they will get much of), CD-Rs like this aren't worth the effort it takes to record. While I am certainly not stating that studio recording and mixing make a good album, the contrary is often closer to the truth: placing a mike in front of the group in a non-soundproof room and copying the tracks onto writeable CDs will almost always make a bad album. That being said, it's also difficult to review albums like this because the sound quality itself is so poor that key elements like arrangement, performance, blend, musicality, and energy are themselves lost by the mere process. As a producer for the ICCAs some years ago, I received audition tapes that were of better audio quality. Sadly, this isn't quite the forum to preach about the philosophy of why groups record albums in the first place.

All this being said, "Snuffalisten" is difficult to get a grasp of, and at nineteen impossible tracks and over an hour of listening, one needs a strong attention span to keep up with the Suspects. What I can gather from the overall lackluster album is a glee club style of arrangements, a technique that works better for tracks like Who Needs Sleep and Hold My Hand than for the dismally mellow Sweet Child and terribly off-kilter Galileo. Soloists are simply below par on every track, between the strained low notes of Sir Duke (led by a baritone and doubled by altos who can't hit the bottom tones on "Just because a record has a groove don't make it in the groove.") and When I Come Around, headed up by a low alto whose words are nearly indistinguishable against the "jigga-jeng jengs" of the back-ups, most noticeably the higher altos and sopranos, whose voices dominate not only this track, but almost every piece on "Snuffalisten".

On a disc like this, there are few highlights, but they deserve mention simply because they stand out. I particularly like the female lead on the album's last track Mummer's Dance for hitting notes in her head voice without making my eyes cross, and I enjoyed the opening to Sir Duke, with layered arpeggios from each vocal part.

It sounds like the people who were in attendance at the concert during which most of this album was recorded had a lot more fun listening to the Vocal Suspects than I did by CD proxy. There's a momentum of energy that builds, but nothing memorable (or even average) enough to be meaningful. In the grand scheme of a cappella, Snuffalisten to us..? is one album that will soon be forgotten. Bogged down by all the trappings of a rookie album creation with no liner notes or even professional CD pressing, the best thing about this album is that it makes no pretension of being anything other than it really is, something to pass on.

The Vocal Suspects's album, Snuffalisten to us..?, is a recording of a live show, evidently.

The album is bad and the execrable sound production mostly to blame. If a score of zero were possible, that is what the production would deserve. It sounds as if there were multiple microphones on stage for the concert — solo, percussion, and area microphones perhaps — but the recording was not done at the soundboard. Instead, we get our sonic perspective from a single point, seemingly at the back of the room. The sound is muddy and ridiculously unbalanced. The kick and bass are absent.

The arrangements are not quite mediocre, relying on either inappropriate or uninteresting syllables and blocky chordal transitions.

Some of the solo assignments are questionable, most notably on Evaporated and on Sweet Child. When I Come Around is set way too low for a female soloist. Contrastingly, the soloists on Last To Know and on Mummer's Dance offer effortful and capable performances.

The album packaging offers little information — no original artists, no soloists, no information other than song titles and song lengths. I would not mind knowing who performs the percussion throughout, as he or she sounded pretty solid.

The core issue is that a huge chunk of the album is basically sonically indiscernible. The audience responds warmly at times, but unfortunately these moments mean nothing on the recording without aural or visual context.