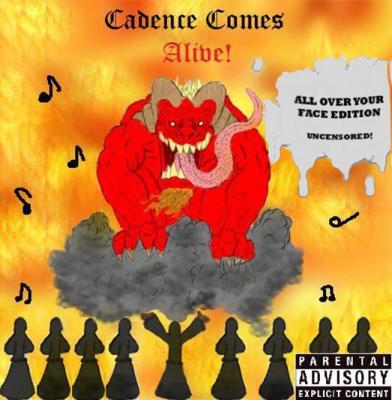 From the very first note Cadence (Occidental) forcefully reminds the listener that this is not the more well-known Canadian jazz powerhouse of the (nearly) same name. In the era before autotune, aca-producers and other easily available modern recording techniques, Cadence Comes Alive! would have been utterly uneventful. Today it's a noticeably flawed release that's unlikely to receive play from any but the most die-hard, single-minded supporters.

But let's start with pluses. The hidden comedy track made me genuinely smile. Overall, tempos are pretty constant. The song choices are usually pretty good, though often not well-matched to this group's abilities. The clean production kept most scores above the one range. And generally singing a cappella is really hard and should always be commended, so keep on singing guys!

Unfortunately, almost every measure of musicality or artistry is barren. Intonation, blend, groove, tone color and soloing are in grave need of additional work. The production can't perform miracles but at least it never makes matters worse.

Most noticeably, soloists must be able to sing the notes demanded by the songs, in tune, and in a stylistically appropriate manner. And since without exception this presents an apparently insurmountable challenge to these young singers, I would have preferred to hear much simpler, less challenging pieces sung with far greater precision.

As I've said before, listeners judge you on how well you achieve what you attempt. If your ability to achieve is diminished, attempt something within your grasp. It's much easier on the ears. The Distance is perhaps the best example of when Cadence (Occidental) makes the right match between soloist and song. The CD would have been considerably more listenable had similar choices been made throughout. The line "Hold your breath it gets better" in A Whole New World is perhaps the most unintentionally sad moment, coming as it does underneath a well-intentioned but truly strange and detuned falsetto line.

This is a yearbook for the singers and their families but a must-miss for the rest of us. When Cadence (Occidental) puts the time into fundamentals, their obvious love of a cappella is likely to bloom into some real artistry. With hope in our hearts and rose colored glasses, we look forward to their next release.

Cadence Comes Alive! is one of the worst albums I have ever heard, ever. The reader might think I am saying this just to sound mean, but I'm not. I just can't put it any other way: the album is just bad. I've never heard the Occidental Glee Club, but after hearing this album I never want to. Cadence is hampered by basic, fundamental musical errors. Pitch is all over the place, and rarely in tune. Singers are often spread across such a wide vocal range it's no wonder they can't sing in tune. Songs often wander from the original tonic. There is no vowel unity. Attacks and cutoffs are sloppy.

The worst offender is Teenage Mutant Ninja Turtles. The title of the track has five "t's", and it seems random and haphazard which ones are pronounced, by whom, and when. It's a ttt cacophony! Not even the final chords ring true or end at the same time. While the block sound isn't tremendous, soloists are even worse. No one seems comfortable taking the lead and all solos are below average. Many people are out of their range and stretching to hit the notes, or sound muffled and muted. Men sing traditionally female parts with what I can only hope is comic terribleness.

Many moments are cringe-worthy, but there are a few standouts. The repeated "Yeahy-yeahs" in War Again are so whiny I wonder how it's humanly possible to make such a noise, and the moans on Sweet Dreams sound like a dying animal. Production is also uniformly atrocious. It sounds like it was recorded in a poorly equipped, hastily assembled room and mixed by an inexperienced amateur.

There are some relative high points. Percussion is mostly decent throughout, all the more impressive in that I assume it was recorded in a single take. Probably the best song is The Distance, which has a decent sense of energy, a few well done effects, and was generally in tune enough to be palatable. I Will Follow You Into the Dark was another stronger track, presented with earnestness and simplicity, and a pretty decent arrangement. Notice I haven't even gotten to things like dynamics, emotion, blend, arrangements, artistic vision, etc.

I appreciate Cadence submitting their album for review, but Cadence Comes Alive! simply doesn't cut it against the competition. My advice for Cadence would be to return to the basics and make the songs musically solid before even attempting to record them. I think having the group listen to some well received, recent a cappella albums will also open them to what some of the possibilities are. Until then, I don't see Cadence going anywhere.

Occidental College's Cadence has some work to do before assembling their next album. The album, Cadence Comes Alive, is thirty minutes of uninspired and weak leads (with one exception), dull and poorly executed backgrounds, and blatantly amateurish production.

Luckily, the fault does not entirely lie on the group. The tuning is not as bad as it could be, and they have a rising star in freshman Jordan Miles, who contributes capable percussion and the strongest solo on the album. The group is also very young, nearly all freshmen and sophomores. I blame a lack of awareness and experience.

Cadence would do well to read more of these reviews, listen to more albums — especially groups like the Tufts Beelzebubs, Boston Dear Abbeys, UO On the Rocks, and Brandeis VoiceMale — and above all, attend more a cappella concerts and summits. Cadence simply needs more weapons in its arranging, performance, and production arsenal.

Everything begins with the leads. Miles should have had at least three solos, no question. I would also submit that it might not be a good idea to attempt a song like A Whole New World, originally an interaction between a male and a female soloist, with two dudes on leads. There is nothing humorous in the performance, but when I first listened to the track I kept waiting for the group to break down laughing and yell, "LOL WUT JK!"

From there, we have to look at the arrangements, which rely almost exclusively on "doo", "bah", and words that echo the lead. It is very difficult for a group to invest any emotion or effort into such parts. Aural Novocaine ensues. In a song like F*** Her Gently, the expletives must be totally nonchalant, not seized upon and accented, as I would expect from wannabe bad-boy seventh graders. It is the indifferent use of those words that make the Tenacious D original funny.

Next comes recording. When recording an album, a group ought to be putting its best collective foot forward. Click and chord tracks are a must. Miles should have done all the percussion. Next, edit! Don't leave an absolutely glaring vocal embarrassment like the crack at the beginning of the Come Sail Away lead. Don't leave sixty seconds of dead space at the end of a song. These are easy things to fix! That mix engineer Tyler Westen did not attend to these issues is criminal. He also chopped off the reverb decay of A Whole New World, muddied the percussion, and failed to balance the parts appropriately.

I would suggest that Cadence invest some time and money into a cappella education before investing those precious resources in another album.