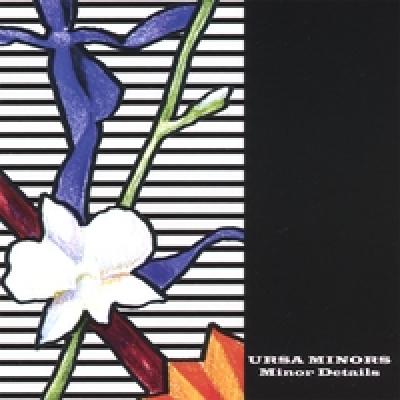 Minor Details is a fitting name for this new album from the Ursa Minors, if maybe not for the reasons they were hoping. There are a lot of nice tidbits sprinkled throughout this album, but otherwise it doesn't have much staying power. This makes it more of a high-end yearbook than a listen for the ages.

All at Sea is possibly the best song on the disk, although Fidelity is definitely the most catchy. They stand out from the rest of the album, which is a reasonably engaging mix of dance tunes, alterna-rock ballads and old-school cuts in the style of the Andrews Sisters. The tuning is pretty average — by no means seamless, but respectable enough, considering the fairly natural-sounding production. The studio only intrudes during periodic appearances of octave doubling, a technique that adds much-needed heft but also a slightly disconcerting smoothness.

Smooth is a great thing during All at Sea. It's less appealing in Real Man, which generally needs more growl. Maybe the Ursa Minors were making the most of what they had, but it didn't quite work for me. Neither did Rocksteady and Gee Baby, where less-than-perfect intonation grates on otherwise innocuous singing. On the other hand, You're the Top is so ridiculously glee clubby that a rock-era vocabulary can't do it justice. It's not the greatest performance in the world, but I dig diversity so I'm not gonna slam it.

A few other details that stood out — the vocal percussion is actually pretty good, and here and there it even sounds inspired. I also liked Shanell Lockhart's Nina Simone-like approach to Come a Little Closer, a welcome rich texture amid all the bright and chirpy. Not to knock bright and chirpy — this group does it well — but it can get a little much. One or two arrangements made too much use of the really high notes. It's good to have a little spread in your arrangement, but squeaking is pushing it.

All in all, Minor Details is a nice portrait of the Ursa Minors. It makes a great record and great demo, even if it doesn't earn a great recommendation for the unconnected buyer.

Okay, the fact of the matter is that I've been enjoying this album so much that I forgot to review it. Not since Indiana University's Ladies First released "Ticket to Ride" have I liked a women's album that focuses more on the spectrum of the voice than on the sliding of studio keys. I haven't yet heard the Bubs' latest, "Pandaemonium", but having read the reviews about its considerable departure from noticeable studio tuning, this album seems to be done in a similar vein. Minor Details is truly a delightful romp featuring clean beats and interesting arrangements, and overall is quite classy.

Opening with the fresh and airy Fidelity by pop-newcomer Regina Spektor, the Ursa Minors demonstrate a command of dynamics, blend, and emotion. Soloist Emily Shapiro is an artist in her own right; too many female leads can't find the balance between imitating the original artists and finding their own voice. Emily achieves a clarity of performance that keeps the listener's interest all the way through, from the funky staccato trills in the chorus through the sassy bridge, and the background, arranged by Jen Doorly, has some nice pick-ups and drop-outs that utilize the whole bag of a cappella tricks (staggered rhythms, repeating the lyrics, etc.) without at all turning into something hammy. Doorly also features on Bonnie Raitt's Real Man, another fabulous, energetic piece with lots of drive and kick. Percussion plays a big role in this track, and it's aptly applied, but uncredited to any performer. What I really like about these two tracks together is that they pack a real punch, are two completely different songs, and demonstrate that a cappella-covered chick music doesn't have to suck or be sappy, as is too often the case.

My other three favorite pieces feature on the second half of the album, starting with Marc Broussard's Rocksteady. Broussard's piece, slowly making its entrée into the a cappella realm, is a new power piece with a lot of pop and pizzazz. Arranger Maxine Sharavsky layers a ton of voices to create a lively percussionless outro, prefaced by a compelling build-up of volume and increasing textures. For me though, the standout song on Minor Details is the Sharavsky-arranged and -led Shadowboxer. This Fiona Apple piece is drop-dead sexy, both in lyric and in execution, and Sharavsky's talent is beyond description. It's passion and emotion, bold and brilliant. Her jazzy-smokiness matches Apple's, and surpasses almost every other Lillith Fair artist cover I've heard. It's a true success. Finally, in the midst of all of the Let Gos we've heard lately, this one isn't as noxious as the others. Sally King's arrangement is so focused and intimate, swelling with a legato background and unimposing soprano accent, that Meg Mariotti's solo truly stands out. Her innocent, languid voice isn't as breathy as Imogen Heap's, and I'm ultimately thankful for the fullness of her tone. It's a lovely way to close the album.

But for all its delights, Minor Details suffers a few downfalls. First, each of the pre-1990s songs (with the exception of Real Man) are flat and uncreative. Gee Baby (credited to Billy [sic] Holiday on the outside of the case) has good blend and a better-than-average soloist in Julia Rocco, but its arrangement doesn't quite demonstrate the sharp acuity of talent and blast of energy that the Minors seem to have. On the contrary, You're the Top has infused into it all of the cheesiness that was sucked out of the other songs, and meta-acknowledges this through its background lyrics. Mother Nature's Son is truly abysmal, and Come a Little Closer's soloist is a little too airy and unstable to give the song the delicious soul that Etta James gave to the original. Its arrangement, however, is rather listenable. Finally, All at Sea doesn't live up to the standard raised by two covers in recent memory, though it makes creative use of some staggered syllables in the second verse (think Hyannis Sound doing "Still Haven't Found What I'm Looking For") that provide a unique texture. Its soloist, though, is a bit nasal and closed-throated to achieve a fullness of sound, and she doesn't quite have the skill level as some of the other women heard here. The arrangement also excludes the kick-ass bridge that other covers have brilliantly accomplished.

I might have given this album a 5 if it weren't for the four pieces that really dragged down my interest in the music. The quality of the songs is so diverse, from the fabulous Shadowboxer and Fidelity through the begging-to-be-skipped Mother Nature's Son, that I can't justifiably give Minor Details the accolades it would get if it were only 8 tracks long. The album is a disparate mix of highs and lows and offers a dizzying array of musical genres, succeeding where many other all-women's groups fail (and accordingly, fail where many other all-women's groups are successful). Increasing the number of arrangers and sticking to a post-Berlin Wall era repertoire may help eke up the points next go-round, but this is not a bad compilation in the slightest. The good absolutely outweighs the bad, and makes Minor Details a fantastic, fun-filled release.

Celebrating their 25th anniversary with a brand new album, the Ursa Minors have successfully avoided the majority of problems that one might expect on a typical college a cappella recording. But just barely. While solidly ahead of many of their peers (especially in the all female category), I can still hear the ghosts of the Minors's past hanging around and contributing to a handful of rough patches that permeate this recording. There's still work to be done.

The album opens slowly with a lukewarm cover of Regina Spektor's Fidelity. On the positive side, this track (and in fact, this album) has some of the best female studio vocal percussion I've ever heard. However, that seems to be one of the only ways that the Minors have made good use of the studio, as the rest of their sound leans towards dull, even pitchy at times.

I was actually surprised to find that this was a John Clark production. The sound has almost none of his signature brightness, and feels very little like any of his prior work that I've heard. That's not altogether a bad thing, since a more natural sound has its charm, but it's hard to forgive some of the obvious tuning problems (again notably in the higher voices on Fidelity). It's an interesting change of pace, but I'm not sure it does this group's style any favors.

I want to give the Minors credit for their song choices. I enjoyed the hefty sprinkling of jazz and R&B on this album in the form of You're the Top (cute), Gee Baby (good soloist), and Real Man (ballsy). Also, though being generally overdone in the college world right now, I found Rocksteady to be a standout track because of how effectively these gals covered a male solo and made it their own.

All things considered, Minor Details isn't bad at all. For their next studio effort, I hope the Ursa Minors take a little more time producing their vocals, and working for better tuning and a more energetic delivery. Their sound is progressing well; it's just not top quality yet.