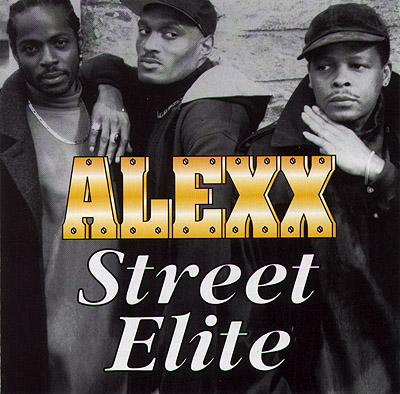 The strong point of Street Elite is that the members of Alexx generally sound like they're having a good time. They are definitely into the music that they're singing. They also lull the listener into thinking that they're in for a pleasant listen to a decent doo-wop album, because the best tracks are front-loaded into the beginning of the CD. Unfortunately, after the first couple of tracks, the tuning goes from acceptable to distractingly off to completely lacking a tonal center, not ever fully recovering. I first felt the pitch starting to noticeably wander during the fourth track, You're So Fine, led astray largely by the soloist. Then, in Stormy Weather there were problems with tuning unison/octave notes, and things just went downhill from there. Background voices also sometimes leap unpleasantly out of the mix (especially in Oo Baby, Baby and Sh-boom).

The solos range from decent (Chain Gang) to completely oversung (Sh-boom), and as the album progresses, the limitations of the singers become more apparent. Although several of the soloists are capable of soulful vocal gymnastics, others of the singers come off as raspy and lacking the vocal quality that makes a soloist pleasant to listen to for any length of time. After the first few tracks of Street Elite, I was looking forward to a mildly enjoyable listening experience, but the album unfortunately didn't go where I hoped it would.

Alexx is a currently defunct group from the D.C. area. They were known for their street performances, done in the old tradition of street corner a cappella groups. They sang a soulful blend of Motown, R&B and oldie covers. This album was the one and only album they ever produced.

I actually think it is a good thing that there are no other albums. Now it is not that these guys can't sing, because they do have some talent, but I guess that you could nicely say that the studio experience was not kind to them. The microphone does not lie, and when they put this collection of songs together, they were not doing so well. The tuning of this album is pretty bad from beginning to end. I suppose if your were tone deaf you would not notice, but I'm not, so I did.

They have rough, world-weary voices that lend themselves stylistically to the kind of music they sing. But the tuning! It messes everything up. One of the very worst songs on the album is the song Sh-boom. Just miserable tuning and intonation. It hurts to listen to and it gets worse before it gets better. Even the opener (Papa Was A Rollin' Stone) has bizarre tuning. I call it bizarre because it almost seems like they did it on purpose. The chords were very consistent in how out-of-tune they were.

Cut to the chase: don't bother buying this album. It is not good at all. If you need to find an album of street corner doo-wop, this is not a good example to choose. Find another.

Doo-Wop. This can be the sweetest or the most bitter words you can say to an a cappella fan. Historically, there has been some very good a cappella doo-wop and some very bad a cappella doo-wop..and I've both heard and sung both varieties in my lifetime. Thankfully, Alexx falls into the good category.

After reading their press release, I'm unsure if Alexx is still in existence or not. When they were (I'm assuming they're not at this point), they had a core group of three, with two others filling in certain songs on the album. They've been in existence for over 20 years, and have performed from the street corners of Alexandria, VA to the Kennedy Center. That would give them a group life rivaling the Persuasions, and it's that group that Alexx reminds me the most of. They have a very strong passion behind the music that they sing, and it comes out, especially in the up-tempo numbers. Another huge plus is that, unlike a lot of the older doo-wop groups I've heard, they actually tune!!!! I know that may sound unnecessarily harsh, but a lot of doo-wop groups I've heard put a lot of passion and drive behind what they do, but aren't as musically pure as some other a cappella groups I've heard. Alexx, for the most part, avoids that, keeping a relatively clean sound amidst their passion. Granted, there are some weird moments, but for the most part, it sounds good as well as feels good. Their rhythm and tempos are, err, very free-form, and don't always follow a set meter, but that didn't bother me here as much as I thought it would.

Many of the classics are here (Up on the roof, Duke of Earl), as well as some classics I've never heard of (Got a Job, Jitterbuggin'). Interestingly, the least listenable song was Sh-Boom, done by the Crew Cuts, as un-soulful a 50's group as you can find....while their version of Papa was a Rolling Stone is easily their best effort, tempo problems notwithstanding.

All in all, if you're a doo-wop fan, BUY THIS! This is an excellent example of everything that can be right with doo-wop. If you're a general a cappella fan, you will probably like this for the most part, enjoying much of it while occasionally finding the skip button. My thumbs up is based on the fact that they're both moderately musical and they're having FUN....and that's the spirit of a cappella that I love to hear on albums.

Like other three-person groups, Alexx struggles to fill out an arrangement and make it interesting. Sometimes on this CD they're joined by a couple friends to help with that problem, but their other major problem is simply tuning. Even on the tracks where the soloist does an admirable job, the tuning problems and lack of consistent blend overpower any positives. The bass usually has a pretty decent beefy sound and a nice "street corner" sound vaguely reminiscent of The Persuasions' Jerry Lawson, but most tracks still unfortunately aren't salvageable.

I understand that the group started singing doo-wop on street corners and has been influenced by The Moonglows, the Persuasions, and the Miracles. But Alexx has neither the tender touch of the Moonglows nor the raw verve of the Persuasions. While the transition from live performance to studio recording may have been important for the group to make, the result is an overall disappointment to the outside listener.

One or even two of the singers may have promise in musical performance as the front man for an R&B group somewhere, as some of the solos exhibit a degree of potential. But this group, this album, isn't a product most people should add to their collections. I won't go into specific unpleasantries I experienced while listening to the CD the few times I did; just sleep easy tonight knowing that you don't need to hear this album.

Street Elite by Alexx offers very raw a cappella, enthusiastically performed by three main singers (abetted by some studio voices). One is reminded of early efforts by the Persuasions: the sound is throaty and sincere. Perhaps a good term would be "genuine", in that the music seems sung straight from the heart. Unfortunately, its sincerity has left little room at times for more thoughtful musicality.

There are problems throughout the album, especially of tuning and tone. While the standards are carried across competently, some of the more varied selections, and in particular the jazzier songs, are more clearly experimental; the group is obviously not at home in some of what they are singing. Tone matching is a moot point, with such varied vocal quality among the main singers and the studio suppletives. Although the rough-hewn solos' sound does well for some songs, it is strikingly out of place on others. The background voices are sometimes of jarringly different quality.

The members of this group would benefit from vocal training, principally in the area of more deliberate, more conscious singing. The album shows up their inconsistencies, resulting in a mixed bag which is far from always enjoyable. Wait for future releases, or see the group live; skip this album.