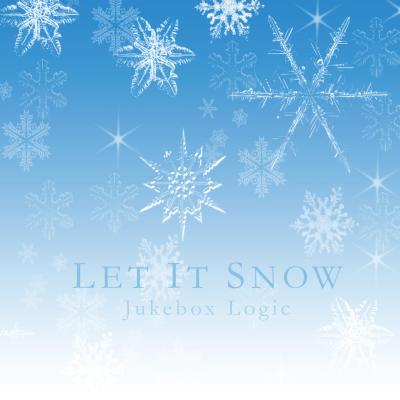 Jukebox Logic's modernist reinterpretation of Little Drummer Boy is emblematic of Let It Snow: it's sleek, smooth, and crystal clear. Even the breaths are consistently timed, lingering in the cold air. Let It Snow gives a contemporary facelift to traditional Christian Christmas songs.

I'm partial to the Bing Crosby and Ella Fitzgerald set list myself. When it comes to Christmas, I prefer crooners and jazz and egg nog, heavy on the nog. Jukebox Logic swings a little more ecumenical and so Let It Snow is more Baby Jesus than Baby, It's Cold Outside. Sleigh Ride and Let It Snow are the two secular songs on the album, Christ Is Born is a contemporary choral-style original, and the rest are more Biblically focused songs that many of us know and love from church.

Jukebox Logic embraces the repertoire, respecting the melodies but sometimes writing nearly new songs around them. These ancient songs, so familiar to us, could inconspicuously insert themselves into any family's holiday playlist, yet to those whose ears survive the fatiguing first salvo of holiday tunes after Thanksgiving, Jukebox Logic brings a newness and creativity to the music.

Sleigh Ride is a straightforward transcription from brass and strings (and buggy whip) to voice, but most of the album is heavily reworked. The revered Silent Night shares only lyrics with the traditional song. Little Drummer Boy, with an impeccably timed "piggituh pum pum pum" interplay, features a gutsy, rock-voiced soloist, vocal percussion (oh, the irony!), and a breezy female solo harmony interlude.

We Three Kings opens with an unconventional "din din din"/"doom"/"shin deh" background that listeners would be hard pressed to associate with frankincense and mangers. The soloist has an unmistakably rock-styled voice, not quite Creed or Pearl Jam but along those lines. This provides an interesting juxtaposition, especially when a myrrh-sniffing baritone of more kingly proportions chimes in and the soloists begin alternating verses. This tension of new over old runs throughout the album.

Similarly, "one in din, one in din, din doh" ushers us into Once In Royal David's City, which listeners will only recognize courtesy of melody and lyrics. The baritenor sings in calm, soothing tones, with a clean voice and crystal enunciation. The group, aware of the repetitive nature of songs that survive the test of time, takes care to vary verses. In this case, the group writes in two entirely new rock ballad bridges. And guess what? They're quite good.

O Come O Come Emmanuel is a moody, pop rework. The rock soloist leads unaccompanied, as it were. The bass enters on a wetly delayed "doo" that, with complementing baritone and tenor line, grows into a mesmerizing arpeggio of "doo"s.

When Let It Snow spins down, I'm left with a different sense of the holiday spirit. I love the joy and style of my crooners and swingers, the reverence of the giant choirs, the sentimental intimacy of the singer-songwriters, (the strangely pulse-pounding kitsch of the Trans-Siberian Orchestra), but Jukebox Logic's Let It Snow lets me listen fondly to the old Christian standbys while keeping me engaged in a style of music that's fresh.

Let's face it: I am not a fan of Christmas music. I grew up singing Oseh Shalom, not O Come All Ye Faithful, and when the radio stations start playing Christmas songs the day after Thanksgiving, I retaliate by playing the LeeVees (with Guster's Adam Gardner) and Matisyahu as loud as I can take it. Okay, not really, but you can see why the so-called "holiday season" makes me so jaded. So when another Christmas a cappella album arrived at my door it excited me as much as fruitcake, until, that is, I popped it into the CD player and, like the Grinch's, my heart grew three sizes.

Jukebox Logic could be the best-kept secret in holiday music. This latest release has the kind of arrangements that make great a cappella sound deceptively simple, but with impeccable blend, clear and emotive soloists, and inventive arrangements, it has a certain sophistication that is only heard from groups like Cadence and Chapter 6. Indeed, much of the stylistic touches here are reminiscent of those top-notch pro groups. I was truly struck by the clean lines, percussive musical syllables (see, for example, Little Drummer Boy), and new takes on old classics (Silent Night and Let It Snow). Let It Snow is neither campy nor oversentimental like the crap you hear in the mall all December long.

What makes Let It Snow an instant success is its appeal to a diverse audience, with creative and modern a cappella conventions applied to well-known pieces. From the gently lilting voices of the four Jukebox Logic members and their absolutely lovely guest soloists (the wife and father of group member Graham Cochrane) emerge soaring, stirring verses and choruses. Familiar tunes like the instrumental version of Sleigh Ride, complete with horse whinny, have new life with light, bouncy lines and innovative background syllables that aren't limited to "jen", "doh", and "bum".

I especially enjoyed songs with which I wasn't as familiar, like We Three Kings. Its use of all of the vocal parts and dare-I-say sexy tenor lead pitted against Michael Cochrane's gorgeous baritone culminates in a brilliantly executed choral counterpoint. Once In Royal David's City also has a texturally interesting sonic background that keeps tempo despite the lack of use of actual vocal percussion. I've gotta say, though, that even The First Noel was moving. I don't know if it's the clear and confident soloist or the complete genuineness of the performance, but the spirit of the season may actually be getting to me. I can picture myself curled up in front of a raging fire, snow falling outside, lighting my menorah, listening to the soothing tunes of Jukebox Logic…

Well, maybe not, but without a doubt this is one of my favorite albums of the year. Any group that can turn a Christmas cynic into a supporter is not to be taken lightly. From start to finish Let It Snow is attention-grabbing, interesting, and original. When you need a respite from bad elevator Muzak as you complete your holiday shopping or want an appropriate soundtrack for your Christmas Eve dinner, Let It Snow is certain to not only liven your spirits, but to uplift even the holiday skeptics.

When Little Drummer Boy, the opening track on Jukebox Logic's Let It Snow, opened with a beautiful stream of overlapping "pum pum piggity pums", my hopes were high that Let It Snow would be a Christmas album with a contemporary a cappella twist. While I wasn't proven entirely incorrect, Let It Snow struggles to find a balance between reworking Christmas classics (Little Drummer Boy, Silent Night) and sticking to their traditional, choral-based arrangements (The First Noel, What Child Is This).

Compounding the problems on Let It Snow is that Jukebox Logic does neither consistently. The quality of the "reimagined" tracks ranges from fantastic (Little Drummer Boy) to disappointing (Silent Night). The arrangement of Silent Night as a power-ballad was particularly jarring, and at times lent the tune an out of place eeriness. So too the album's more traditional arrangements run the gamut from the pleasant The First Noel to the repetitive, all-too-busy closer, Christ Is Born.

The quality of the singing is also inconsistent. The quartet's pitch is strong, but the timbres of the four voices are so disparate that despite their equal intensities, blend is almost non-existent. The soloists are often mixed far too softly and hurt by trying to sound too much as if they've been plucked out of the church choir.

I would be more specific, but the woefully incomplete liner notes told me more about Graham Cochrane's family and their involvement with the album than it did about the other three-quarters of Jukebox Logic (their names, for the record, are Ryan McAllister, Michael Snow, and Austin Robey). No hint as to who sings which part, who is responsible for which arrangement, and who worked on producing, mastering, or mixing the album.

Bottom line: nothing on Let It Snow will have your holiday guests turning their heads and asking about what's playing the stereo. Let It Snow is an easy pass for all but the most die-hard holiday music fans.