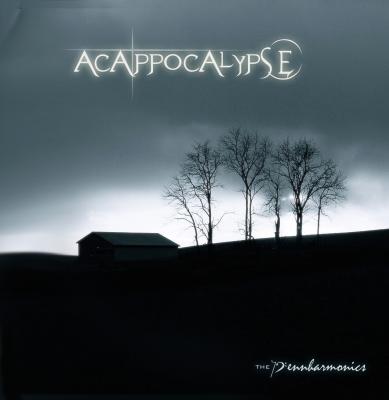 Acappocalypse is one of those titles that gets me all eager to crack the plastic. My imagination starts racing: will this be something different? Will it be dark and edgy? Will it be thematically cohesive? Will it be original? Then I listen and reality sets in. It's just a pun. The Pennharmonics deliver average sampling of pop crossover with better than average leads, but nothing as remotely groundbreaking as the album title might imply.

The lead power in the Penns is all in the XX chromosomes. This is just a bumpy year for Penn male leads (with the possible exception of Lightning Crashes which while not exceptional isn't too tough a listen.). Thankfully, they're well aware of this, favoring the ladies by about two to one. A wise choice, as leads are the Penns's best asset, with production a close second.

As with many groups, strong production gives a few songs the bump they need to rise above (Jumpin' Jumpin', Fa Fa and to a slightly lesser degree, Such Great Heights and Bring Me to Life). But when the production takes a back seat and the singing is closer to its raw collegiate form, the tracks are noticeably weaker (I'd Do Anything for Love, TV Show Theme Song Medley). One can imagine that these tracks work better live than as live recordings.

Though the production often adds, I will condemn one ruinous production choice that opens the album and shows up in similar form leading in to The Way. The telephone/old tape player/old record player/whatever effect is mangled badly. Not only does the effect last too long in both cases, but it just sounds wrong. It's clear what the Penns were going for, but it doesn't happen.

The intonation is about average in accuracy, but exceptionally natural sounding — an unusual combination in collegiate a cappella these days. Most groups require obvious computer assistance to lock chords at all. The Penns would seem to have left at least their leads in a very natural state. This makes the Penns braver than most groups at any level or style, a cappella or not.

Acappocalypse is a collection of mostly unrelated pop songs, sung, produced and arranged at an approximately average level. Unlike the title, it's nothing Earth-shattering. Could this group have delivered a truly head-turning CD? Glimmers of possibility abound, but it looks like we'll have to wait 'til after the Acappocalypse to find out. Here's looking forward to the next release.

On Acappocalypse, the Pennharmonics fumble out of the gate. Instead of grabbing their audience from the first downbeat, this co-ed group from Pennsylvania State opts to regurgitate the tired routine of replicating a car stereo featuring a song from the album.

Fortunately, Acappocalypse quickly recovers the football. For the most part, it is a (very) tastefully produced, well sung little album. But the car stereo gag is symptomatic of what plagues the Pennharmonics. Overdone covers, curious arrangement choices, and the occasional unworthy solos characterize what could be a really great disc. It's like a guy who aces the first date, guessing the lady's favorite drink, complimenting her dress, touching her elbow or whatever, and then throws it all away by talking about comic books and Ron Paul back at his place.

The kicking start could have been achieved by the more than competent rendition of Carrie Underwood's Before He Cheats. When Christine Pirot tells me she grinds the key into her ex's car, I believe her, in a good way. The sopranos have no trouble contending with the tricky moving lines here and elsewhere, which is key if you're going to cover The Postal Service. Their strong tuning and confident enunciation anchor some classy arrangements throughout.

The girls in this group can definitely sing, which makes me wonder why the group has opted to saddle them with chestnuts like Torn, Criminal and Bring Me to Life. Yep, they're all here, and Eve 6 too. I don't know Greg Heleniak, but I would encourage the other members of the group to make him a mix tape or, better yet, buy him an iPod and an iTunes gift card as a welcome gift to the new century. There's a whole new world out there, my man, and I'm not talking about Aladdin.

The Pennharmonics seem aware of the fact that they are treading well-worn territory. They do their able best to pep up Natalie Imbruglia's Torn, and they throw the kitchen sink at a rather absurd rendition of Lightning Crashes that introduces elements of gospel, soul, and doo-wop.

As is the case in many co-ed groups, the male soloists are largely inconsistent. Jim O'Brien does some nice work, and makes lemonade out of the Lightning Crashes chaos. I found myself wishing he had changed places with the Chasing Cars soloist, who confuses the understatement of the original with disinterested deadpan.

That said, none of the men really fall on their face. Derek Pae lends an effluvial Ziggy Stardust meets Neil Diamond flair to Meatloaf's unremarkable dirge. Actually, the live songs do quite a bit to prove that the group has legitimate talent, though the TV theme song medley is as disjointed as it is unnecessary.

This group has the stuff, and would benefit from more judicious song selection and fewer flights of arranging fancy (including a moratorium of use of the "neer" syllable altogether). If the Pennharmonics keep it contemporary, keep working with Simon Rogers, and keep challenging their solid sopranos, they'll produce something special. As it is, they have produced something worthwhile for fans of the genre.

I first came across the Penn State Pennharmonics at the 2005 ICCA Midwest regional competition at the University of Wisconsin-Madison. That night, the group performed an utterly original version of the Beatles's Come Together that was as sweet and slow as molasses. Those Pennharmonics are nowhere to be found on Acappocalypse. While the Pennharmonics's newest release is a passable album, it disappoints by featuring too many a cappella staples, like Such Great Heights, Torn, Bring Me to Life, Criminal, Inside Out and Chasing Cars. Though the album features an original by Sara Schonour titled Chagrin, the impressive quality of that lovely song isn't enough to make up for the album's tracks reading like a list of "what not to sing".

The album is decently tuned, with respectable energy, fine arrangements and your average collegiate soloists, but production does little to emphasize the Pennharmonics's successes. The hollow, distant sound throughout the album is underscored by strange gimmicks like the doubled solos on Such Great Heights and Torn, and the excessive use of echo. The engineering works hard to make the Pennharmonics sound four times as large as they truly are, particularly when the group collectively opens into an "ah" vowel. The phony ethereal quality is maddening, and the production's emphasis of the block over the soloist is unfortunate. Other low points are the shrieking, poorly tuned soprano descant on Before He Cheats, the incorrect chords in the lead-in to the chorus of Inside Out, and a constantly flat solo on Bring Me to Life.

Acappocalypse has moments of greatness in the transition from Such Great Heights into Chagrin, the "Law & Order" and "O.C." portions of the TV Show Theme Song Medley, and the arranging and singing on Chasing Cars (with the exception of the sopranos, who once again nearly tip the whole thing into mediocrity.) However, nothing is truly exhilarating or fresh, and the entire project lacks those positive qualities that I've associated with the Pennharmonics for years. Bring back the tempo changes, the emotionally charged soloists, and the originality. Let's hear more Chagrin and less Bring Me to Life.