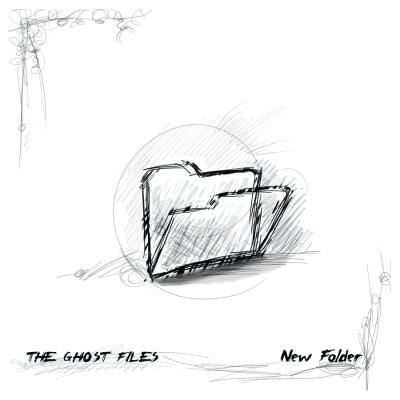 The Italy-rooted, pop-rock group The Ghost Files brings to mind the side-project supergroups that have become fashionable of late in the United States. Think of them as the vocal band equivalent to Rockstar: Supernova. There are several folks moonlighting from more established groups who form the core of this little side project, with special guests being added for their debut recording New Folder. The Ghost Files is the 2004 brainchild of Andrea Figallo from The Flying Pickets. He paired up with Erik Bosio and Letizia Poltini from the Italian jazzpop sensation Cluster to form an experimental pop trio. Lending an artistic hand is John Kjøller from Basix. The vocal mastery they bring to the table makes this recording an exciting debut for fans of pop-opera styled singing.

The EP New Folder firmly entrenches the group as the international equivalent of the New York Voices, a powerful jazz group that were compared to The Manhattan Transfer. Granted, The Ghost Files seemed auto-tuned to death, but it's still a pleasant and pleasing sound overall. New Folder offers up a smooth R&B-tinged pop cover as the opening track, then dives into a decidedly pop-classic vein with four original tunes before ending with two new Christmas classics inspired by the last Basix endeavor.

I Don't Know opens New Folder with an infectious groove. Guest vocalist Esmeralda Grao adds a sultry lead that caresses the ear. Figallo has added Spanish lyrics to this European hit. Doing so has added a great world flavor to this slightly mediocre song.

Then we get into the meat of what it seems to me that The Ghost Files are all about — pure, unabashedly choral soundscapes. The first of the four original tunes is by far the best. Never More Will the Wind is captivating for all of the right reasons. The arrangement is engaging, the storyline bittersweet, the singing sublime. Textually, it melts perfectly into the complimentary tunes She Walks In Beauty and Changes. Set to a Lord Byron poem, She Walks In Beauty tells the love story set forth by Never More Will the Wind from the male perspective. And it's not a pretty picture. The guys don't carry the same conviction as soloists as the female members of the group. So the start of the song is a bit shaky and only really gels once the women come in. The song isn't terrible; it just doesn't hold up favorably to the rest of the disc. Not so for Changes, which has a decidedly female bent. The ethereal quality of the female voices really floats over the backing vocals with a sweet air.

Interestingly enough, Come Back Home sounds like the "modernized" version of And So It Goes — even down to the opening chord and syllabic structure. And that's pretty much all I can say about that. Unfortunately, by now all of the music has started to sound the same, and so the interest in what The Ghost Files is putting out begins to wane.

My love of Christmas music is well documented. Here the less obvious holiday song Shine is superior to Christmas Lullaby. Both are enjoyable to listen to but neither is catchy enough to become permanent members of a holiday rotation. Or make me forget how much I loathe most holidays (unlike Basix's River which is still my top played tune on iTunes and Last.fm).

The Ghost Files is working on an album of ten romantic poems. I love the fact that they are bringing back the idea of concept albums. If the original song cycle on the New Folder EP is any indication of what this new album will sound like, I'm all ready for it. Even though this is a sampler recording, it's not to everyone's taste. If you are only digging what's contemporary State-side, the airy ensemble storytelling aspect of the original songs is not going to be to your liking. But if you are willing to experiment and have an appreciation for quality, try them out. I do strongly suggest visiting their myspace page at theghost.eu and checking out some clips, and then throwing them some cash to make this next album a reality. They are flying their choral flag and I wish to thank them profusely for bringing it to the next generation.

Rare is the debut album that blows me away. New Folder by The Ghost Files is such an album. Featuring crisp, nuanced singing and excellent songwriting, New Folder exemplifies what top-notch a cappella should be.

This Italian trio shines throughout the album. The opening track is an English/Spanish track that shows off the group's potential. I Don't Know moves seamlessly from punchy vocal harmony into a popping dance tune.

Other than the opener, New Folder is all original material. The original pieces display not only tremendous vocal artistry but also elegant songwriting. A cappella is best when songs are written exclusively for the human voice, and the Ghost Files capitalize on the diversity and emotion the voice can display. Glorious dissonances highlight delightful harmonies, and emotional intensity remains high throughout. Of course, this would all mean nothing if it were not for the group's tremendous sense of blend, articulation, and pitch. Engineering is marvelous, highlighting The Ghost File's strengths but never overpowering the singing.

Curiously, the album ends with two Christmas tracks. While they are quite good, they feel like non-sequiturs, in both substance and style. These songs feel as if they were written for children and are simpler and more straightforward than the beginning material. They just do not pack the punch the rest of the album does.

The Ghost Files is so good, I could easily listen to three albums from them, one of covers, one of originals, and one of Christmas tunes. Indeed, the biggest problem I had with New Folder is its short length, less than twenty minutes. I cannot wait until they release a full-length album.

The Ghost Files has an excellent career ahead of itself. Rare is the a cappella group that can both sing and write music well. New Folder will be one of the rare RARB albums that I listen to even after the review is over.

Meet The Ghost Files: a European a cappella supergroup including the talents of Andrea Figallo of the Flying Pickets, John Kjoller of Basix, and Erik Bosio and Letizia Poltini of Cluster. Some pretty big names there, and some pretty distinct styles as well. An a cappella fan purchasing their album New Folder might have, as I did, some pretty big expectations. In some ways my expectations were met and exceeded. In other ways however, I was surprised to find myself somewhat held at arm's length by this music. I'll try to explain.

Just so I'm clear, this is a very good album. Just see my numerical scores if you don't believe me. The things I found inaccessible about this recording had little if anything to do with its basic musicality. The singing is excellent, and the compositions and arrangements are (certainly from a technical standpoint) quite good. Tuning is spot on, as are blend and dynamic phrasing. The only criticism I could possibly offer in terms of the overall sound would be that the accents of the singers were occasionally difficult for me to understand during some of the English compositions. That's a bias born of my background listening to American pop music, but I offer it as a small warning since I suspect others might have the same difficulty.

So, with that well deserved praise in mind, what was it that bugged me about this album? I think the biggest culprit is the pacing of the track list. This album, or perhaps more accurately this EP, contains only seven songs. Of those seven songs, only one could really be considered up-tempo (I Don't Know). The other six tracks are all generally slow and emotive, ranging from lullabies to avant-garde choral pieces with unusual cadences and lyrics pairings abound. All of these songs are beautiful pieces on their own but, presented in succession, they don't make for a very balanced album.

In all fairness, I think that part of what motivated this feeling for me was that I was expecting a different aesthetic based on the people involved with the project. Seeing guys from the Pickets and Basix in the liner notes, I was banking on more of a pop/rock vibe. Had I gotten this CD in the mail from a group I recognized as more choral in nature, my expectations would probably have differently affected my listening experience.

I say all this to make a simple point: this album is a well made, beautiful piece of vocal art & that probably isn't for everybody. If you're expecting something upbeat and contemporary, you won't so much find it here. However, if you're looking for something that's pretty, passionate, and perhaps even a little tricky at times, this may be the album for you.

To order this album, visit the group's website, Preludio Music Shop, or the iTunes Store.