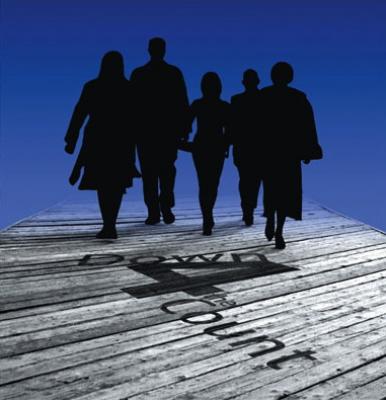 Down 4 the Count's eponymous debut album shows that this group has not quite figured out what they want to be.

Most of the time (the first nine tracks), they are a vocally solid but unexciting vocal jazz group. The light touches of percussion are high hat and shaker ticks and tsks. Standard jazz harmonies abound and are done well enough, but whoever takes top soprano (which seems to rotate from song to song) could soar more lightly to the high notes. The tracks sound top heavy and lack the richness, resonance and depth of tone that can take something from boring to magnificent.

After nine tracks of middling jazz covers, the tenth song bursts onto the scene with repeated requests to shut up. Then someone starts rapping. Someone says "I love you boo". Slickly tracked vocal percussion pounds. Some of the vocals are hopped up on effects. Far from a jazz cover, this is the group's rendition of the Black Eyed Peas' Shut Up. It's not bad, but it is so far removed from what came before that it is incredibly jarring.

This is no jazz take on Shut Up. There is no infusion of jazzy harmonies and swinging style. But with this kind of music the group's lack of low end (membership: 2 guys/3 girls) is less evident. All that is really needed for this kind of cover is a beefed up bass line, percussion and forward placed solo. Everything else is ancillary.

The group follows with Jimi Hendrix's Crosstown Traffic. Psychedelic rock is probably a step closer to jazz than rap-pop, but again, it is wholly incongruous with what came before. The soloist is also no Hendrix. Still, this cover is better than the preceding jazz tracks. The gender mix of the group isn't as obvious to the ear.

Down 4 the Count may be a professed jazz group, but based on this album, they are better at other genres.

Like tight jazz harmonies? Can't get enough of that super high soprano sound? Got the blues? Well, Down 4 the Count's self-titled album might be just the thing for you. There's little question that this group knows how to sing jazz. They do it very well, and as far as I can tell largely without the help of autotune. If you're a fan on the hunt for music, the question is whether or not you like the genre of vocal jazz in general. If you do, you'll probably enjoy Down 4 the Count.

D4TC's greatest strength has to be their arranging talent. Penned exclusively by group members, the arrangements on this album are nicely textured and engaging. They also play pretty well to the strengths of the singers, with one small exception being the soprano lines which occasionally get a little too high and overbearing. I do think that some of that overbearing quality could have been eased a bit with a slightly more sensitive mix in the studio.

The production isn't bad, but it's not wonderful either. I would have appreciated a little less top heaviness, and a little more warmth and clarity to the middle of the sound. Not a big deal, but something I would suggest that the group pay attention to next time around.

Getting back to the positive, it should be noted that good arrangements are nothing without good singers to deliver them. The musicians of Down 4 the Count are all good vocalists who transition easily between solo and background singing. What's more, they all clearly have a good sense of vocal jazz tone and delivery, which lends an authenticity and charm to the album.

Down 4 the Count was formed in fall 2003 when the members were all still in college. That means that the average age of the group is somewhere in their mid-20s, making them still relatively young in the world of vocal jazz performance. Regardless, this album shows a lot of maturity and depth, and I hope that they continue making music together in the years to come. I'm very excited to see how their sound will develop. Down 4 the Count has all the makings of a top-notch international jazz group, provided they keep refining their music.

The singers of Down 4 the Count are capable.

Problematically, nothing on Down 4 The Count thrills or impresses. None of the five singers, sweet-voiced as they may be, have true jazz voices. Their performances come off as flat imitations, and the coy, flirtatious jazz sound of the block feels forced. Songs are all shaped from the same cookie cutter, and it's hard to know where one ends and the next begins if you aren't paying attention. And it's hard to pay attention when the production feel joyless and exhausted.

Arrangers rely heavily on the "ba" and "bum" syllables. The trend is especially noticeable in No More Blues and results in several songs that struggle to change in texture. The burden of dynamic growth seems to have been left to the soprano, whose tone just isn't sweet or subtle enough to blend. The opening song, Down For The Count, suddenly jumps from bland intonation and unsure tuning into loud unpleasantness with the soprano who, while attempting trumpet-like resonance, lands in the vicinity of shrillness. This may be the fault of the sound production, which throughout the album unwisely puts the soprano in the forefront and mixes the bass in a way that distracts rather than supports.

Tuning is wonky, particularly on Whirlybird. Where harmonies lock in tightly, they're beautiful, but these moments of grace are short-lived and feel like accidental miracles.

I believe that a good jazz album can transcend the status of "background music," but Down 4 The Count isn't doing enough to push against that stereotype. I was happy to see Shut Up included on the track list because, while the execution lacks the required energy and sass, the song was surprising, strange, and feisty. Down 4 The Count doesn't need to go pop to spice things up, but their next outing could be greatly improved by some additional study of the music they love so much. By rediscovering the elements of jazz that cause chills and relax the listener without lulling them into sleep, Down 4 The Count can overcome some of the flaws that disappoint on this album.