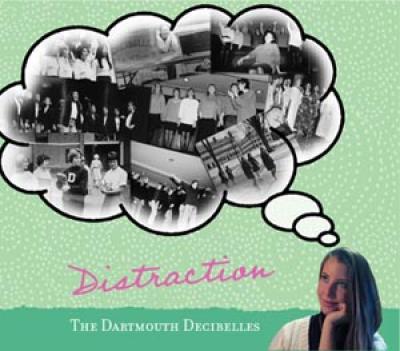 Distraction, the latest release from the Dartmouth Decibelles, is a very pretty album. The Decibelles are ladies with pretty, girly voices who sing in their head voice. In fact, I think this is the first a cappella album I've heard where not one note is belted. Not one note.

While this approach might work with saccharine Kiss Me, it doesn't work so well with tracks like Life is a Highway. The chorus of the latter is a perfect opportunity for some power belting, but the sopranos take the melody line and instead sing it sweetly.

In the end, the soft prettiness of the Decibelles comes across as a lack of energy and intensity. Dulcet voices croon Drops of Jupiter and Chariot the same way they croon Life is a Highway and Everytime We Touch.

The ladies blend well enough and have no problems with pitch. The arrangements are on the whole quite good, but the performances have no fire — not even a spark to start a fire. The soloists are bland, interchangeable, and demonstrate little emotive ability. It is a very high school chorus sound, with sweet girly voices focused solely on singing the right notes.

So while pretty, Distraction is also pretty boring.

The typical arranging pitfalls abound. Too much syllabic nonsense (we have to wait until halfway through the fourth track to get a nice open vowel without mouthy busyness crowding it), worshipping of the bar line (sixty seconds of straight half notes at the end of Chariot), and clichéd endings (the chord at the end of Everytime We Touch, such a fun track, induces physical pain).

The album sounds very good. The production is solid. The percussion hits hard. The voices are in tune and for the most part in sync. All the songs sport a girly, happy vibe. And in eleven of these twelve tracks, there is not a surprising musical or stylistic moment to be found. Breathe provides the exception, with some more creative arranging gestures. Some of the lyrical echoes in the background would be more effective if they fell on lyrics that made more sense to highlight in the context of the meaning of the song, but the break from the pure cover mentality is refreshing nonetheless.

Amidst this greater album cohesion, numerous stylistic issues arise in individual songs, the most egregious and ubiquitous of which is … restraint. Life is a Highway kicks off the album, but the low placement of the key prevents any real belting in the lead or in the backing hook vocals, which in turn leads to balance issues with the top-heavy arrangement. Drops of Jupiter, Chariot, Suddenly I See, and Annie Waits also suffer from inappropriate placement. The leads on these songs clearly enjoy languishing in the bottom range (and hey, I like a sexy low alto voice as much as the next guy), but the engineers fail to clear out enough space in the soprano-centric mixes to make room for them. Further, putting the female leads in a male range nearly always precipitates tragically disappointing climaxes. Most of these songs, but especially Drops of Jupiter and Chariot, beg for an unabashed, fully exposed vocal climax. Instead, we get a restrained, easy transition into an outro vamp.

Backing vocal parts throughout Distraction — harmonies on the lead, echoed lyrics, the "na na" chorus in Drops of Jupiter, etc. — exhibit indefensible restraint as well. The Decibelles fail to convey any urgency, sass, or delicacy through these parts. There is also some disagreement on the swing of Drops of Jupiter and Take the Money and Run. These issues point toward a lack of lyrical and stylistic understandings of the songs.

The album sounds very good. It's happy, in tune, precise, and closes strongly with Everytime We Touch. So if you're looking for passive listening, accessible, sugary, girly a cappella pop covers, then this album is probably meant for you.

The Dartmouth Decibelles aren't bad, but they're not good either. There isn't too much that sounds dreadful here, but Distraction lacks emotion from beginning to end. There's something to be said for consistency, and the Decibelles are consistently average.

For starters all their songs sound the same. They cover Train, Steve Miller Band, Gavin Degraw, Ben Folds, The Eagles, and Crosby, Stills, and Nash to name a few. While these bands could all be considered light rock, they hardly sound the same. Yet, when Take the Money and Run ends and Chariot begins, it sounds like the previous song never ended. This isn't good. I can't decipher one song from the next, one soloist from the previous one, one arrangement from another.

Who's to blame? The arranger, the soloist, the producer, the block, and the music director are all equally to blame here. Not one of them seems to want the spotlight, or rather, demand it. They all seem content enough to do their job at the status quo rate like a factory worker needing the extra hours, slowing to snail's pace. The work gets done and should pass initial inspection, but it doesn't shine.

Distraction lacks emotion. These girls don't sound like they want to be any better than average. They need a leader. They need a vision. They need arrangements that are going to push the boundaries and test their talents. They need soloists who will take ownership over the lyrics they're going to sing. There's too much politeness in the Decibelles' sound. They need a little dirt under their fingernails. A little more grit and determination to win over their audience, and then they might have an album that rises above the blandness that is encapsulated on Distraction.

Checks may be made out to "Dartmouth Decibelles".