Christmas A Cappella: Songs from Around the World (2008) 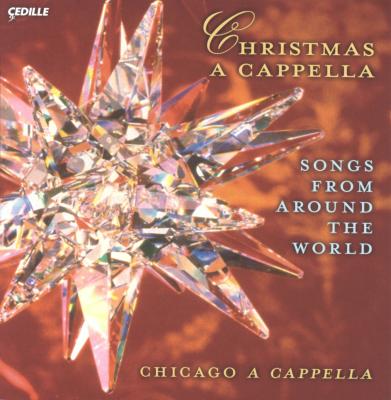 Chicago A Cappella's new Christmas album saves the best for last. The arresting strains of Howard Helvey's O Lux Beatissima are beautiful enough to rise out of whatever background this album is set against. Its slow cadences are newly moving on every listen, the harmonies lush and universally appealing.

That's what a good chamber choir can accomplish, and Chicago A Cappella is one of the best. Besides sounding great, this group provides an invaluable service to the choral world with its showcases of new music, beautifully presented and accessible in sound and stature. Because the performances are so good, a listener is free to listen to the compositions and think, would I want to sing that? Would my group? And would we sound good if we did?

Who Is The Baby? seems like a sure performance winner — classical enough to suit the classical singer, yet soulful enough to win over a tough crowd. The wistful French carols also go over well, even when their medieval melodies are set to distinctly modern harmonies. Noël Nouvelet and Il Est Né, le Divin Enfant are treated well in their new settings, giving the familiar tunes a new and striking airing. The album opener, Amuworo ayi otu nwa is also successful in this group's high classical style.

In general, the performances are impeccable. I had my quibbles — I thought they pushed the tempo too much in the middle section of Gwyneth Walker's otherwise lovely The Christ-child's Lullaby, and I found the I Wonder as I Wander soprano soloist to be too bright. Overall, however, the women singers showed a marvelous range of color, shifting their tone and vibrato from piece to piece. I wish the tenors had a similar range. While excellent, their sound seemed to come in only one shade, which can best be described as "heroic". Overall, the ensemble had a marvelous blend that captured this repertoire's range, as well as the best qualities of small group and larger ensemble singing.

Christmas A Cappella: Songs from Around the World has a lot to offer, and it just gets better with repeated listenings. Choral directors everywhere should order this album immediately, and the rest of you might enjoy it too.

Christmas A Cappella: Songs from Around the World is the latest release from Chicago A Cappella, a nine-person ensemble based in, you guessed it, Chicago. This classical group's Christmas album is anything but traditional, at least as far as repertoire is concerned.

Seven of the eighteen tracks are "world premiere" recordings, and even familiar tunes such as O Come, O Come Emmanuel and Jingle Bells are uniquely presented with rhythmic and melodic variations.

With songs in Hebrew, Igbo (Nigeria), French, Danish, Luo (Kenya), and English, Chicago A Cappella represents much of the world, but not all of it. We have Africa and Europe, but no Asia and no South America.

The extensive liner notes provide interesting tidbits about the pieces and their distinguished composers and arrangers, as well as translations for the foreign lyrics, but the information is uneven. While the notes state that most of the songs are from the last 20 years, they do not provide the composition year for each piece, which would have been nice to know.

The album was recorded over six days at Bond Chapel at the University of Chicago, and it sounds like it was recorded in single takes around a few room mikes. It is a testament to the skill of Chicago A Cappella to record what is essentially a live album and to do it so well. But there are some moments where one voice part overpowers the others, and this could have been fixed with some light mixing. There are volume issues as well — like Akafist, this is another classical a cappella CD where I have to listen at double my normal setting.

I just wish they had spent a little less on the (incredibly informative) 32-page CD booklet and a little more on studio time.

Christmas A Cappella: Songs from Around the World reminded me of a cappella Christmas albums I have by the Cambridge Singers, the King's Singers, and the Dale Warland Singers. I'd put Chicago A Cappella just a notch below those three groups — but even to be mentioned in the same breath with those groups is impressive. The nine member Chicago A Cappella is closest in size to the King's Singers (six voices), but stylistically — the sound, the arrangements, the production — they seem much closer to the Cambridge Singers (30 voices). Any of the songs on this album would be appropriate for singing by a 30-member group.

The album, as you would guess from the title, takes Christmas songs from various countries around the world, and presents them (in nearly all cases) in their original languages. I believe only 8 of the 18 songs were in English. I quite liked the concept; this is a very interesting collection of Christmas songs. I've got a pretty broad choral background, and I was only familiar with seven of the tracks. Most of the time presenting the songs in their original languages worked fabulously, but I do have to admit the Danish spoken part in "En stjerne er sat" sounded just plain weird to me.

I give a lot of credit to the talented singers for being able to pull something like this off. The singers tend to be at their best when taking special care to blend together; O Lux Beatissima is a prime example of this: a quiet, still piece that made me want to listen to it over and over again.

The worst parts of the album occur when soloists stick out from the overall blend. The soprano is the worst offender in this regard, sounding at times as if she wants to steal the spotlight from the other group members. I very much disagree with her interpretation of I Wonder as I Wander. This song should be plaintive, not imposing. The soprano is unfortunately very much "in your face" here, with too much volume and too much vibrato. Her overbearing presence also detracted substantially from the ending of Hodie and (to a lesser extent) Who Is The Baby?. The baritone soloist was also too prominent on that song.

My other complaints about the album have to do with some of the arrangements. What Sweeter Music is boring and repetitive, without a compelling melody. I couldn't wait for the song to end. I also really dislike the arrangement of O Come, O Come Emmanuel. It uses a non-traditional variation of the traditional melody, with a lot of strange harmonies. I'm OK with strangeness, as long as it serves a purpose and adds something to the song; in this case I thought it did neither. Similarly, Jingle A Cappella puts a strange twist on the traditional Jingle Bells melody, with a mostly-chromatic ascending scale motif on "one horse open sleigh" that is repeated with slight variations throughout the song. By the end I was bored with it.

Those complaints notwithstanding, make no mistake: this is a very, very good album, with very, very good singing. Many of the songs are downright exuberant. The rousing, joyful version of Amuworo ayi otu nwa made me want to sing along — which I would have done if I had known the (Nigerian) words. Yo Lisa Goy gets impressively loud without getting out of tune. Il est Né, le Divin Enfant (the familiar "He is born, the divine Christ child" when it's sung in English) features a nice mixture of fast, slow, quiet, loud, and even whistled verses. Yes, you read that right.

To conclude, if you are a fan of the three groups I mentioned at the start of this review, and if an eclectic collection of Christmas carols sounds attractive to you, this is a "can't miss" album.