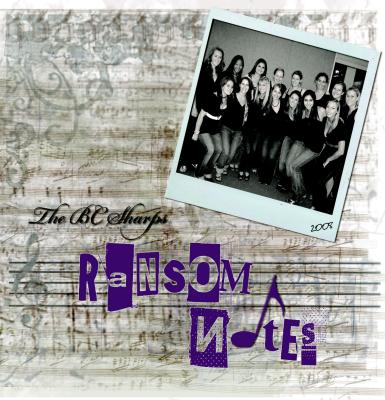 Ransom Notes is so far behind the a cappella learning curve that comparing this album to the a cappella of today is like comparing Off the Beat and The King's Singers. Ransom Notes is a throwback, not to the early days of a cappella, but to the days of its rapid expansion, when small colleges all across the country were throwing together groups while they still had novelty on their side.

RARB asks its reviewers to compare every album to all others they've ever heard. There are so many technical problems with this album that it simply does not compare to what standard a cappella has become: polished, clean, slickly produced with no incorrect pitches or late cutoffs permitted. I can only compare Ransom Notes to the earliest all-female a cappella. Like many of those albums, Ransom Notes features awful intonation, irreconciliable blend, ragged phrasing, sibilant and lispy vp, strange solo performances, and elementary arrangements. The album's only redeeming quality is that most soloists sing whole-heartedly.

The most critical flaw is that, at least on Ransom Notes, two BC Sharps simply can't sing the same pitch at the same time. As the Sharps come to consensus on a note, their pitch often sinks. Some notes hold, but small pitch inaccuracies cause tonal rubbing, especially in the sopranos. The Sharps must split into sections and drill until each section member can match the pitch of every other section member.

Once they agree on their notes, the Sharps must also drill to blend. Each rehearsal should begin with pure vowel exercises. Sing a tone until it rings. Next comes down-the-line tone matching, like that old "telephone" ice-breaker exercise, but where single singers are asked to recreate the tone of the singer before them. The music director must insist on learning pitches on a neutral syllable before directing the group on how to sing the specific vowel sounds of each song.

The Sharps spread chords too far. You can't sound good when you're struggling to sing what's on the page. Sopranos are asked to plink out high notes quickly, but instead they chip them or slide around them (Feels Like Today). The altos muck around in the same sonic space as a "doom"-style vp kick drum, but neither part is run through an effects board and so they are indistinguishable. The Sharps should arrange in a voice range that is not only singable, but comfortably so. Currently, the Sharps sound strained.

Aside from the album's lack of production value, its most telltale sign of outdatedness is its use of old school syllables that clash. Piece of Me features some "doh doh doh"s against some "bup bup bup"s and Wild Night faces off "bow wow wah nah nah wow" against "doh doh doh". These syllables don't complement each other in any way. Their trailers are opposites: "oh" vs. "up". Their leading edges are at odds: "w" vs "d". Their tones fight, too: "ow" vs. "oh". One way the Sharps could improve their blend is simply by choosing syllables that get along.

Finally, it's time to hire a modern day producer. Despite the tendency to machine albums that sound alike, the Sharps need to join the digital age. Octavize the altos so they can sing more comfortably and focus on syllable shaping instead of hitting the notes. Intonate the sopranos so they can focus on matching tone. Extract the vp away from the vocal spectrum with thumpy kicks, snappy snares, and crispy hats. Force backing vocals to sing in the background, both through muted syllable tones and by mixing with deeper layering. Hire someone who is familiar with today's a cappella so they know what to highlight and what to hide.

Ransom Notes is a yearbook album dated 1996. With an enormous tracklist recycled from the a cappella backstock and an outdated arranging style, Ransom Notes reminds me very much of a cappella from the mid-'90s. Most of the songs feel like warmed-over versions of legacy arrangements from a long gone generation of Sharps. Every hardworking a cappella group deserves a yearbook album, but only friends and family should have to listen to it. To earn listeners outside this cozy group, the BC Sharps need to burn the old arrangements, listen to some recent a cappella, and completely reinvent themselves.

To a cappella fans: with Ransom Notes, the Boston College Sharps haven't given us an album to which anyone will particularly want to listen. That's my review. Now go away.

To the group's members, I offer the following ten pieces of advice for your next recording endeavor.

Your friendly a cappella review guy

I normally write my reviews with a prospective buyer in mind. Let me instead direct the bulk of this review to the group members, after simply telling prospective buyers that no, you probably don't want to buy this one.

To the group members:

The single most serious flaw of this album is the intonation. I rated most of the songs a 1 or a 2 for this reason alone: the pitch issues unfortunately make these songs unpleasant to listen to. This needs to be dramatically improved. Somewhat unusually, the pitch tends to be a bigger problem for the soloists than for the background vocals.

One thing that would likely help is if the soloists would do less vibrato and other vocal effects. Here's a list of some specific examples. In Criminal, the vibrato sounds very affected and forced. In Total Eclipse of the Heart, the "...I was falling in lo-ee-ove" at 1:23 and later at 2:58 goes flat; the same is true of the "...of the hear-ee-art" at 1:32 and later at 3:07. In Chain of Fools, the separation of "chai-hee-yay-hee-yain" at about 0:12 detracts substantially from the melody. Unfortunately other examples abound, too many to keep listing. If embellishments are not handled just right, they make the already questionable tuning even worse. To the soloists: try to sing more naturally, less like you're trying to be pop stars.

Another thing that can be improved is picking pieces to match the soloists' ranges, or picking the soloists to match the pieces' ranges. In For the Longest Time, the first few notes of the line "If you said goodbye..." are below the soloist's normal range and consequently have a very different and distracting tonal quality compared to the rest of the song. There are a few songs where the top notes go flat and make me wonder if they are just out of the range of the soloist.

The background parts periodically also have intonation issues. Some examples of these are the first "Turn around..." lyrics of Total Eclipse of the Heart and in the "na-na-na-na" section of Up All Night (2:20-2:30).

Another thing that could help a lot is higher quality production. Parts of this album sound like they were recorded with a microphone hooked up to a laptop in someone's dorm room. In addition to helping with reverb/atmosphere, a good producer could probably also have helped substantially with the intonation problems.

A less critical issue, but one that can probably be fixed without too much difficulty, is dynamic contrast. Contrast is generally a good thing, but there are three specific places that stand out to me negatively. In For the Longest Time, some of the chords seem jarring because they get louder very abruptly. Hide and Seek's "insensitivity" word at about 2:10 is also jarring. On the other end of the spectrum, the abrupt quieting in Torn at 1:19 is equally disconcerting. When getting quieter, don't make it seem like the bottom just drops out of the music.

There are a few times when it sounds like you need to do a better job of staying together. The beginning section of Hide and Seek is one such: it sounds like many people are entering and cutting off at very different times. This is also a very noticeable problem in Torn.

Some good news: aside from Lullaby which has a bass line that annoys me, I think most of your arrangements are pretty good. Kudos to the Sharps for arranging their own stuff.

BC Sharps, I wish you luck in making the changes mentioned in this review. I think that they will substantially improve future recordings.