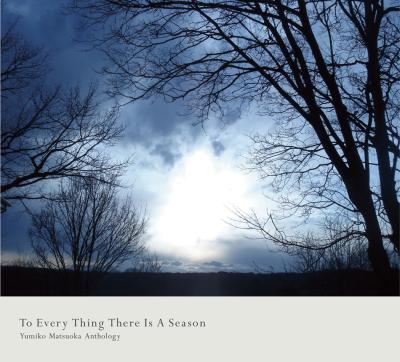 Everything about this album screams "recital": the moody, wintry sunset photo on the album art, the sensitive portrait of the artist at window side, the artist seated reverently while reviewing some sheet music inside a darkened church. The eclectic tracklist seems to confirm the anthology as recital. I expected to be blown away or sit through and applaud politely.

But first, I was confused. Three of the tracks are classical guitar recordings. The remaining a cappella tracks are modern choral arrangements of an arbitrary assortment of songs, from a Scottish traditional song to Billy Joel. At first glance, this album has no discernible thread; anthologies are not something RARB is accustomed to receiving.

So I'll lay it out: an anthology is a collection of writings, not necessarily by one person, and this album is subtitled Yumiko Matsuoka Anthology. The title and cover art led me to believe that Matsuoka wrote all these songs or their arrangements. The liner notes are similarly confusing. Bob Dylan's Blowin' In The Wind, for example, is cited like this: Blowin' In The Wind (Bob Dylan) Written for Christopher Kendall and the 21st Century Consort, Washington, D.C., 2004". Okay, obviously Matsuoka didn't write the music and lyrics of Blowin' In The Wind. She arranged this version.

In fact, Matsuoka wrote three songs on the album: Tsubasa (Wings), Brett (I think), andTo Every Thing There Is A Season, which features Biblical text for lyrics. While the technical definition of "anthology" could equally apply to any college a cappella album, the usage here combined with the album art and the quizzical liner credits left me feeling uneasy and confused. It's helpful to understand the context of what you're hearing, if only to help you hear it.

Even more strange, I'm not certain Yumiko performs on the album. Three tracks list groups "with Yumiko", a la "Performed by the Western Wind, with Yumiko". I assume this means she sang.

Aside from confusing me, To Every Thing There Is A Season reminds me of my choral college days or of ceremonial dedications performed by choirs, which is to say that these recording don't blow me away. The arrangements are typical of the modern choral genre. They're dissonant and incorporate unison solo lines over open syllable backgrounds.

Blowin' In The Wind begins like a romance movie soundtrack, sounding like a free spirited, Central Park-in-autumn montage, with an engaging and perky string ensemble. The soloist quickly reduces it to pretension, singing with a pop music theater style and silly vowels ("blowin' in the weeeeend"). Bob Dylan this ain't. The soloist on And So It Goes has a light, warm tone, but he sounds like he's trying a little too hard to sing in choral style.

Scarborough Fair pits unison solos against a mind-bending tour of chord progressions. I heard the traditional interpretation of the song, something jazzy, something uber-dissonant, and some (surprising) consonances. This arrangement is likely fascinating to people who understand its technicalities, but I found it jumbled.

Eleanor Rigby, one of my favorite Beatles songs, is rendered spineless. The arrangement is full of holes, open spaces where no one is singing and driving the song forward. Instead of building angst and desperation, this song feels forced.

It's simplicity that appealed to me on Both Sides Now. The arrangement opens with closely miked female "doo" arpeggios over a male "doo" foundation. The soprano soloist sounds genuine and pretty. Her open tone and relaxed vibrato capture some of Joni Mitchell's spirit. The song finishes on a satisfying, warm, dissonant chord. (Someday, I want to hear a punk or grunge arrangement.)

Some people, like commencement ceremony planners and inauguration booking agents, love the modern choral style because they interpret it as legitimate, emotional, and unassailable. I'm one critic who would prefer a more authentic performance than this album. If you're not sure what I mean, check out Stuff White People Like's post "#108: Appearing to Enjoy Classical Music". I sat through and applauded politely.

A collection of mostly well-known songs, Yumiko Matsuoka's anthology To Every Thing There Is A Season is commendable, carefully created, and extremely relaxing. It's also a double album of sorts, as the listener is able to consider and appreciate two different aspects: Matsuoka's creative reinterpretations of classics, and the incredible ensemble of musicians she tapped to pull off her vision.

First, loud praises go to Matsuoka for her keen songwriting abilities which transform our previous encounters with legends like Billy Joel, Bob Dylan, John Lennon, Paul McCartney, and Joni Mitchell, into memorable new experiences. Of the recorded repertoire, perhaps most notable is Blowin' In The Wind, which Matsuoka crafts with an audible bend toward happiness. She also uses a surprising line-up for the piece's delivery. In addition to the lead vocal soloist, Matsuoka's Blowin' In The Wind features a peppy ensemble of violin, viola, cello, and clarinet. The acoustic guitar pieces also stand out on To Every Thing There Is A Season, this time for their elegance.

Since our reviews at RARB are for the cappella crowd, I'd be remiss to not highlight purely a cappella Scarborough Fair, which may stand as the most interesting arrangement possible for this time-honored song without losing its original flavor. Matsuoka's risk-taking is transparent and well-received throughout To Every Thing There Is A Season. Listening to her anthology is rather like reading a familiar fairy tale, but this time, the breadcrumb trail leads us a new direction, the rabbit hole has new wonders.

And of course, the world-class professional musicians featured on this album only add to Matsuoka's overall impact. Of particular talent are nimble Tom Young and Erik Ringstad on guitar, Tom Baskett's breathtaking voice, and hauntingly sweet soprano Aubrey Logan. The sheer number of musicians appearing on To Every Thing There Is A Season is a feat; to have a collection of this size with the breadth of talent demonstrated is very remarkable.

This is the perfect album for unwinding after a long day. But it's also a celebration of Yumiko Matsuoka's fine talents, featuring timeless music you'll love listening to again and again.

I think the most pertinent question when listening to this collection is "Who is Yumiko Matsuoka"? I would say that Matsuoka is a reasonably talented composer and arranger with a flair for the unexpected. Her arrangements in particular flaunt expectation whether by altering the original feel of the song dramatically or by challenging the listener with unexpected harmonies. Depending on your preferences you may love or hate her approach, but there's no denying Matsuoka's deliberate method of song craft.

In the scheme of modern a cappella I would group Matsuoka's overall aesthetic in with the King's Singers or Chanticleer; that is to say, relatively straightforward and choral in nature. Classic a cappella syllables abound ("doo" "doh" "dah"), and the vibe of each piece is very traditional. Though she likes to mix things up harmonically, nothing here will break new group for anyone familiar with the sounds of contemporary a cappella.

For that reason, and because of sound quality issues that I address below, I personally enjoyed the instrumental compositions and arrangements on this album a bit more than those that were a cappella. Tsubasa (Wings), Brett, and Georgia On My Mind are gorgeous works for acoustic guitar, each employing a wide palette of harmonic tones and timbres. Each succeeds in creating an enjoyably distinct mood and character.

The biggest downfall of this collection is definitely the performances of most of the a cappella works. Four different groups of singers participate in this recording, and the difference in quality between each group is staggering. Some demonstrate good ensemble blend and intonation, like Syncopation, who give a gorgeous performance of Joni Mitchell's Both Sides Now. The others, however, are quite rough around the edges. The majority of the songs feature bass sections that can't quite match vowels with the upper voices. Many phrases throughout the album feel awkward, and there are numerous moments where individual voices stick out from the texture of the ensemble.

My guess is that these inconsistencies are a result of mixed levels of preparation. Some of the groups sound clearly more polished than others. I would strongly suggest to Ms. Matsuoka that she consider auditioning her own choir to record future works. Her work displays talent, but the majority of the performances she has chosen to showcase don't do her justice.