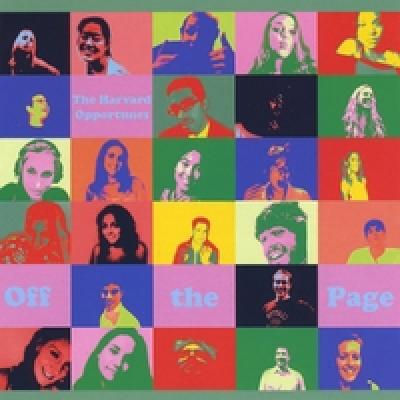 Off the Page, from the Harvard Opportunes, shows solid musicality and a strong sense of growth from the group's previous release, Let it Play. Yet several factors, most notably blend, still hold the group back from reaching the upper echelons of collegiate a cappella. The Opportunes have a great synergy of arrangements, singing, and production. The arrangements are simple but solid, utilizing tried and true syllables, rhythms, and harmonization. While such classic part writing has the potential to sound stale, the singing is so strong that the album rarely gets boring. Especially notable is the singers' obvious enthusiasm. Rare is the collegiate group that actually sounds like it is actually having fun on a studio album. Add in mostly solid, light-handed production that focuses on letting the voices do the work, and you have a winning combination. Execution is solid, and the result sounds effortless (which is truly a testament to how much work has gone into this album).

Vastly improved soloists are a big win for the Opportunes. Whereas Let it Play featured leads that were uncomfortable to listen to, Off the Page has excellent solo work across the board. The sultry work on Save Tonight is much better than the annoying original, the attitude on The Long Way Around is perfect, and even Usher gets a run for his money on U Remind Me.

Yet the jewel of Off the Page is clearly Heart of the Matter. Molly Swenson delivers an unbelievable performance: beautiful, lush, showy without too much bravado, dead-on emotion, and a compelling sense of momentum. Swenson shows mastery of her instrument, and delivers the best solo I've heard in a while. It helps that she's backed by an outstanding arrangement and nuanced block singing. What a track!

The Opportunes still have some room for improvement. Most notably, the group still has a weak, top-heavy blend. While they've upped the bass some, tenors and baris rarely come through in the block, leaving a hole in the texture where the sound could be fuller. The singing is still unnaturally bright and sparkly, which occasionally sounds immature and thins the texture. We Built This City is a prime example: the song has plenty of energy, but it feels artificial and gimmicky.

The Opportunes also have some questionable musical choices. Let the Music Play is a prime example. This behemoth mega-medley is an exact replica of the medley on Let it Play, only updated with the latest vapid Top 40 material; it even has the same title! While I can appreciate not wanting to sing an entire three minutes of My Humps or The Lonely Island, listening to this much-too-long muck of constantly changing, random songs was decidedly more of a chore than a treat. The ridiculous "hidden" track also ruins the mood on an otherwise well-polished album and left me with a bad taste in my ear.

Nevertheless, Off the Page sets a high bar for the Opportunes, and shows a marked improvement for the group, especially regarding the soloists. And it's worth the price of admission for Heart of the Matter alone.

Somewhere between their last release and their latest, the Harvard Opportunes found some guts. Some energetic, in your face, big nasty vocal percussion, dramatically improved solo guts. Off the Page is a huge improvement over past efforts, which is an accomplishment that I hope the group is proud of. What's the next step toward perfection? Consistency and style.

The Opportunes have definitely earned some more praise. Whereas Let it Play was light pop fun, Off the Page hums along with moments of genuine energy and artistry. Solos are much improved overall, with the women outshining the men through more emphatic and graceful delivery. The vocal percussion is very well done, adding an extra dimension of power and support underneath what are already energetic backgrounds. Indeed, this is an album that demanded my attention more than once, which is becoming less and less common as production value becomes a substitute for good singing.

Though Off the Page caught my ear, I didn't find myself engaged throughout. That's where consistency becomes an issue. This album definitely hits a lull around track six with Heart of the Matter, and the slump doesn't really let up until track nine when the energy of The Long Way Around gets the listener back on track. The best songs are upfront, which is good track planning, but there is definitely a disparity between the more exciting tracks and the ones that add little to the album.

Arranging is a big factor here. Six group members contribute thirteen tracks, and while nothing is bad, most are more functional than interesting. We Built This City is well crafted, utilizing some nice layers and phrasing, but lacks style that would have set it apart from other a cappella versions. Most of these songs are interpretations we've heard before. Overall the large talent pool bodes well for the group, but the group would do well to further refine arrangements for the studio. Coupled with this newfound energy, more moments of originality and creativity could really catapult the Opportunes to the top.

One more bone to pick. Just like its predecessor, this album has an 8' 18" medley of completely random pop music called Let it Play. The songs featured have no discernible connection to one another (except that they have all been popular on the radio at some point in time) and they are not strung together in a way that makes them at all cohesive or interesting to listen to. My guess is that including this track is an Opportunes tradition. While I am all for tradition, I have to say that this track adds nothing at all to the overall album. It's long, random, and not very enjoyable. My advice to the group is that if they really feel strongly about continuing the medley madness, they should strongly consider making Let it Play a final bonus or hidden track so that it doesn't disrupt the flow of an otherwise great album.

Overall, Off the Page is an exciting step forward for the Opportunes. I'm looking forward to future accomplishments as they continue to refine their talents and arrangements.

Off the Page shows an a cappella group that's pretty good: a group with good pitch, good blend, and a repertoire that's got a little something for everyone (contemporary pop, country, R&B, classic rock, and indie pop).

The tracks that are most effective here are the ones where the group has done just a little something that turns a good song into a great one. Many times, it really is just the little things that make for compelling arrangements: changing the background parts on the final chorus of Something Like That so it doesn't sound too repetitive, not cluttering the arrangement of Heart of the Matter so that Molly Swenson's beautiful solo voice can shine through, and using subtle auxiliary parts on When You Say Nothing At All to add textures to an otherwise mellow song without overwhelming it.

There are some uneven moments that prevent this album from being truly great: the distracting breathiness of the solo on On the Way Down, the unbalanced, treble-heavy mix of Hide and Seek and Unwritten, and the abrupt backing parts on Save Tonight, which just sound sloppy. On an album that's otherwise very solid, such inconsistencies are a bit surprising.

The album builds to and climaxes with Let the Music Play, a nearly nine-minute medley of current top 40 hits woven together with snippets of Shannon's 1983 hit of that name. The idea is clever, but a concept that complex really needs to be executed flawlessly from start to finish, and the 'Tunes just don't quite make it. Most of their transitions between segments are really choppy, like they just flipped a switch to jump from one song to the next (the one notable exception: a verse of Let the Music Play builds nicely into the Pussycat Dolls' Don't Cha). Some songs just don't translate well to a cappella (Fergie's Fergalicious), some go on just a little bit too long (Justin Timberlake's SexyBack), and some are layered so intricately with Let the Music Play that it's hard to tell where to focus (Fergie's London Bridge, Sean Paul's We Be Burnin').

That said, there are several inclusions in the medley that could have been developed into full songs, such as Don't Cha, Beyonce's Irreplaceable, and Fall Out Boy's Sugar, We're Goin Down. Tucking all these current songs into a medley is an interesting choice for a contemporary college group, especially one that has, according to its web site, released an album with a new selection of songs every other year since at least 1993.

The strongest parts of Let the Music Play are also the moments where the group has the most edge, the most energy, and the most innovation. It'd be interesting to see where the group would land if it developed that passion and creativity into a full album; until then, Off the Page is a solid collection of safe bets: a few really great moments, a few disappointments, but overall mostly good.

To order this album visit iTunes.com or, for a hardcopy, CDBaby.com.