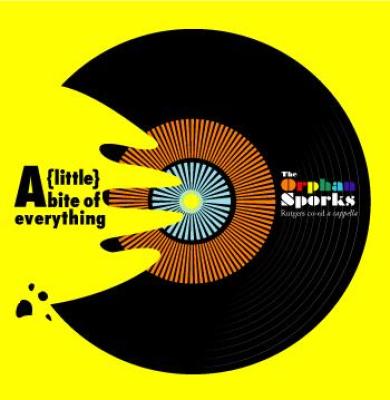 The OrphanSporks step forward as entertainers on A Little Bite of Everything. From the ridiculous intro and outro to the heavy breathing percussion lines, this group offers itself as a comedy group that sings well, or at the very least a singing group that recognizes the inherent ridiculous side of the a cappella art form.

St. Teresa and Volcano strike me as the musical high points of the album, once the silliness has worked itself out. Aaron Boykin sounds terrific on the Damien Rice tune, as he does on Lonely No More earlier on, and Devon Gant and the rest of the group keep the intensity going throughout the song. On St. Teresa, Daniel Portilla's arrangement is the biggest winner, successfully wresting the song away from the many St. Teresas that went before. Soloist Meg Algeo sounds great and the song keeps rhythm all the way through as it follows a very effective dramatic arc. From there, The OrphanSporks wisely pull out their rap tune, rocking the house with Get By. The energy and solo lines are terrific, even if the overall song doesn't have the cohesion of the prior two tracks.

Most of the rest of the disc is more sing-y, and thankfully presented with a smile. Sometimes the sopranos stick out, or the men blur, or both, and the overall sound escapes the easy-repeated-listening zone. Still, even though I won't be listening to this album again and again, I appreciated its spirit.

This group is here to put on a show, and they do. And it's good.

The OrphanSporks have all the basics covered and deserve their spot on the CARA shortlist for mixed collegiate album. In fact, having listened to all of the nominated albums, I think they deserved a nomination. In a collegiate field where technology has all but eliminated rhythm or pitch mistakes, however, it is sometimes hard to say which album is "better" than another.

We must turn to other metrics of judgment, some more easily explained (arrangements, soloists) and others less so (the X factor). Unfortunately, such metrics are often a matter of taste and are not as quantifiable as pitch or rhythm.

For me, the problem with A Little Bite of Everything is that it is boring. There is a decided lack of creativity, starting with song choice. The OrphanSporks cover a variety of pop artists but stick to the been there, done that songs. Wonderful for audiences, but not so much for the ears tired of listening to covers of Suddenly.

Their production has an a cappella purist sensibility, which is refreshing. I can hear the distinct voice parts, yet they blend together to make a pleasing whole. Being able to hear their arrangements, though, makes it clear that those arrangements are solid, but basic. The soloists are also solid, but basic.

Don't get me wrong. This album would be far from bland to ears which haven't listened to hundreds of hours of collegiate a cappella. A Little Bite of Everything just lacks the intangible X factor. None of the songs give me that tingle of excitement over what I am hearing. It is journeymen's work for sure, but not that of master craftsmen.

Above average, but rough around the edges, The Orphansporks' A Little Bite of Everything falls in a gray area difficult to rate within the confines of the RARB scoring system. This album is a great example of what might be considered a "high three" or "low four". Chalk that up to the current state of recorded a cappella, in which a polished, professional product has increasingly become the norm. The Sporks deliver a strong, energetic, well produced sound, but little else to distinguish them from the rest of the pack.

One area in which this album does deliver is energy. The Sporks have it to spare, and it saves otherwise lackluster tracks from being flat out boring. A good example is Take Me Home Tonight, which is missing interest in the arrangement that could have made it a much more engaging song. The energy pulsing from the group kept my attention long after I had lost interest in what they were actually singing.

Most of the soloists are strong as well, mostly feeding off the background energy and channeling it into emphatic deliveries. As he was on Casual Harmony's previous album, Aaron Boykin is again a standout, though sadly he isn't allowed to show off on anything quite as vocally pyrotechnic as his CARA winning I've Got To Use My Imagination.

Mechanically, the weak point of this album is definitely the bass section. Unlike the upper voices, they sound as though they are getting carried away in the energy and sacrificing ease and resonance for a forced delivery. Sometimes out of tune, and often overbearing, the low men of team Spork have some work to do to provide a cleaner foundation for the rest of their team.

The good news for this group, is that the one thing you can't fake in the studio is energy. Since the Sporks have that down, now it's just a matter of focusing that energy on more interesting and original material. If this group can up the ante on arrangements and pick some less overdone repertoire, they may just have what it takes to score big next time around.

To order this album, email your address to the group.