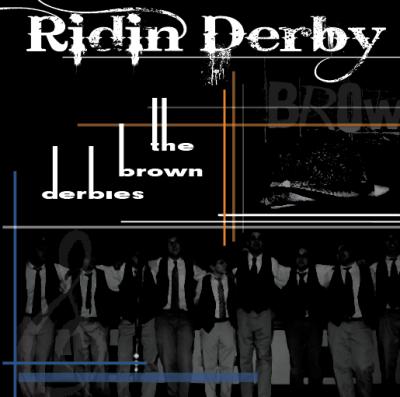 I can anticipate your first thought. The famed Brown Derbies, who have given us such a rich canon of a cappella music, getting a "1"? Alas, a typo it is not. Ridin' Derby is one of the worst a cappella albums I've heard in a while.

For beginners, Ridin' Derby is just plain boring. Arrangements typically feature an uninteresting bass line with an incohesive jumble of "jinn"s, "ro"s, "nah"s, and annoying nasal syllables on top. They are repetitive both within songs and across the entire album, with each uninteresting measure blending into the next. Dynamics and musical contrast are non-existent, except when the Derbies decide to constantly vacillate between loud and soft over multiple measures, sounding like cars passing on the freeway (as in Golden). Singers lack energy and finesse. Even percussion never manages to push the album along.

Production is also awful: you can't even hear the singing clearly. The bass line is booming, unfocused and gooey. Upper voices are soupy and often indistinguishable, sounding compressed and timid. Voices stick out all over the place, but solo lines rarely protrude enough from the mix. I can understand going for an organic feel (which Ridin' Derby certainly is), but at least get the reproduction right.

But what really sets Ridin' Derby apart is the poor quality of the singing and musicianship. These days decent tuning is table stakes for a cappella albums, and the Derbies very rarely manage to sound in tune for more than two or three consecutive notes. This is not surprising considering the poor vocal technique: unsupported, breathy, swoopy, with no sense of blend or ensemble. These men sound whiny and petulant whether singing lead or block.

There is little redeeming about Ridin' Derby. It features the triumvirate of a cappella missteps: poor singing, low energy/excitement, and subpar production. This album is a struggle to listen through. This is especially disappointing from a group like the Derbies, who have made such excellent music in the past. I hope they can turn it around in the future, but they have a long way to go.

Remember Hope of Deliverance, Paul McCartney's first single of the 1990s? The video featured the former Beatle dorking out with aging mandolin players in the middle of the forest. The single was, famously, a commercial failure, but an adult contemporary hit, leaving everyone to wonder what happened to the former arbiter of cool.

Enter Ridin' Derby, the somnolent, semi-eponymous release from the Brown Derbies. The Derbies were never the Beatles, but they were once responsible for a cover of In the House of Stone and Light, one of the most engaging and forward thinking a cappella tracks of the 1990s. I bring that up because Ridin' Derby has all the energy and verve of a delivery van.

The album kicks off with the most straight-laced Justin Timberlake cover I have ever heard. What Goes Around gives us a lethargically sung opening line, soaked in so much reverb it sounds like it's coming from some faraway hallway, as though the singers never intended us to hear it. Soloist Mike Hammond has all the notes, but is that really the point when you're singing Justin?

This sets the stage for an ad hoc coalition of well-worn material (Semi-Charmed Life makes an appearance for some reason) and contemporary covers (Way Away), with a cheesy gag track and yet another Timberlake evocation (viz. 'N Sync). It's tough to craft a cohesive album out of such disparate elements, and the Derbies haven't done so.

It takes some measure of vision to pull off Take Your Momma, but when the track is stuck between a milquetoast rendition of Bridge Over Troubled Water and a curious parody of the Duck Tales theme, the vision becomes blurry. As it happens, the tracks suffers from rough tuning, a poorly matched soloist, and a careless, "ba-da" heavy arrangement.

The group doesn't fair any better with a cappella standards. Faith lines up a hokey, block-chord arrangement with a soloist who doesn't enunciate. Don Flynn hopes you reconthider nis fooish notion mevore nis river bengomes nocean. Oh, and the backgrounds start arbitrarily announcing the names of inexpensive pasta meals. Hence the '08 in the liner notes, I guess.

The production doesn't do anyone any favors. Solos are lost in a sea of baritone bland. There is no bass (though there are two basses). Everyone sounds like he is singing directly into carpeted walls, even when coated in reverb. That's hard to do. This is about the only group I have heard that has taken a step back in production quality over the last decade.

What's weird is that the liner notes feature pictures of these guys doing cool stuff like hanging off cliffs and visiting monuments. If being a Derby means they get to do all that stuff, then good on 'em. But they didn't do their alumni proud here.

The Brown Derbies have created an excellent album. Driving arrangements with lush, full-bodied chords are just the starting point of what makes this an album worth owning. The Brown Derbies have captured the collegiate charm that made this genre so popular in the early '90s. And why should I be surprised as they are one of the groups that helped shape collegiate a cappella's road. It's not a straight perfect "5" album, due to some production mishaps, some tuning problems, and some naiveté in how to properly shape vowels in the block (too much American "r" and diphthongs throughout), but oh is this album fun to listen to.

The album's opener, Timberlake's What Goes Around almost ruined the experience of this album for me. There's not a whole lot wrong with it, other than it mirrors the status quo of current collegiate a cappella: un-enthused soloist and plodding backing voices, but thankfully the drone of current trends don't last long as we're followed up with the tried and true Semi-Charmed Life. The syllables and coinciding rhythm are just plain fun to listen to, and Zack Langway's lazy summer tenor is a perfect fit for this track. This is followed up with a passionate Golden by Fall Out Boy that creates a nice landscape and a celestial mood. Next up, Beck's Sexx Laws and you have three completely different styles within three tracks that show these guys are for real.

After that click over to track nine and listen to the youthful exuberance of David Leipziger's take on the Talking Heads Road to Nowhere. The block supports his enthusiasm, matching him step for step. How can you not like these guys?

Do I hear dynamic changes on The Barenaked Ladies It's All Been Done? My ears must be deceiving me — dynamics without the help of a computer! Wow! Incredible! Thanks for sharing some musicality. I'd probably heard ten different versions of this over the years, but only now have heard it done right.

Soloists Matthew Garza and Hadley Hornig's interpretation of Stevie Wonder's True To Your Heart is uplifting, but it's only one bright spot on an album full of outstanding music. Bridge Over Troubled Water is breathtaking. I wish I could say more, but it needs to be heard, plain and simple. The Derbies capture the essence of a live performance perfectly on this track.

There are some production issues to take notice of, like the basses being too present in the mix on Tearin' Up My Heart and a few other small moments. But I really appreciate being able to clearly hear all the backing vocals, with the soloist only slightly more prominent in the mix, so the production comes out more ahead than behind on this album.

Some may harp on the tuning issues on this album and how these guys should have utilized auto-tune and other studio wizardry to clean it up. Personally, I admire their honest sound and applaud them for saying to their audience, "Hey, this is who we are, take it or leave it." We are so used to hearing everything perfectly in tune these days that when one chord (or God forbid an entire album) is slightly out of tune, our ears scream bloody murder. Yes, it is true, that if the Brown Derbies used some more studio tricks the album would be more in tune, and some may say more enjoyable to listen to. As someone who grew up admiring the energy and creativity of arranging college groups used to have, I have to set that problem aside as I take in a sound that most groups don't have (and just don't understand) anymore. Call me old-fashioned if you must.

Arrangements are stellar, and it's not something you're going to notice upon first listening. I've always said great arranging is the kind you don't notice because everything sounds so easy and seamless. Mostly, good arrangements are very enjoyable to listen to because they take you on a unique journey of sound. Zack Langway should be proud of this album because he is the major driving force behind its success with 10 of the 13 tracks. More impressive is that Ridin' Derby covers so much ground in style, you would expect there to be a misstep somewhere, and there is.

That misstep is George Michael's Faith, which falls flat. It's a shame the opening and closing tracks of Ridin' Derby are the weakest, but don't be put off. Listening to Ridin' Derby is like going to a New York City Delicatessen and not caring about the bread because the meat is just so savory and satisfying.

Go get some meat. Ridin' Derby hits the spot.