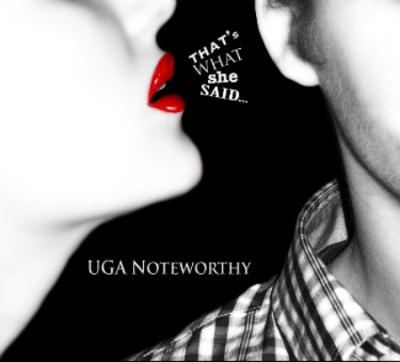 I had the great pleasure to spend some quality time with UGA Noteworthy in Athens, GA during the 2-day a cappella festival Team Burns Spring Sing 2009. Many of the talented groups from UGA performed, competed and participated in the workshops. Not only were the ladies of UGA Noteworthy talented and charismatic as they sang, but off-stage, they were unfailingly charming in the most southerly of ways.

Seeing them live is something I recommend without reservation. Their latest, That's What She Said... is also recommended, but with caveats.

Starting with strengths, the group ranges from coy sensuality to power belts, with tuning very good throughout. And unlike most collegiate groups, almost all of the leads are equally good. But the track Are You That Somebody? is the standout. The balance of parts, use of space in the arrangement, soulfulness of the lead, fullness of the percussion and overall energy are all unexpectedly strong.

I wish more of the album had that sound. The remainder of the songs contribute to an energy that's overly introspective. The biggest issue for the recording is energy. True, women's groups have historically had a tendency towards ballads, but even by that benchmark, things on That's What She Said... are mellow. Track after track — even Paula Abdul's old dance tune Straight Up — just sound too sleepy.

Did I mention: this is not the experience one has watching these talented women perform live?

The production, while adequate, is part of the problem for me. Many reverbs truly drown the singing, no matter which system I listened on. Some lead miking leaves unwanted and distracting low-mids muddying things up (Fools In Love). Balance issues crop up in the mixes — the most troublesome being that backups occasionally overpower leads. Some leads are hard to hear in parts (All Good Things (Come to an End)). Choices are being made, and to a degree these things are a matter of taste. But I found myself frustrated in trying to get the core of the songs.

The arrangements (intertwined with the production, as always) are okay, but not surprising and often not quite edgy enough. The textures are smooth, with common syllable choices. A more aggressive set of vocal percussion sounds could probably have done a lot to offset the smoothness of the arrangements — a little salt to set the sweet apart.

The arrangements don't generally depart heavily from originals (the gentler-than-the-original Let It Be being a noteworthy exception), but neither do they achieve the aca-realism style that became popular (and possible) a few years ago. None of the arrangements take the kind of chances we heard with Wonderwall and When Doves Cry on 99 Problems but a Pitch Ain't One, relying instead on the expressive qualities of their leads to capture the listener's attention.

And leads are indeed UGA Noteworthy's true strength. They all sound quite good, handling the emotional and technical challenges of each song like far more seasoned pros. It's a challenge to even pick favorites among such a talented bunch.

There's no question that there's a lot of pure singing talent here. But experiencing production, energy and arrangement melancholy simultaneously is a burden that weighs the scores down.

See ‘em live! You won't be disappointed. If you can't, then That's What She Said... will just have to do!

The Noteworthy ladies of the University of Georgia are back, bringing some seriously grooving tracks to the collegiate a cappella pantheon. But the same issue I had with the arrangements on 99 Problems But A Pitch Ain't One holds true for this album. Read my review for further details.

Even the praise is the same: Maggie Smith is an incredible singer/songwriter. Her work should be featured even more on this recording. The world is in for a real treat once we begin to hear more from her now that she has graduated. The male names have changed in the arrangers section, but the sentiment is the same.

The arrangements are the superior part of the album. Casey Branch is a magician when it comes to making endearing and intriguing vocal lines for the singers. Apologize and Fidelity showcase the expertise of each of the sections. Each arrangement masters the nuances of the song and show how Branch really knows how to breathe life into static notes. And sharing duties with Katharine West Fools In Love is completely captivating. The background is this dramatic cushion of bouncing bubbles that allow Melanie Bettis to float aimlessly from lyrical line to lyrical line while painting a maddening picture of sexual wanderlust.

The album opens quite anemically with a tepid take on The Sweet Escape which dovetails into a haunting lullaby version of Let It Be. Even though it wasn't sung as well, a more up-tempo version of Straight Up would have served as a better opener. The performers are a bit grittier and dirtier in their attack of this song, like the late '90s version by the UNC Loreleis. The difference is in the "woo-hoo" motif that is repeated in the opening. In the original, it's a signifier for getting the party started, here, it almost sounds like a death knell. Woo, this song is almost over!

The anemia doesn't leave later in the album either. Two songs are particularly disastrous. What should be a plaintive wail of a song (Before He Cheats) comes across as having less punch than a written warning by a substitute teacher on the last day of school. And let's not mention tepid My Lovin' (Never Gonna Get It). What more could really be said about it?

What is most frustrating is that these songs are sung exceptionally well. If you haven't already, you'll fall in love with the honeyed vocals of the soloists and background singers. All are pretty. Some have character. One splits syllables and adds an "h" to certain words. But man, they can sing. Nowhere is that more evident than the closing track Are You That Somebody?. That's the dirty funk needed on Straight Up that would have knocked the beginning of the disc out of the park. All hail Carlen Elliott.

There are at least ten female collegiate groups whose albums consistently rank as must-haves when they are released. That's What She Said... keeps UGA Noteworthy in that listing.

After rocking the aca world with Wonderwall off of 99 Problems But A Pitch Ain't One, Noteworthy is back with more of the same. More of the same is not a bad thing when you're one of the most innovative female groups on the college scene. That's What She Said... has a few clunkers, but it also has some tight arrangements, slick solos, and a beautiful original song (Move On, featured on Sing V). That puts it well above average in my book, and well worth a listen.

Noteworthy took some heat back on 99 Problems But A Pitch Ain't One for not doing enough of its own arrangements. This time around, the ladies penned 8 of 14 themselves. Interestingly, I found them to be the more engaging tracks on the album (with the exception of The Sweet Escape which is a sweet blend of studio assisted textures and nicely layered backgrounds). Here's hoping Noteworthy continues the trend and keeps adding more of its own work to the final product. At the end of the day, no one knows your group better than you do.

The sound of Noteworthy as an ensemble might be described as airy, or perhaps breathy, and beautiful. It's a sound that James Gammon latches right on to and wisely crafts into some stunning musical moments. The group thanks his "magical abilities" in the liner notes, and I would have to agree. The Noteworthy/Gammon partnership is a match made in heaven.

Of course, the trade-off with an ethereal, pretty sound is that it works better for some styles than for others. Let It Be and Move On are at the top of the heap as they best utilize the haunting quality present in the Noteworthy delivery. The Sweet Escape pulls through with a bit of bounce and a good arrangement, but some of the other rockers don't fare as well. Before He Cheats and Somebody To Love sound pretty, but lack the rawness and aggression that might have sold them better. In short, everything is energetic, but the energy doesn't always fit the song.

What Noteworthy does, it does very well. Creativity is in the group's DNA, which bodes really well for the future. The next step might be either refining the set list to songs that best showcase the aesthetic the group has developed, or to work on using more of a chest/belty sound when appropriate to give the edgier tunes more life. In the meantime, give this album a spin and you won't be disappointed.