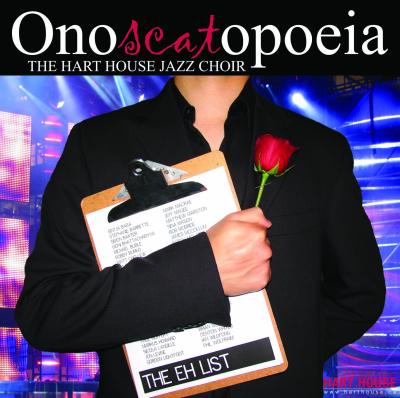 Sometimes a review will write itself: This latest recording by Hart House Jazz Choir Onoscatopeoia from the University of Toronto can be summed up in one word, "eh". But here's the kicker: that statement is filled with double meaning. There are some really captivating parts of the album, like the song Little Black Dress which is deserving of the long "ay" sound, while other aspects of the CD give one a baffled pause.

At moments, The EH List is a tolerable listen with some meaty chords here and there, pleasant enough voices singing leads and facile arrangements that aren't too taxing like Meglio Stasera — It Had Better Be Tonight and Eyes On Me. On the other hand there are songs like Sunny Days which bewilder the ear: blend goes out the door and breath control lacks support at the end of phrases, soloists become unbearable.

But even with the foibles, I don't hate the entire package. My shoulders raise up to the point of nearly meeting at the top of my head as a flippant "eh" rolls off my tongue when asked to categorize the album. I may give the CD a spin or two over the next few years, or I could possibly never hear it again ... and I'm okay with whichever decision comes out on top. No vested interest on my part.

A lack of vested interest that across in some of the performances on the recording as well. With twenty-three people singing on this disc the voices achieve some pretty amazing sectional blend. But when the two conductors try to mingle the sections, the singers don't always seem to care. Either their part is so insignificant that they refuse to sing them with any direction or dynamic phrasing, or they (the sopranos) think that theirs is the only section worth hearing at any point in time.

In this age of studio manipulation and enhancement, when a recording relies on a more natural soundscape, the musical ability and technical prowess of the recording artists have to be readily accessible. With Onoscatopeoia, the energy and spark of masterful singing fails to materialize. Intonation remains weak throughout (Beautiful Creature), a track will start under pitch (Stupid), or the tonal center almost evaporates (Sunny Days).

The last three songs are the true joy of the album. Maybe the group should sing more non-English songs. The highlight is the duet between Jenny Mena and Ian Wildfong, soon to be if not already newlyweds singing the Nelly Furtado and Juanes hit Te Busque in the native Spanish. And only because I'm a real sucker for that sort of thing. Good luck you two! Meglio Stasera — It Had Better Be Tonight has by far the tightest blend and song production, though the soloist doesn't quite live up to Buble standards. The closing track Bad Side of the Moon has the most energy, though it kinda rambles on incoherently.

The hidden track should remain hidden. It can't be funny even to the people who made it.

Onoscatopoeia should take some time and maybe try to land a master class with the Sacramento State Jazz Singers before the group's next recording. It'll do wonders.

Is bigger better? Turns out the twenty-three voices of Onoscatopoeia are equally capable of creating powerful sound explosions and basic noisy ruckuses. To really wow listeners with an a cappella choir this size, Onoscatopoeia must turn their numbers into an asset, creating rich and unique music not achievable by smaller groups.

On a wonderful, cozy high note, every number on the The EH List is tied to the group's Canadian homestead via "a composer, an arranger, a producer, or an artist". It gives the album a special and lasting appeal. The very idea conjures up images of fly fishing and moose watching under the spell of bright maple leaves. And quite seriously, it also signifies a group that is willing to push itself musically to make a restricted album work, and a group that loves who it is and what it's doing. That's something we can all get behind.

But back to being large and in charge in Canada. Songs like Meglio Stasera — It Had Better Be Tonight really favor a group this size, since the driving intensity and jazz sizzle is only more so when nearly two dozen voices are hittin' it hard. Arrangements are interesting turf for a group this large, too. You can dole out a heck of a lot on each part and still bundle it all up successfully (If You Could Read My Mind, Eyes On Me), creating very engaging pieces for the listener and performer alike.

You can also, unfortunately, dole out too much to your singers. It's easy to go overboard on the arrangement end with so much raw material to work with, which happens on Back In Town. Also, if twenty-three voices are singing at forte, they'd better blend well and sing in tune or the problems become extra loud. This is the case on Sunny Days, for example, which is heavy on poorly executed unison parts.

The energy level is not as high on The EH List as it should be, a problem also present on this group's previous album From The Hart. Is the group holding back in an effort to not overpower their fellow singers? Whatever the cause, the result is a general sleepiness trailing through most numbers. This issue, coupled with an unexpected absence of standout soloists from such a large pool, also contributes to their average score.

The EH List has riveting moments and some good ideas, but mostly has a "the group is still growing" feel.

Ah, to be Canadian. It must be tough to spend all those months in the snow and cold, playing hockey, tapping maple syrup, and getting from here to there by dog sled. Personally, I'm jealous. To be able to step out your back door and strap on the skates for a quick game of puck, only to finish the day off rehearsing with a "jazz choir" called Onoscatopoeia that is less jazz and more "damn good contemporary group". Ah, to be Canadian. I imagine it's a bit like heaven.

Vocal percussion is on the elementary side of things throughout the album, but it's about the only thing sub par. I don't know what their musical training consists of north of the border, but this is the third group I've heard that has outstanding musicality and arrangements (the others being Cadence and Wibijazz'n'). The chord structure, the rhythmic precision ... I gush.

It helps that Onoscatopoeia has the soloists to bring these musical thoughts to life. Kathryn Pettigrove on Sarah McLachlan's Stupid sings as though every word were her last. Matt Chellew is equally convincing on Beautiful Creature. I wish I could single these two out as outstanding examples on the album, but really they are pretty much standard fair on an album stock full of outstanding soloists.

One of the most interesting things to discover in the liner notes is how the group says that each song is "based on the performance of" the artist they're covering. It seems a simple difference from college groups in the States, but it's a huge difference in philosophy. These Canadian groups aren't merely covering the songs and performing them note for note how the original artist does. These groups are using their imagination, the strengths and weaknesses of their singers, and re-imagining these songs in their own vision.

The other interesting thing I stumbled across while listening to the album is that in many of the tracks they incorporate other artists/songs, but in a way you might not think of at first. Most a cappella groups will use song quotes from the same artist or other artists to add interest to the song. Onoscatopoeia uses other songs, but seamlessly incorporates them into the fabric of the main song's idea as if it had always been a part of it.

Here's the bottom line. Onoscatopoeia has crafted an outstanding album of songs where all feel like the best song on the album. So, yeah, this one's worth it. I wonder what I have to do to become Canadian.