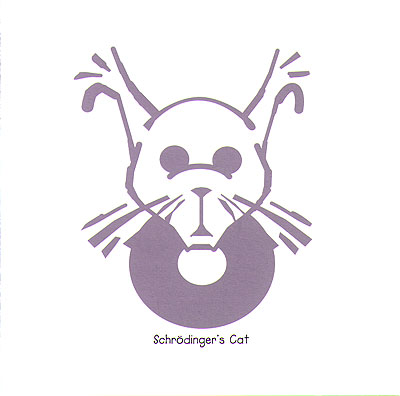 Next generation a cappella is upon us, and I don't mean "revolutionary" "ground-breaking" or any of those other futuristic words.

On the contrary, all of the ground that Schrödinger's Cat covers in their debut disc already has been well broken in. It's been around, long enough to get comfortable and gel. Which means the time is ripe for a fresh, cross-referencing groove, exactly what Big Beat A Cappella provides.

The Bobs are here, Bobby McFerrin is here, and so are a number of multivoice, collegiate-style arrangements. But there aren't too many voices, which sets the stage for a locked sound and a lot of groove. The a cappella establishment has been harping about danceable vocal music for years, but this disc is the first album since Funkwich (or maybe Five Live's Quintessence) to live up to the billing. Think of Big Beat A Cappella as a dance remix album — all your a cappella favorites, cleaned up and re-tooled for a solid, continuous groove.

As for the songs — my favorite was the rocking You Can Leave Your Hat On. Those of you who are less overexposed to the genre may have other favorites. Those of you who share my overexposure will appreciate the choice of the live version of In Your Eyes, from Peter Gabriel's Secret World, Live album, even if they should have arranged the Paula Cole parts out or down. You'll also appreciate a version of Day-O that is mostly in tune with something of a lounge beat, no less.

On the hidden tracks — note to group: the backwards song at the very end is worth its secret status. The rest of the outtakes are not. Just because you're not on the liner notes doesn't give you license not to edit.

Big Beat A Cappella is a hard disc not to like. Pop it in when you're driving or doing housework or as a background to anything else your heart desires. Sing along — you know all the songs. And you don't even have to worry about your favorite standard turning up maimed and bloody along the way.

Looking for a change of pace? Typical college a cappella got you down? Well, this album should help pull you out of that quagmire of ennui. Schrödinger's Cat (from the University of Texas at Austin) has produced an album that captures their own special flavor of a cappella. Odds are you have not heard something quite like this.

It's not because they perform songs that you have never heard of. It is not because they sing notes that only a dog can hear. The big thing that separates them from the rest is how they do songs that you have heard before: they do them with style and verve... and they beat the hell out of themselves while they do it. Schrödinger's Cat calls what they do "Big Beat A Cappella". They also describe this as kind of like Stomp! meets Bobby McFerrin. They beat their chests, they clap their hands, they stomp their heavy shoe-laden feet. They make a sound that is thick and driving and quite addictive (unless you are one of those people who hate percussion). This is why the term "Big Beat A Cappella" describes Schrödinger's Cat so well. It's obvious that these guys love what they do.

This album is full of interesting songs from a broad range of genres. But they all seem to fit together pretty well — not like the technicolor coat of many colors that other college groups put on an album. For these groups, the album is a kind of yearbook to capture everything they ever tried and succeeded (or failed) at. Schrödinger's Cat put together something that is a lot more professional, and a lot more consistent. Every song on the album is full of strong effort, and loaded with style and soul. There are no pitch problems to speak of, and each arrangement is interesting and well put together. Some of the really outstanding songs on the album IMHO are the Prince classic When Doves Cry and The Bobs paranoia-inducing Through The Wall. When Doves Cry seems to really capture the soul and energy that Prince had, while not going overboard. The trademark screaming at the end of the song is done so well by John Pointer that you won't care that there is a stocky white Texan singing rather than a short, skinny black man from Minneapolis. Mr. Pointer really nails it. Through The Wall is so good, that I actually think it's better than the recording The Bobs did. Nothing really takes the place of the insanity of Gunnar "Bob" Madsen, but Jackson Blacklock does a great job all on his own. All of the other songs on here are also great for their own reasons.

So, why do I think you should buy this album? ('cause I do, you know.) Because it is well done, it's well recorded, it's sung with soul and passion. Because it's exciting — because it is different from the rest of the college a cappella stuff. Does that sound like something you want to hear? Does that interest you? If so, buy it.

Wow. I saw the group, saw they were from Texas, and was curious about it, as I don't get to hear much Texas a cappella. All I have to say is that if these guys don't at least make a run at doing a cappella professionally, it will be an incredible loss to the a cappella community.

What struck me first is their innovation. Vocal and body percussion is nothing new in a cappella, but the way they integrated it was like nothing I ever heard. They said in their liner notes that the musical group Stomp! was one of their influences, and it shows. The whole group uses vocal percussion, chest slaps, foot stomps, anything that gets their sound across. And it presents a wide and varied mixture of sounds to work from, deeply heightening their experience.

Their song selections work very well for them. Their tightest stuff were the two Bobby McFerrin numbers...incredibly put together. I wonder out loud where they got their version of In Your Eyes, which has an extended intro before it goes into the song most people know. They also seem to be movie buffs...most songs that aren't covers of a cappella sources come from movies... In Your Eyes from Say Anything, When Doves Cry from Purple Rain, BOTH Day-O and Jump in the Line from Beetlejuice, and You Can Leave Your Hat On from both 9 1/2 Weeks and The Full Monty.

BUY THIS. The liner notes say they all go to U. of Texas at Austin, but their sound and production value shows they have a potential future professionally. Well worth the money.

The genre of a cappella has expanded once again. Ranging anywhere from choirs to collegiate pop groups, Schrödinger's Cat has found a new branch: "Big Beat A Cappella". The music has a much fuller sound, percussion-driven songs, and uses the human body, not only the voice. Whatever one chooses to call it, Schrödinger's Cat has quickly established themselves in two years as a talented group.

When you get the CD, fast forward to In Your Eyes for an amazing replication of the extended version of the song. The soloist blends well with the ethereal feeling of this track, and the arrangement is brilliant. I'm somewhat misled by the number of voices, because it seems nearly impossible to have only seven people produce this much sound (perhaps overdubbing; either way it's fantastic). I had this track on repeat for over an hour... it's THAT good.

With a few tuning problems on Through the Wall and some chords in Sexual Healing, the album is otherwise filled with crisp, solid songs, and you will not find yourself overloaded with too many tracks. Although some of the arrangements are a bit repetitive, with only a few details changed, every song on this CD is a keeper. (Even the "farting percussion" on the last track is hilarious...) However, putting That Lonesome Road as the last listed track seemed to be the group's way of showing "By the way, we can do close harmonies as well." Personally, I didn't think it fit with the rest of the music (i.e.- no percussion on this one!) and it's a rather standard arrangment.

None of the soloists fall into the "highly exceptional voices" category, but they each add flavor and style to their songs. The entire CD has a groove, a driving strength behind the songs that will make you listen very carefully to the details (such as the really high-pitched notes in When Doves Cry). There's a great balance in the recording among voice parts. For obvious reasons, the stomp/percussion parts are heavier, primarily because that is what makes this group work.

Seven guys beating, smacking, and stomping themselves to death for 12 tracks. What more could this female college reviewer ask for?

"Big Beat A Cappella" says it all: this is a cappella with major rhythm. Moving beyond vocal percussion (or perhaps regressing), Schrödinger's Cat incorporates a range of body parts into their sound: chest-slapping, stomping, clapping, and all done with remarkable aplomb and unity.

One does well to recall that the group sings. The percussion, while powerful, never occludes what else is going on: strong harmonies in normally exciting and often innovative arrangements. Their cover of Prince is great, like most of the songs rich in texture and spanning a wide range of notes and sounds (with the stomping, it seems, taking place of any extremely deep bass action). Soloists are admirably soulful and appropriately comedic when the time is right: for a group which bills itself on its "big beat", they are able to pare down the intensity and up the harmonic ante very well. I could have stood for some more showcasing of purely vocal talent; a percussive hiatus here and there could have let the voices shine through quite strikingly.

All in all, an impressive album. Having seen the group live, I am in a position to note that, happily, this studio effort has lost nothing of the energy the group brings to performance, and the wonderfully-orchestrated percussion comes through loud and clear.

That percussion really is well done, even if slightly strange in being an innovation from Texas. Once the novelty wears off, the group still shines: far from being a one-trick wonder, Schrödinger's Cat turns out to be very much alive inside that box (and Heisenberg be darned).