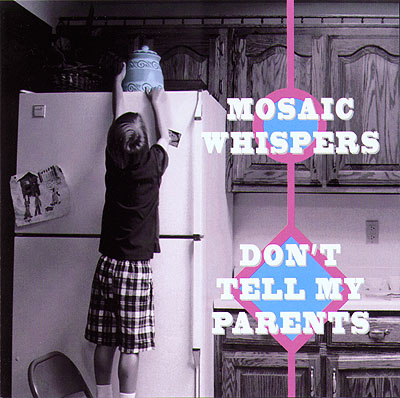 The Mosaic Whispers continue to grow and improve, and Don't Tell My Parents is easily the best of the young group's three CDs. But the album could still be dramatically improved. Here's the fun part — YOU can improve it yourself in the comfort of your own living room without re-recording a single note! Just follow these simple instructions.

Step 1. Downplay the '80s stuff. The CD is mostly '90s alternative tuners with a few '80s pop hits thrown in for fun. But because of the track sequencing, the album strangely seems like a predominantly '80s disc. Opening with Walk Like an Egyptian sets the wrong tone. Reprogram the disc so that it opens with a more fitting song. You choose. You'll also need to take a magic marker and black out all of the cheesy pink, blue, and white design elements. While people get nostalgic for '80s music, nobody misses bad '80s design!

Step 2. While reprogramming the discs sequence, cut Whistling in the Dark and Suddenly Seymour. Whistling is fun when They Might Be Giant's sang it, but the forced bass solo is stiff and goofy here. It doesn't help that none of the other singers are putting any heart into the song at all. The original got lots of drive out of a brassy horn section. This version instead features disengaged backing vocals. Oy. While you have to applaud the group for not trying to impersonate Ellen Green on Suddenly Seymour (from Little Shop of Horrors), they still should have picked a belter to sing the female leads. And the male vocals really call for a good character actor. What they got is a good singer. These two clunkers are next to each other on the track list and really slow down the pace of the album, which had otherwise been on a roll with 3 a.m., Foolish Games, and Not the Doctor. Then Whistle and Seymour derail the album and poor unlucky Walking on Sunshine has to try to get you back into the groove. It's an unenviable task.

Step 3. This is for professionals only. If you've some editing equipment around, separate the hidden bonus track from Where's the Love. The bonus track is actually darn funny and it mercifully they don't place a long pause after the last official track, but you aren't always going to want to listen to the hidden song every time you listen to Where's the Love. There's no good reason to group them together on the same track.

There, wasn't that fun? Now sit back and enjoy. Pay close attention the arrangement of Foolish Games which puts all it's energy into creating huge harmonies. And put away your prejudices — the cover of Hanson's Where's the Love is pure fun.

The Mosaic Whispers have always impressed me with their absolute lack of fear. They have never been afraid of singing whatever they wanted, no matter how those songs sounded a cappella. Sometimes they really managed to put together a few songs that were really good (in an idiosyncratic way). They were usually accompanied by songs that were not nearly as good. Their last album, 3 a.m. and nowhere to go I think was their best to date. Unfortunately that includes this new album.

Don't Tell My Parents still has the Mosaic Whispers' main philosophy intact (to sing whatever interests them). There are songs that range from The Bangles to They Might Be Giants to Starship to Garth Brooks. They even picked up the song Goldeneye by Tina Turner. But they also picked up a few more pitch problems and a greater feeling of sloppiness for this album. Example: Not the Doctor was done in the chaotic style that U. Penn's Off the Beat made famous, but not done nearly as well as OTB. This song just simply sounded chaotic and sloppy when done by MW. That description seems to cover a great number of songs on this album. There are no stand-out soloists to be found anywhere. This album really doesn't do anything for me. Not very exciting, not very polished, not very interesting.

There really isn't much more to say, so I will cut to the chase: If you like the Mosaic Whispers, buy the album. You probably won't listen to it much, but you can say you have it. If you don't like MW, or you are looking for some good college a cappella to add to your collection, don't bother with Don't Tell My Parents.

The Mosaic Whispers' third CD, Don't Tell My Parents is all about range of styles: from '80s (Walk Like an Egyptian, We Built this City, Walkin on Sunshine) to '90s (3 a.m., Sunday Morning); from the underground (Whistling in the Dark) to musical theater (Suddenly Seymour); from pop shmaltz (Goldeneye, Foolish Games) to country (She's Every Woman) to Dance (Where's the Love?). Amazingly enough, throughout these styles something consistent, something "Mosaic Whisper-y" remains. That's even more amazing considering that this album is the culmination of three years work!

Yes, sometimes the sopranos stand out and sometimes the intonation could improve a little, but this album still manages to edge itself past the average collegiate sound through interesting song choices, strong soloists (Jeremy Hisaw, Jenny Boyer), and some noteworthy arrangements (Not the Doctor, by Jenny Boyer, being my favorite).

The production values are good. Nothing to distract. Basically appropriate reverbs. Even an occasional tasteful echo or flange here or there.

I would have liked to hear some stronger VP and a little more bass presence, but overall I liked Don't Tell My Parents. This is just the sort of creative collegiate group that ought to to add originals to their repertoire. I look forward to hearing more from Mosaic Whispers.

The arrangements are solid for a collegiate group; the Mosaic Whispers understand how important little intricacies are. Syllables change, soloists' words are sung in different places by the other members of the group, and chords are filled out well.

It's refreshing to see they have worked on syllables and dynamics on this album; two things that I thought needed help. However, with some of the choices of syllables, the words get rushed and the overall sound is a bit sloppy (see Not the Doctor). There are tempo problems on one too many songs, especially on 3 a.m., Foolish Games, and it weakens the overall production. I loved Suddenly Seymour because the Whispers always seem to successfully sneak a musical number on the album. There are also a handful of smaller tuning problems (a few chord progressions only) on the CD, falling in songs such as Goldeneye.

All of the soloists have a hold on their songs, even if they're not the most exciting songs to record (Foolish Games as an example). I always enjoy when a bass gets a solo (Whistling in the Dark). Drive is turned into a beautiful, arpeggiated song. As you can see, there is something to say about many of the songs, which demonstrates to me that this is an album to listen to over and over again. There's even a Hanson tune...

Something I usually don't comment on is song order; I think this disc has most of the driving, fuller arrangements in the beginning, and by the end of the CD I want to skip back to the beginning. Songs towards the second half are strong, but overall are more lyrical, with thinner layering of voices.

This is a commendable effort by the Whispers, and I hope that their next CD focuses a little more on tempo but keeps the same kind refreshing choices of music and strong arrangements. And the hidden track? Loved it, but I don't want to give it away. All I'll tell you is that in RARB we've been calling it 1-900-WHISPER.

Through and through, this album offers up some serious a cappella ass-kicking in the way God (or Yale) intended: a wide variety of songs, some humor and some seriousness, tight harmonies and large, shining chords. Perhaps I'm just partial to any group whose VPist is named Ben (heh heh... we're taking over), but I was consistently entertained and (mostly) impressed by what the Mosaic Whispers have put together.

(Incidentally, the album is a compilation of tracks recorded by three years' worth of group members; while the first year is not bad at all, there is, I think, a noticeable increase in quality by the third year.)

Very non-standard songs have made the final cut: from Depeche Mode to Little Shop of Horrors, from glam-rock to ska. For good measure the group treats of the '80s as well (The Bangles etc.). Most are done well, although as is often the case with collegiate a capella there is some space yet for simply more rock in the rock and roll: We Built this City is fairly tight but not quite convincing. In that song as well occurs one instance of the group's infrequent tuning problems. Rhythm is never an issue, built up on a solid percussion backbone which is consistently cool and not overdone (great snare sounds make up for the incoherent clicking some other groups produce).

Soloists are quite good, as well. Again, classicalism in tone and interpretation can have some strange effects on particular songs, as Jenny B. shows: she struts her stuff well with the Bangles but leaves a little out when Walking on Sunshine. A surprising bass turn spices up the Phish, and in general parts are doled out well.

A keeper? Indeed, a gem. Collegiate a cappella as it should be: solid, fun, well-ornamented by percussion and shot through with good spirit.

(The hidden track is daringly done... I wonder how many frantic fans actually try to call.)