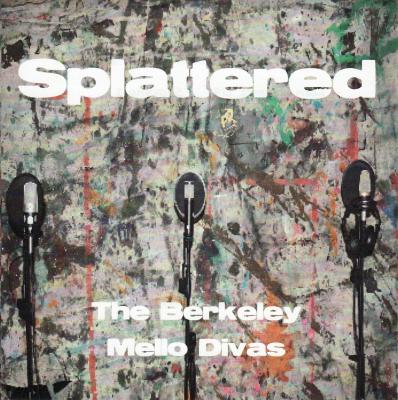 The Mello Divas sound like they'd make great television. High school girls from Florida sing pop songs in adorable treble voices! They're so cute! They have so much potential! And when we revisit this album in the aftermath of future success, we will inevitably see foreshadowing of the greatness to come.

Once we have all that context, Splattered will be fun. Right now, it's kind of a mess. The arrangements are tough and high, throwing every note into (often literally) sharp relief.

Also the songs are in the wrong order. Weak groups should always open with their best and most appealing. But the Mello Divas lead with the squeaky ensemble bits and bury the good songs in the middle.

Crazy would have been a good album opener. It's not as strong as Say My Name, which is the album's best cut, but it's a solid performance with a good solo and good energy. The R&B number could go next — it's soulful and stripped down, a nice break from all that treble. From there you'd go to Traveling Soldier, which is rough but salvageable, and then maybe Waterfalls, minus the intro. The rest of the album could follow, with a friends-and-family only advisory.

This album will be great when one of the current Mello Divas hits it big. Until then, most of us will want to leave it on the shelf.

The auditioned high school nonet, the Mello Divas from Tampa, Florida's Berkeley Preparatory School is a talented group of individual singers, who unfortunately haven't quite mastered the concept of recording a good album.

Led by director Rob Redei, their new album, Splattered has some moments of brilliant singing that can only be achieved by the pure voices of a women's ensemble at that age. But unfortunately, the lack of high production values (the liner notes are sparse, and the CD itself seems like a CD-R replication) and inconsistent musicality hamper the overall quality of the recording.

Splattered illuminates these problems right at the beginning. Can't Hurry Love actually rushes as soon as the melody starts. The Alto IIs know their part, and the middle voices line up pretty well during the intro, but as soon as the melody starts on that exposed chord, it's every woman for herself. And the song goes downhill from there. As happens throughout the disc, when the Soprano Is are given lyrical lines to sing, the comprehension leaves. It'll be a few more years before they can support the vocal technique needed to carry off singing in the stratosphere without sounding shrill.

The pitch, blending and balance problems continue through the rest of the disc. Danny Boy shows just how young and inexperienced the voices are in ensemble singing. The group fares a little better on Traveling Solider, though on all of the songs they fall in the trap of singing every part at the same dynamic level. Background and auxiliary parts become just as important as melodic lines. Better production could have solved some of the balance issues that plague the recording.

On a positive note, there is an interesting future for several of the soloists and all should have great careers in the collegiate group of their choosing. Desiree Okoh gives a very nuanced delivery on I'm Yours, her alto being full of life and gusto. Tayler Hickey's Say My Name and Signed, Sealed, Delivered are pretty sassy. Leen Doumet's has a feathery, light soprano that is much better utilized singing the solo on Crazy than it is singing the Sop I parts on the other songs. Alissa Kotranza has a great take on Mika's Happy Ending and actually fulfills the promise of ending the disc on a pretty good note.

But the real find is Kyleigh Roberts. Her rich alto is mesmerizing and captivating on Waterfalls. The tonal quality in her lower register booms full and rock solid. She's a senior now and I hope she has plans on attending UNC, Duke, UVA, UGA, Clemson or Oregon as the powerhouse divas on those campuses would do well in holding some pre-auditions for her.

I could keep dissecting each of the songs to point out the problems, but there is no real need. Other than a few curious a cappella-heads, not many people are going to be picking up a high school disc from a group they've never heard of before. What I can do is encourage the group to continue to work on fundamentals so that they can overcome their tuning and balance problems. And for Mr. Redei, he should continue to hone his arranging skills so that as his talent pool grows, he's better able to harness their potential.

Splattered, the recent release by the Mello Divas of the Berkley Preparatory School, is at basic music levels in every nuance of the recording. Splattered shows three mics with paint splattered all over a blank canvas on the CD cover. Although an interesting approach to visual art, randomness rarely comes across as appealing in music unless you have all of the basics mastered like a Bobby McFerrin or [insert any great improvisational musician here]. The Mello Divas sound splattered, but not in a good way.

It's clear to me the Mello Divas need rehearsal time and attention to detail. Rhythms are rushing everywhere, gasping breaths are heard audibly in the recording, and tuned chords are few and far between at best.

I believe this is a bottom level yearbook-quality album. It sounds as if there was too much repertoire for these young ladies to handle in the time allowed for rehearsing the music and recording it. The arranging (most done by director Rob Redei), while all in all not bad, is far too advanced for the skills these singers possess. They need something that will allow them to tune easily and gain confidence through their performances. Fewer parts and simpler rhythms will be a start toward some success here.

There are a number of vocal issues present on this recording such as poor breath support, lazy consonants, and a lack of connection between voice and breath that need to be fixed before the Divas think about putting out a recording to the public again.

The Mello Divas fare somewhat better when they sing more traditional and block chord arrangements such as Danny Boy, Traveling Soldier, and Happy Ending. They should certainly draw from the strengths of these tracks and keep working towards a better final product.

Splattered is simply not good when compared to the rest of the a cappella world, and I can't recommend it to anyone.

To order this album, email the group's director.