None Of The Above (NOTA) 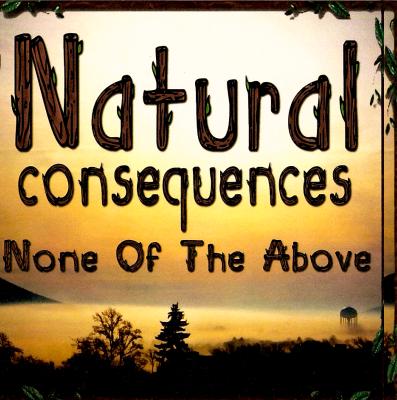 Natural Consequences from Penn State University's None of the Above reminds me of the first Broadway show I worked on. It was a quickly-forgotten revue called Comedy Tonight (later nicknamed Comedy Tonight, Load Out Tomorrow), and despite universally poor reviews, its producer was determined to run a critic's quote from The New York Times in the production's ABC listing. The result?

It's unfortunate that Natural Consequences stirs up such memories of a frustrating quest to find something positive to say, but alas, this is no doubt a well-intentioned CD that falls woefully short of anything that might be considered reasonably OK in the collegiate a cappella world (let alone the a cappella world at large).

Matt McCloskey, the group's vocal percussionist, is perhaps the sole bright spot, and even his lustre is dulled by production that is well below par and at times renders Matt almost inaudible. When you can hear him, however — Call Me When You're Sober and If I Am in particular — it's clear that he has some serious chops. Would that he had an engineer and producer who knew how to show them off in the best light. So Are You To Me is also a nice moment for the group: singing in relative unison seems to be the best way to ensure passable tuning, a semblance of blend, and an overall sound that isn't cringe-worthy.

Beyond the VP, though, there isn't an area one can focus on that is without significant shortcomings. The tuning in non-block-chord sections is rarely better than abysmal. It matters not to me if the group recorded everything in one take, with one mic or four mics or whatever. Unless they simply wanted an aural snapshot of where the group was at this moment time, the tuning, or lack thereof, is really inexcusable. More often than not, the sound is that of a group that has just learned an arrangement and is still miles from being able to go into a studio with it.

Sadly, the arrangements are not much better. There are a few that sound like they might be relatively decent — Torn and If I Am come to mind — if only they had been performed in tune and if only a capable studio technician knew how best to record them. But the vast majority of the others fall victim to a whole host of poor decisions: from rangy, rapidly moving lines that would be nearly impossible for even accomplished singers to keep in tune, to voicings that either muddle the chord in the middle or spread it out far too widely to allow for blend, to medleys that feature half-hearted arrangements of individual songs, awkward transitions between them, and a few outright mistakes in transcriptions.

Rather than pile on even more, I'll end my review here. I have no doubt that the students of NOTA are proud of their achievement and together with their families and close friends, they may enjoy repeated listenings of this CD. As for me, it's one and done.

My experience with None of the Above did not start auspiciously: after opening the clearly homemade packing, there was a blank CD-R in the case. Needless to say, I wasn't expecting much when the replacement finally arrived, and the contents did little to exceed my expectations.

Natural Consequences is a throwback to the simpler days of a cappella. Arrangements are unpretentious and repetitive, doing their best to mimic the original but rarely providing any compelling momentum. Comfort is a prime example, with the same basic four-measure pattern being repeated ad nauseam.

Production is also decidedly old-school, and I wouldn't be surprised if it was tracked with analog. The sound is hyper-organic, with only some compression and reverb on the vocals. I'd like to say the lack of effects and pitch correction is refreshing, but the singing's simply not good enough to stand on its own. Pitch problems abound, blend is subpar with parts popping out of the texture all over the place, and even tempo is erratic. Not even energy and emotion saves Natural Consequences. The singers sound timid and mousy, like they are going through the motions rather than actually enjoying the music. So Are You To Me and Torn stand out with decent solo work, but the rest of the leads do little to elevate the mediocre backing.

None of the Above seems to have missed out on the last ten years of a cappella evolution, and the result is an album that doesn't cut it against the competition. In that respect, Natural Consequences turns out to be an apt title.

Having one medley on an a cappella album is a bold choice. Having two is ambitious, and having three begins to border on foolish. Medleys are tricky to execute: usually multiple soloists are involved, transitions have to be nailed, and (most importantly) songs need to work together somehow for the medley to be successful.

Penn State's None of the Above (or, as they call themselves, NOTA - an unfortunate coincidence with the Sing-Off winners!) has three medleys on Natural Consequences. The first, Dispatch Medley, links three songs by the band Dispatch (The General, Out Loud, and Small Change). While the connection is clear to those who are familiar with the original group, NOTA does little to foster the connection, so the story or sentiment behind each tune is muddled in its excerpt here. Switching to a female soloist for the second section (Out Loud) is a nice, clear signal that the speaker is changing, but then the group uses both a male and female soloist on The General, thereby losing any sense of the tune's narrative. Add to that the backing voices, which sometimes complement and sometimes detract from the solo, and Dispatch Medley just feels disjointed and choppy.

Girls Medley fares only slightly better; it follows the typical collegiate formula of Song 1 (Whitney Houston's I Wanna Dance With Somebody) plus Song 2 (Cyndi Lauper's Girls Just Wanna Have Fun), culminating in a duet of the two songs. This medley actually works in concept (it's easy to see the common themes between the two songs ... or, at least, the internal conflict between settling down and just having fun); it's the execution that's lacking. The backing voices just need more energy and intensity.

And that is the crux of the problem on Natural Consequences. The recording lacks the precision, energy, and crispness that we've grown accustomed to in the past decade (or so) of a cappella recordings. Let me be clear: a cappella albums do NOT need to have that glitzy, fancy studio sound to be compelling. However, without studio assistance, a group needs to be even more precise in its recording. As Long As You Love Me and Torn feature backing parts that don't quite line up (in pitch and in tempo), making the songs sound amateurish at best.

In general, NOTA's arrangements and recordings work best when the songs are slower and more melodic, as in the beginning of Call Me When You're Sober and the entirety of So Are You To Me. If the group can't pinpoint exactly what causes the choppiness in the other songs (limitations of the singers, limitations in the recording technology, overly complex arrangements), then work with what these singers can do well: the slower-moving arrangements that don't require the crisp precision of a faster-paced arrangement.

The group's final medley, THON Decades Medley, is likely a reference to Penn State's well-known Charity Dance Marathon. As expected from the title, it's a hodge-podge of songs, from the Four Seasons' Oh, What A Night and Neil Diamond's Sweet Caroline, to Lady Gaga's Just Dance and Ne-Yo's Forever. Again, most of the transitions are choppy (a few actually are smooth, such as Rock and Roll All Nite into Girls Just Wanna Have Fun), and this is just a collection of songs lacking a theme (although a few of them do touch on "dancing", but that's not a pervasive connection). Ultimately, though, THON Decades Medley suffers the same fate as the rest of Natural Consequences: sloppy arrangements, imprecise chord changes, and backing voices that just lack energy.

As a footnote, I offer one more comment about sloppiness. NOTA has a one-page insert for its CD. Although this allows relatively little space for writing credits and performer information, I still wish for a little clarity there, or at least the abbreviation "apb" (as performed by), just so the group could acknowledge its awareness of the history of the songs it performs here. Even though the group does Cake's version of I Will Survive, the song should not be credited solely to Cake, and Torn is originally an Ednaswap song, not a Natalie Imbruglia one.