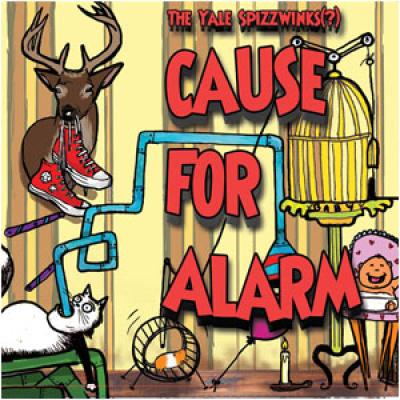 It's been five years since I reviewed the Yale Spizzwinks(?)' Simply Put, but a group that's been around for going on 96 years isn't likely to change all that much in that short a period of time. In this case, that's something of a mixed blessing.

To their credit, the Spizzwinks(?) break a bit of new ground within their own musical tradition with a smidge of VP here (Grace Kelly, Billie Jean) and pitch bend there (The Future Soon). For a group that has sounded essentially the same for so long, it's somewhat refreshing. What's more, the group continues its pennchant for trying to cover reasonably current pop songs alongside the more traditional Broadway and/or standard fare that is their bread-and-butter. Song About the Moon and I'm Yours have a lilting, lyrical, mid-tempo feel that allow the group to seem adventurous without venturing too far, and Landed finds a nice balance between trying to be hip and trying to be true to the 'winks signature sound.

What can't be escaped, though, is that what might seem musically dangerous for the Spizzwinks(?) remains pretty rudimentary for the rest of the a cappella world. The very same VP that is so unexpected is also what elevates — at least on the surface — the arrangements of Grace Kelly and Billie Jean from being merely mediocre. In truth, there's not all that much going on, but put a processed bass and backbeat behind it and it feels more impressive to the casual listener despite not being so.

Indeed, it would take a level of creativity the Spizzwinks(?) haven't yet found to give them the same sort of respect that the King's Singers earn in the professional world. That may seem like an unfair comparison, but there is an instantly recognizable sound to both groups that is classical, trained, and borderline square. Yet both groups enjoy dabbling in repertoire that flies squarely in the face of what listeners might expect. But where the King's Singers seem to have diverse and ever-intriguing bag of tricks at their disposal, the Spizzwinks still paint a bit too much with the same brush over and over.

This is not solely an issue of repeating repertoire from past albums, which is thankfully kept to a minimum here (in fact, there is a noticeable absence of old-school glee club fare here which is arguably what the group does best). It's the fact that Why Should I Wake Up stylistically feels a lot like Nothing is too Wonderful to be True, which feels not entirely unlike In My Life, which in turn resembles Every Time We Say Goodbye ... all relatively unison arrangements featuring very similar harmonic techniques and voicing. Peppier tracks like the newly-arranged Out of My League and The Future Soon have a bit more layering than one might typically expect from this group, but they're still not that far afield from something like Steamheat, with an arrangement dating to ... 1979.

One other interesting development in the 'winks sound: it's even more studio-ized than ever. That makes for a lush mix and a precision that probably surpasses what they've achieved on all of their prior released. On the flip side, classical groups of this sort are supposed to make it sound effortless. With the 'winks, you can hear how hard they're working and, perhaps more importantly with such a "naked" sound, you can hear where the man behing the glass took over for the man in front of the microphone.

All of this leaves us with an inherent contradiction. This is a group with a long tradition and a desire to remain true to that tradition while simultaneously pushing the envelope at least a little. On the one hand, this means they may never join the highest echelon of collegiate groups. On the other hand, it means they'll keep doing the thing they do best, and doing it extremely well. And for those who enjoy this style of music-making, that's certainly no cause for alarm. Quite the opposite.

The hyper-produced, effects-driven album has become the norm for premier collegiate a cappella today, and I can appreciate some connoisseurs' arguments that computers have supplanted the voices as the star of the album. The problem is that few au naturel albums stand up to the studio-enhanced perfection we've come to expect. Enter Cause For Alarm, one of the finest collegiate examples I've heard that manages to bridge the gap between classic glee-club ambiance and the crispness of the modern recording.

This amalgamation of old and new starts with the playlist, which blends everything from Cole Porter and The Pajama Game to Queen, The Beatles, and Michael Jackson, and even an original composition. At first glance, it looked like a recipe for disaster. Yet with the Spizzwinks(?)' deft musical handling, the tracks fit naturally together and certainly kept the music interesting

One of the reasons everything works is the singers' great musical abilities. Whether nailing the tricky chord combinations of Why Should I Wake Up?, the brash, full richness of Grace Kelly, or the groovaliscious vibe of I'm Yours, the singing is fantastic. Blend is superb, diction excellent, tuning top-notch. The group's talent shows. Solos are uniformly good, too, with Caldwell's work on Grace Kelly a true knockout. If I had one complaint, it would be that these men could let loose a little more, especially on harder-hitting tracks like Somebody to Love.

Production is also top-notch. Bill Hare has captured the glee club-style sound, modernizing it without overpowering it. Too often, albums going for a more organic feel end up sounding out-of-tune and poorly reproduced. Here Hare takes advantage of modern bells and whistles without compromising the Spizzwinks(?)' more traditional look-and-feel. Even the closer, Billie Jean, manages to sound in-place despite its electronic bass line, guitar riffs, and digitized percussion.

I would be remiss in my duties if I didn't mention the interludes. These skits — which I guess are supposed to elicit a sense of classic dinner theater or radio drama — ruined the flow for me. I enjoyed the album much better when I omitted them, and I wonder why they were included.

But overall Cause For Alarm is a fine album, and certainly proves you don't need to sell out the human sound for your CD to be a success.

Bear with me for a moment.

Circa 1998 I attended an ICCA competition that included the U.C. Men's Octet, the California Golden Overtones, the Stanford Mendicants, and perhaps one or two other groups. The Men's Octet and the Overtones performed mainly contemporary a cappella covers of various pop/rock songs from the past decade or two. The Mendicants performed an old-school routine with corny jokes, glee songs, barbershop arrangements, and perhaps just a single contemporary song. Although their singing was really quite good, the Mendicants' overall performance was a notch or two behind the Men's Octet and the Overtones, and their art-form did not jive well with the audience.

This Spizzwinks(?) album reminds me quite a bit of those Mendicants. While there are many contemporary songs on this album, the corny jokes and old-fashioned glee songs are present in full measure. I'm not sure the album will resonate with today's broader collegiate a cappella audience.

It's easy to see where they get some of their old-fashioned-ness, of course. The Spizzwinks(?) is the nation's oldest underclassman a cappella group, having been founded an astonishing 96 years ago. Fun fact from Wikipedia: the question-mark in the group's name occurs because the editor of the Yale Banner didn't know how to spell the name (it refers to a mythical creature). He added a question mark in parentheses to the headline announcing the group's foundation; they in turn liked the question mark and stuck with it. They are an all-male group, with 16 current members. And lest I appear too critical, I will freely admit that their humor and repertoire will almost certainly work well for people already familiar with the group.

Back to the album. The three "tropical bird" segments are spoken interludes with corny humor and sound effects. Why Should I Wake Up?, Nothing is too Wonderful to be True, and Ev'ry Time We Say Good-bye are very old-fashioned numbers song in block-chord 4-part harmony. Steamheat is from the classic musical The Pajama Game. More modern songs that most listeners will recognize include Somebody to Love (Queen), Grace Kelly (Mika), I'm Yours (Jason Mraz), and Billie Jean (Michael Jackson). (My own personal favorite was The Future Soon, by Jonathan Coulton (no relation ;-) ), a fun song that takes us on a journey as a boy who just got dumped looks to the future, when he'll be living in a science fiction world complete with warrior robots, speaking dolphins, and space labs.)

Past and present group members arranged all of the songs. On the more modern songs the group employed a fairly standard but simple contemporary arranging style: the solo containing the words, a bass line and perhaps three other parts singing various syllables, few duet parts, and little to no vocal percussion. It was obviously a very difficult task trying to merge past and present styles into a coherent album, and I give the group kudos for succeeding as well as they did.

Unfortunately, the old-fashioned nature of the album extends to its sound quality as well. Cause For Alarm would likely have been a nice-sounding album for 1998, but the bulk of it is sub-par when compared to the best collegiate albums of today. The three notable exceptions were Grace Kelly, Ev'ry Time We Say Goodbye, and Billie Jean, songs which had the full, rich sound of 2009 productions. All of the other songs sounded hollow to me, to varying degrees. This even includes The Future Soon, which did appropriately utilize autotuning for robot- and cyborg-sounding voices. That tended to be the biggest difference between songs which earned 3's from me and ones which earned 4's.

In summary, the blend between past and present made this an interesting album to review. However, unless a yearbook-style album was what they were going for, I think the group's recording efforts would have been better served by sticking with the more modern songs, a more consistent sound, and whichever producer/s was/were responsible for the three rich, full tracks mentioned above.