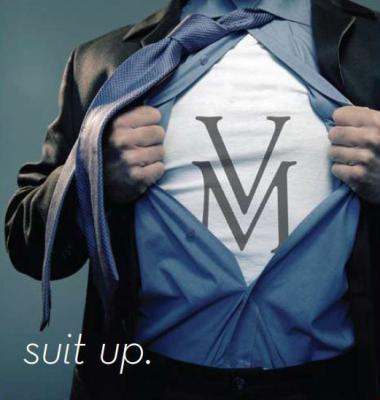 Brandeis VoiceMale brings exactly the kind of super-powered collegiate energy that an album title like Suit Up. demands. When the situation calls for rockin' leads and full arrangements, VM delivers. Power is what this group is all about.

Though killer leads seem to be everywhere on this release, I had a few personal favorites. Don't Stop Me Now seemed to genuinely channel rather than merely imitate the great Freddie Mercury. The balance of precision singing with moments of both emotional intensity and even abandon make this track a winner. (And after listening to a seemingly limitless number of poor Queen covers over my years of reviewing, hearing this gem of a track was both a delight and a relief.) The same can be said for Lately, whose lead does justice to the great Stevie Wonder and again without direct imitation.

Criticisms: while power is in easy abundance, VM could add just a little more subtlety to their music. To kick ass is great, but it's harder to appreciate as fully without a little more space, a little more build. Considering how tight the intonation is, the cut-offs are occasionally a bit loose. The blend is right on, but the tone color is a pinch more shouty than it needs to be. Though the backup syllables are generally well-chosen, there are a few times when they become distracting, stealing focus from the leads rather than supporting them. Finally, though the arrangements show both variety and an attention to musicality, a few bolder, more unexpected choices would have been appreciated.

In the end, criticisms fall to the wayside and Suit Up.'s indomitable energy and strong leads make this a recommended addition to your a cappella playlist.

Were you to convene a focus group to create a quintessentially average collegiate a cappella album, this group would give you VoiceMale's Suit Up. I can only assume that Brandeis has relocated to Peoria, Illinois. This is Cheerios with a teaspoon of sugar. It's Two if By Sea starring Sandra Bullock and Denis Leary. It's Vertical Horizon. Heck, the group even covers Vertical Horizon. This is the mean, which isn't to say it is mean. VoiceMale would never hurt you.

The album has all the hallmarks of average. Competent solos, "clean" production, cover art that seems to make sense but, upon further inspection, doesn't. The chords are in tune, but do not blend. The soloists hit the notes, but miss the spirit. It's all here folks. Consider this. Out of eleven tracks, two are Hanson covers ... of the same Hanson song. That isn't to say Suit Up. is derivative. There are two original tracks, one of which is named Please Don't Go. It sounds a lot like the other tracks on the album, which speaks well of songwriter Samrat Chakrabarti, but doesn't really help the listener. The other original, Time (Bring It On) is inspired by Seal, according to the liner notes. I don't know what that means, other than it probably creates some fascinating copyright issues insofar as it is literally true. It's pretty, overproduced, and repetitive, just like most of Seal's music, but I wouldn't call it inspired.

Alright, let's assign some props. Adam Levine can sing the panhandle off of Florida, and kudos to the group for giving him a chance to Idol-out on Lately. The arrangement does some nice work fiddling with Stevie's maddening chord progressions, though the finale does get a bit histrionic.

Ironically enough, the group finds a bit of rock edge just in time for the Vertical Horizon cover. The basses on We Are lay down a nice groove and the backing vocals seem to have a lot more fun singing words than nonsense syllables.

Alas, the edge arrives a bit too late for the cover Home. Truth be told, the original is trifling enough when it features Chris Daughtery's dynamic vocals. In this case, the hyper-literal solo and trebly backing vocals make it tonally indistinguishable from the Hanson track. Producer John Clark does the best he can to add life to the material, but the finished product remains listless.

And about that Hanson track ...

Where's The Love is a solid enough opener, insofar as it is energetic, but why commission a remix of the track to close the album? I am not particularly a fan of the a cappella remix generally, but this version in particular adds nothing to merit a second listen on the same album.

Off topic, but I remember when groups covered bands like Hanson ironically. It is odd that now groups are covering them (and their contemporaries and influences) in earnest. Isn't that sort of a reversal of the standard pop culture adulation-aversion-acceptance cycle?

At any rate, the problem with the populist approach is that it leaves so many opportunities on the table. Freedom! '90 has a killer bass line that gets buried underneath the wall of sound. Queen features melodramatic starts and stops that would make for great a cappella fodder if groups had the wherewithal to pay attention.

Listening to this album, it's clear that VoiceMale achieved what it wanted to achieve, and it's arguably clear that the group can sing. As a result, Suit Up. is a listenable album. But I can scarcely recommend you go out of your way to add more listenable to your collection.

So, you've probably heard Brandeis VoiceMale's infectious version of Where's The Love {Remix} on BOCA 2009. If you haven't, you should. The track has all the pop energy a compact disc can contain without exploding like piñata on an eight-year old's birthday. Undoubtedly I was excited to be reviewing Suit Up., VoiceMale's most recent release, hoping to hear an entire album with that much attention to detail, energy, and audio showmanship. After listening to the entire album, I can say that VoiceMale is not quite there yet.

If their BOCA track is a 5, the rest of their album checks in at an admirable and solid 4-4.5. Production is smooth, slick, and pleasant to listen to. Effects are appropriate and not over the top. The only misstep here is Queen's Don't Stop Me Now which comes across as stiff and uncompromising. Contemporary studios and their techniques seem to ignore the natural musicality and scope of songs from time to time. It's glaringly present in songs which use rubato, the natural slowing and speeding up of the music which creates mood in the song. Even though VoiceMale sounds fantastic on Don't Stop Me Now, you can hear how the tempo map has no intention of allowing soloist Adam Barish to provide any sort of interpretation, especially in the quasi recitative section in the beginning of the track (as is the case with a lot of Queen tracks). Whether this is the group's choice or due to the limitations of the studio, I don't know. I noticed this earlier in the year when reviewing On the Rocks's version of Josh Groban's Lullaby on The Green Room. I'm not sure what the solution is, but current methods are surely shortchanging these tracks which would have been lushly moving musical opuses in earlier years of a cappella recording.

VoiceMale has some great solo interpretations on this album. Although all are good, my hands-down favorite is Adam Levine's take on the Stevie Wonder track Lately. Adam has all the tenor nuance of Wonder, without the whiny-ness that we get with Wonder. You can even set aside the unrealistic and robotically performed drum track that comes in about a third of the way through because the solo is so outstanding. This is a CARA-worthy solo/track in my opinion.

The rest of the album has a nice pop sensibility to it (check out Where You Are) that occasionally grows tired when the album is listened to straight through. I could use a few more moments of surprise from an arranging standpoint as these arrangements become predictable after a few tracks.

I couldn't help but compare VoiceMale to The Beelzebubs from a recording, group sound, and soloist point of view. Where's The Love {Remix} is on the ‘bubs' level, while the rest of the album isn't. VoiceMale can rise to the level of the ‘bubs by picking a more diverse repertoire (aka: take risks) and taking their arrangements to the next level (aka: give the listener some surprises they can look forward to). I can tell you they aren't far away from reaching this level.

So, do you buy the disc? Well, if you own BOCA 2009 you already own their best work and you might be slightly disappointed. However, if you enjoy the sound of male groups similar to the ‘bubs and have a hard time finding enjoyable albums, this might be a good choice for you to pick up to satisfy that audio need.