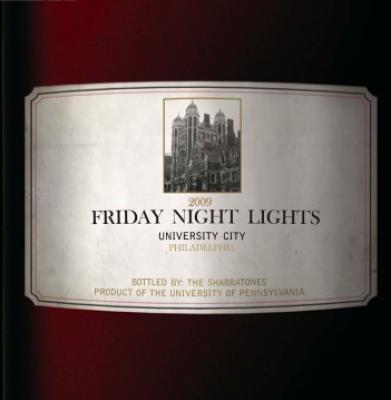 The Shabbatones' Friday Night Lights is a meteorite hurling towards the Earth, burning up the sky and leaving onlookers breathless at its mesmerizing intensity. While some subtleties have been brushed aside, there's no escaping the boundless energy and complete commitment of UPenn's mixed Jewish powerhouse.

Leads are raw, agile, and compelling. The fact that Hebrew, this album's dominant language, has a slightly more gutteral quality than English only enhances the intensity of these already emotional solos. As the singers reveal themselves, the listeners are drawn in, making even the language barrier seem inconsequential.

The Shabbatones' style is straight ahead rock, and in combination with attentive production and engineering, we never hear these tracks as karaoke. The Shabbatones actually rock, rather than merely performing rock repertoire. Again surprisingly, Hebrew only seems to assist in cementing this distinction.

I would caution the group about over-autotuning. The ‘tones have delivered absolute pitch perfection, but there are times when the razor's edge between dreamlike suspension of a cappella disbelief and a deeply alarming Stepford Wivery becomes blurred. There are imperfections that add humanity, and from time to time we miss them here. On the next release, I urge the group to preserve more of these even as they continue to airbrush their vocals.

I'd also have appreciated more in the way of dynamics. The excellent arrangements give us the illusion of dynamics by creating textural changes, but the back-ups could have done a bit more with their phrasing. That said, I can definitely understand how they might have had a hard time doing anything other than rocking out along with their leads.

If you like Hebrew rock (and four English rock pieces as well), all sung with endless heart, UPenn Shabbatones Friday Night Lights is not to be missed.

Even though there is nothing comparable to From Philly With Love's Habibi, the Shabbatones from the University of Pennsylvania deliver yet another satisfying amalgam of tunes on their new recording Friday Night Lights. The largely uptempo recording features an invigorating array of pop tunes that are a pleasure to listen to and dissect. The album ends on a whimper, which is unfortunate, but there are some amazingly fine selections to choose from in the remaining tracks.

I only have three overall negative criticisms that range from the least offensive to the most egregious: sound, arrangements, male soloists. The album is processed to within an inch of its life. Honestly, I don't know how "good" the group is because the production seems destined to illustrate the fact that nearly every vocal line has been passed through the old auto-tune mechanism. So sure, the background vocals on the album "sound" great, but it also sounds like you'll receive an electric shock if you listen to it anywhere near a pool of water.

The arrangements are pretty lackluster as well. Which is a shame. They aren't bad, but you get pummeled with some of the sameness of it all. Lots of block chords that don't have much pizzazz, except for Le'an She'lo Telchi. Something about that one hooked me from the start. The transitions are spot on and intelligent and the background has enough kick that supports Racheli Levinson's attention-worthy performance.

Another perplexing item on the disc is Kichlot Hakol Ve'Hatmuna. There are four soloists featured on the song (some good, some bad, I won't point out names because I don't know the voices well enough to do so, suffice it to say that girls=good, guys=bad). The song truly sounds like a mess; like four different tracks stuck together randomly. Nothing flows into the other section except the vocal part on the melody. Bizzaro.

Which leads to the guys. Ranking just slightly above painful, the testosterone in the group is most beneficial in singing background parts. Where the women (especially Rebecca Braunstein and Racheli) are bold, brazen, and bodacious in all the perfect ways, the guys are at best anemic and sometimes just full of nasal awfulness. Except on Tikva, the rap that is very reminiscent of Cut Chemist Suite by Ozomatli. JJ. Katz, Zachary Roseman, and David Droz bring the boom boom pow on that track. Thankfully most of the tracks on the album are female-led (the group knows when it has a good thing going), but I would plead with the men to invest more emotion into selling the song, especially if they don't have the raw talent.

In my last review of the Shabbatones, I made the following statement: "In a pipe dream of mine, they would forgo singing any more songs in English and concentrate on more of their foreign repertoire." That almost holds true in this instance because the standout tracks are Ahava K'tana, Tikva, and Le'an She'lo Telchi, but the group was able to do some real damage on Suddenly I See. It is excellent. I do suddenly see that I really, really like y'all.

The last time I heard the Shabbatones, I told them to amp up their energy. Well, mission accomplished. The energy on Friday Night Lights ranges from above average to moments of downright Off the Beat-esque aggression. The ‘tones came to play this time. Well done.

This album is a step up from their last in just about every way. In addition to much stronger energy and production values, the group has improved their arranging and solo performances as well. I sincerely applaud the Shabbatones for the work they've done over the past two years. It shows on this album.

Still, and I hate to be a downer here, I feel like I've reviewed this album before. Despite these dramatic improvements, Friday Night Lights still sounds like a dozen other Jewish a cappella recordings I've reviewed. The English songs are still noticeably weaker than the Hebrew ones (Leave Me Breathless is a very boring song choice for this group — nobody sounds as committed to it as they do to most of the rest of the album). The male soloists can't quite match the female soloists (a trend, it seems, in Jewish groups at the collegiate level — why?). It all feels very familiar and a bit boring.

The repeat listenability part of things really killed this album for me. My first listen was enjoyable, but I wasn't particularly intrigued by anything. By the end of the second listen I felt like I had pretty much gotten everything I was going to get, and my suspicions were confirmed by the third listen when I just wasn't engaged anymore.

Perhaps this album just isn't for me. There's nothing wrong with it in particular, but there's also nothing that I (and probably you) haven't heard before. It's a huge step up for this group, but unfortunately it doesn't break any new ground.

The best advice I can give the Shabbatones is this: keep doing what you're doing! Just because this album didn't connect with me doesn't mean that it won't connect with your fans. It's an incredible improvement from your previous work, and I'd hate to discourage you from making more excellent music. Catchier songs, or at least more consistent commitment to each song might rope me in on future releases. Now that you've got your sound well in hand, challenge yourselves to make every track exceptional. I'll be really curious to hear what you come up with.