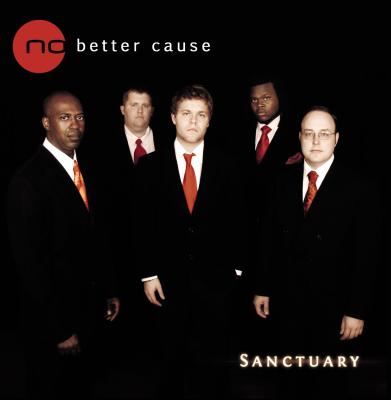 Sanctuary is off-kilter, like it's been rotated 35 degrees away from its surroundings. That's an awkward way to describe an album, but I'm hoping it will convey the somewhat awkward experience of listening to this one. I mean, a lot of things about this disc are shiny and nice. The overall vocal quality is pleasant. The vocal percussion is steady and engaging. The songs are favorites. Oh, but these things do not add up.

Tuning is the biggest culprit — it's gone missing in half the tracks, and not fully present in the others. That's not all of it, though. There's an extra out-of-focus quality about this disc. One factor may be this group's reliance on the screamy-tenor sound. Several of these singers do often sound like they're trying for a Scott Leonard-style belt. It may be that although they can get a nice tone up there, they just don't have the pitch control up in those heights. Maybe it's also the clash between tuning and production: it's such a nice, warm timbre, with what sounds like a lot of studio attention, and yet these songs do not add up. The auto-tune just couldn't get the chords to snap into place, and there's no live fuzz to blur the edges and make it work anyway.

Maybe that's it. Maybe some reverb and performance overtones would make it easier to enjoy this group and the obvious care they've brought to this music. There's a lot of joy here. Oh, Happy Day and Ride The Chariot show off the potential at work. That said, I just can't recommend this album. Take Immeasurable: catchy song, good groove, lot of energy, and woefully out of tune from the first doo-wop intro. The otherwise charming Goin' Up a Yonder floats above its tuning, instead of flying with it. And It Is Well with My Soul made me want to cry, just not for the usual reasons.

I wish this group all luck and hope they aren't too discouraged by this review. I don't really have any suggestions, for once. Rehearse more or get some vocal coaching, with an emphasis on pitch? And maybe make a live album.

A mixed bag of emotions occurs when you listen to the newest album by gospel quintet No Better Cause out of Lincoln, NE: excitement, deception, bewilderment, fear, intrigue, disbelief, embarrassment and a host of others that I could mention. This Sanctuary is not a home for the uninitiated. You'd have to be a previous fan to enjoy more than 10% of the album.

The album is a bit deceptive as the first track Ride The Chariot is truly outstanding. It rocks and lulls you into a sense that these guys are possibly the next big thing on the Christian music scene. It has life, and excites you with the groove and power and passion that the guys possess.

And then the rest of the album follows.

I was bewildered at the lack of tuning that occurs consistently on most of the tracks. Key changes are attempted most notably in two transitions in Sanctuary that never fully lock. I fear that the tenors screaming in their upper registers have forgotten that they are not pretty-sounding when they stretch like that. I was intrigued by the inexplicable pattern change in the drum breakdown of Shut De Do (one of my favorite songs since the late '80s).

The blend completely disappears on numerous occasions, which leads me to believe that the guys have never sung together or that they listened to the playbacks of their recording sessions and decided, "Yes, this is the best take of that song to accurately represent our sound and be placed on the album for all to hear." It Is Well with My Soul is the worst sinner — verging on the embarrassing. More often than not, it sounds like the guys completely gave up on making music and just let the spirit move them.

The only caveat is that the bass is spot-on throughout (even as the soloist on Joshua Fit The Battle of Jericho). He is amazing ... when you can hear him. Sometimes the mix is so low you have to strain to latch onto the nuggets of goodness that he provides. And the drumming is often riveting and funky and fun. As yes, the standard is that if you are paying attention to the drumming, something is wrong. That holds true here. But I wanted to give him his props for being really good.

In another stab at good news, I really enjoyed the solo on I Want Jesus To Walk with Me — and the original tune Immeasurable was nice and jaunty and lifted the spirit.

Addressing the fundamental tuning, blend and musicality issues would serve the guys in No Better Cause well. That way new and old fans will be able to appreciate the joy in the messages of their songs without wincing or feeling like they were on the wrong side of The Crusades.

There is not a lick of excellence on Sanctuary, the latest album from No Better Cause. The album reads as a spiritual tract: earnest but not at all compelling. From vocalists of this caliber, we have every right to expect better. And better they have delivered, with Arrival in particular. That album was a testament to the power of an organic sound. Sanctuary is a testament to the drawbacks of this approach.

We hear arrhythmic percussion, unlocked chords, and more than a few scuttled key changes. Shut De Do is an exercise in losing a tonal center. Oh, Happy Day does nothing to help the listener find it. As the irony meter drops, so, too, does the level of soloists. A number of soloists endeavor to take on It Is Well With My Soul, but to no avail. Why assign solos that extend beyond the soloist's range?

Gone is the immediacy of the group's prior work. We are left with uninspired production, and thimba-dooba bass lines. Among the worst offenders is Immeasurable, which is simply poorly sung, and also features much arbitrary starting and stopping. What happened here?

This is an emphatically Christian album. The men of No Better Cause offer this work as a praise to God in Heaven. Fair enough, insofar as God is God. There will be critics who bemoan the perceived proselytizing on Sanctuary. I am much more troubled by the succession of lazy "ooh"s and "aah"s in the background, and the lack of dynamics. Is God the ultimate mezzo forte? At the metaphorical pearly gates, do these guys really want to present their rendition of Shine Down? One gets the impression that musicality took a back seat to the message.

There is just enough production here to sap the life out of tracks like Goin' Up a Yonder, a tune that is not particularly conducive to contemporary pop recording sensibilities. Many tracks suffer from an anachronistic juxtaposition of hymnal reverence on boy band verve. In particular, the resident kick drum effect sounds like the fuzzy jolt of bass, transcribed by cheap headphones. It renders the gospel rather robotic.

There are moments of inspiration. The group succeeds with the chordal flourishes which typically mark the end of tracks on Sanctuary. These guys sing well together when they aren't trying too hard, and the arranging here could one day yield some fine performances. The original take on Wade in the Water exudes the sort of confidence I appreciated on Arrival, and the Awesome God cover spins some gold over a hokey melody.

But there is no getting away from the fact that Sanctuary is a step back for a promising group. These men certainly believe in their cause. It's their responsibility to make us believe in their music.

To order this album, visit the group's website, CDBaby, or the iTunes store.